Who the Heck Consumes His Capital?! 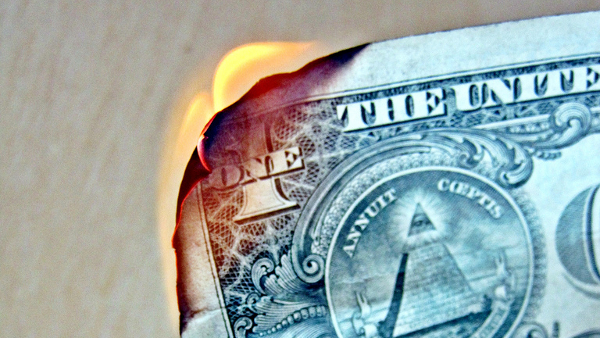 I have been writing about consumption of capital, using the example of a farmer who sells off his farm to buy groceries. It’s a striking story, because people don’t normally act like this. Of course, there are self-destructive people in every society, but, not many. Most people know not to spend themselves into poverty.

To make people hurt themselves, we need to add the essential element: a perverse incentive. Consider a parlor game called Shubik’s Dollar Auction. You auction off a dollar bill, but there’s one extra rule. The second highest bidder has to pay his bid, getting nothing in return. This game works best with a large crowd, so that several people bid before they think too much about it. Then the participants become ensnared. There is always an incentive to raise the bid by a penny. Would you rather pay $1.01 to buy a dollar, or lose $1.00 and get nothing? The same incentive works at $2.01, $3.01, and so on. There is no limit to how high the bidding will go, until someone gives up in disgust (and anger at whoever ran the game).

This game can make people overpay to win a dollar. How perverse is that?

It’s easy to see through this simple game, and many people will refuse to play. There’s only one way to push everyone into such a scheme: force. Let’s look at monetary policy in this light. When the Federal Reserve dictates interest near zero, everyone has to play under that rule. It causes some perverse outcomes.

Those with access to the Fed’s dirt-cheap credit can borrow to buy bonds, mortgages, or other assets. The result is rising assets and falling yields. With every increase in bond prices, there is falling yield purchasing power. This makes it impossible to live on the interest, forcing retirees to liquidate capital to buy groceries.

Let’s consider this from a different angle. Suppose you own a home. If you mortgage it, does that make you richer? Would you spend the borrowed funds like you would spend income? Of course not. What if someone else borrows money to buy the house from you, at a higher price than you originally paid? “Aha,” you say, “that’s different!”

Is it? At first, it may look like a capital gain. However, your gain is possible only because the next guy borrows more. Why is he doing that? With a lower interest rate, the same monthly payment covers a larger loan.

Suppose the rate keeps falling. One person after another buys the house, handing a profit to each seller. Each seller is given the incentive to spend some of his gain. However, nothing has been produced though this entire series of transactions. If nothing is produced, then what are these successive sellers consuming? They consume something that was previously produced. It’s otherwise known as capital.

This is a perverse incentive in action. Outside Shubik’s game, a dollar does not sell for $5. Outside central banking, capital is not destroyed en masse. While any fool can dissipate his inheritance and any farmer can sell his farm to fund his drug habit, farms are not destroyed. They are transferred intact, to more rational neighbors. Once back in responsible hands, they quickly return to productive use. A free market has no mechanism to cause all capital to be destroyed simultaneously.

The Fed does. We should call its game Shubik’s Wealth Effect.