The Fake Falling Deficit and the Phony Unemployment Drop 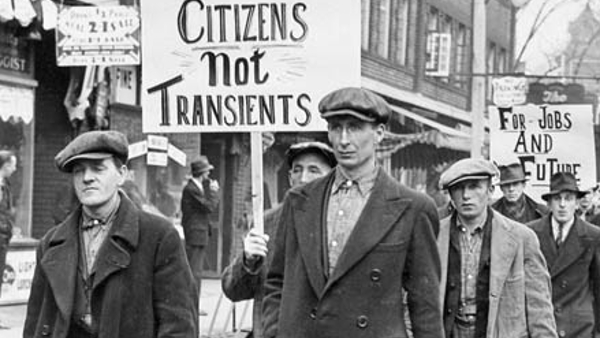 The Single Men’s Unemployed Association parading in Toronto, Canada (circa 1930)

The good news is that unemployment is going to continue to decline, says a new research note from investment house Goldman Sachs. The bad news is that doesn’t mean you’ll necessarily have a job as the joblessness rate continues to decline.

“The unemployment rate is falling,” reports IBT, “but that traditional sign of health for the American worker can be misleading. A larger share of the U.S. population is now out of the labor force than at any time since 1977 — an era when manufacturing was king and most women didn’t have jobs. As the drop in workforce participation continues to vex economists and policymakers alike, Goldman Sachs economists are projecting the trend will roll on.”

More and more people are voluntarily opting out of the workforce, and while some of that can be pinned on an aging workforce, much of it— almost everyone agrees— is because this economy blows chucks. It’s thus more likely that the trend of dropping labor force participation rates will continue, reports Goldman analysts. That in turn will artificially lower unemployment to rates not seen since those heady, good economic times we enjoyed under the George Bushes.

That’s what it has come to now: the Obama-Sanders-Hillary coalition has so broken the economy that if you give up looking for work, you stop being a part of the “problem” and start being part of their “solution”.

In other words, Democrat math has it that everyone will be employed just as soon as people stop wanting jobs.

If you are confused by this then you probably aren’t a Goldman analyst, at least one of whom seems to be confused as a Democrat looking at a federal budget.

“The downward revision to our participation forecast has directionally hawkish implications for monetary policy,” says David Mericle, a New York-based economist at Goldman according to Bloomberg. “Nevertheless, it is also worth keeping in mind that our results still show a considerable amount of remaining labor market slack, which is consistent with the continued softness of wage and price inflation.”

Excuse me if I inject a little reality into the “good-news-unemployment-is-falling” chorus, but you don’t get higher prices when fewer people have jobs.

And that my friends is what a lower labor participation rate means: fewer jobs, for fewer people, with lower economic growth.

Much of what is wrong with our country can be pinned on the predictable, but ignored demographic trend that more people will retire, while insufficient population growth by either birth or immigration will leave fewer workers to support those who don’t work.

In other words: Tax revenues will to go down just at a time when federal outlays will start to soar.

And that of course only makes those jobs that are disappearing through voluntary divorce from the workforce much more vital than they would have been at any other time in our history.

The whole sad mess is an indictment of poor fiscal policy, the enshrinement of the social state and government by hindsight, rather than foresight. A good immigration policy bringing in more people from around the globe who truly love and understand America— and there are many of those— versus those who can just walk in would be helpful here.

Today federal types are tutting congratulations to themselves as the sixth consecutive decline in the federal deficit comes in at “only” $435 billion. But that’s just the calm before the deficit storm breaks upon us in earnest. Without a solution the deficit is expected to be running back in the trillions within ten years.

And whatever solution Congress and some other president are intent on crafting, that solution would look better if it started with jobs.