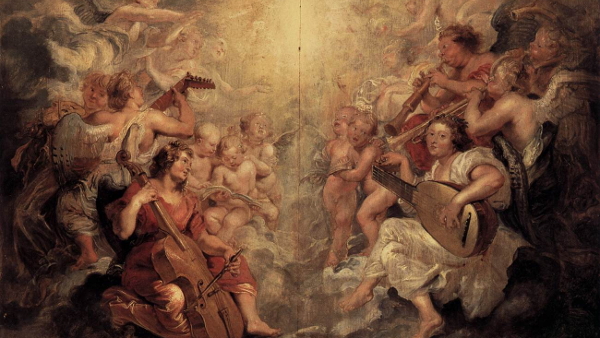 AND THE ANGELS SING

We meet, and the angels sing

The angels sing the sweetest song I ever heard

You speak, and the angels sing

Or am I breathing music into every word

Suddenly, the setting is strange

I can see water and moonlight beaming

Silver waves that break on some undiscovered shore – Then

Suddenly, I see it all change

Through it all your face that I adore.

You smile, and the angels sing

And though it’s just a gentle murmur at the start

We kiss, and the angels sing

And leave their music ringing in my heart. 1

I believe that when we struggle to raise our heads above the storm clouds we can hear the Holy Spirit speak to us. I also believe that in my stubbornness I have missed probably 99 percent of what He has tried to tell me over the years. Ah, but that one percent! That includes the wonderful song lyrics to, “And The Angels Sing,” a big band hit back in 1938-38.

Now at Hannukkah, the Festival of Lights, I am reading about, in 2nd Maccabees the “hopeless” war by the Jews under Judas Maccabeus won against the Selucid Empire that had invaded the Holy Land, desecrating the Temple, humiliating, torturing and killing some 40 percent of the population.

Looking to heaven and listening to the voices of the faithful now long gone Judas Maccabeus’s rag-tag army expelled the much larger enemy from land and Temple. As if that victory was not enough of a miracle, and with only enough oil to light the Menorrah for a day, but eight days needed as part of the re-purification ritual, its eight lamps miraculously burned for the entire eight days!

But in less than a lifetime the Greeks were replaced by the Romans and some 200 years after that the entire city of Jerusalem was destroyed, and the Temple wiped out forever! But adding to Judaism, the coming of Christ and Christianity added an eternal and universal sense of direction, a beginning, purpose and end to life, opposed to the seemingly endless cycle of wars and only brief periods of peace throughout previous human history. And in 2,000 years Christianity has managed to survive every assault, including from within.

Of course the Continental Army’s situation at Valley Forge at Christmastime, 1776 was at least as hopeless as, say, the Maccabees, or of European Christians greatly outnumbered by Muslims at Lepanto in 1571. But Washington, inspired in prayer and against great odds crossed the Delaware and though greatly outnumbered reversed the fortunes of war, beating Hessian mercenaries and Cornwallis—and, many believe helped by the Holy Spirit, saved our Revolution.

World War II’s Battle of the Bulge launched against the Allies in December, 1944 was, another seemingly hopeless struggle fought under bitter cold and storm clouds. After the famous prayer requested by Gen. Patton the skies cleared just long enough for Allied aircraft to pound the Germans into retreat, leading to Hitler’s suicide some four months later.

Now as storm clouds gather for World War III, some see the end of the world and return of Christ. Whether you buy into this apocalyptic vision or not, our Flat Earthers, our Lemming Class of rulers, unable to see above the clouds are dragging the entire world’s economy into a Perfect Storm of economic, government and societal collapse. And they cannot apparently even envision a merely earthly purpose and end.

Much greater than the promise of the Maccabees—that only bought some time for Israel, is the promise of Jesus Christ. God in the Manger offers the only eternal way out from under the storm clouds of human existence. Someday whether we die free of mortal sin will be all that matters, eternity above or below the storm clouds– only much more. It means either unimaginable heavenly bliss or unspeakable hellish horror.

Contemplating gathering storm clouds reminds the pilot of the saying, “Keep your head up and fly the airplane!” Then following thought, seemingly from nowhere: “And the angels will sing!” The angels sang at Christ’s birth and they will sing again for those who survive the ongoing earthly onslaught of sin, and make it out of the clouds, with the help of God’s grace, into heaven.

Michael Smith, “When Pigs Fly, Mankind’s Quest for Salvation Without God” – the title of an upcoming book I will probably never get around to writing, but a great title, huh?

(One gets chills reliving these old tunes and their performers from very early childhood, listening to them on the radio, and wearing out Dad’s 78’s on his Sears Silvertone record player, that required standing on a stool to reach up and heft that weighty tone arm.)

1 Adapted by trumpeter Ziggy Elman from a Yiddish Krezmer tune, “And The Angels Sing” was a work of musical brilliance, and a 1938 for him and his orchestra on Bluebird. Benny Goodman made it an even bigger hit in 1939 after Mr. Elman joined his band, lyrics added by Johnny Mercer, and the vocal by Martha Tilton. Of course, the clarinet was by Mr. Goodman. (Thanks to Youtube for all of this – and more!)