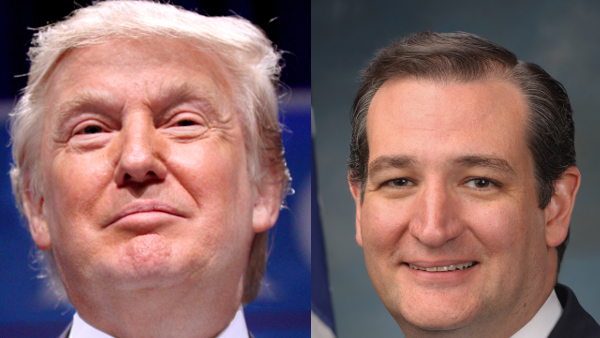 The preliminaries are over. The real presidential campaign begins.

Cruz and Trump have so far maintained a nonaggression pact. Cruz and Trump, both winners by nature, are all in to win. Political mortal combat cannot be far behind. Here’s what that looks like right now.

Trump is sounding rattled. Understandable. Cruz quickly has rocketed up to what Newser calls a “dizzying” 10 point lead in Iowa. Trump has plateaued there.

Trump has to react and soon. May already be too late. Reaction is perilous. None of Trump’s other genteel rivals, except for Carly Fiorina, were hard counterpunchers. Cruz, a tough guy, doesn’t flinch. He knows how to land a punch. Just ask the GOP Establishment.

And Trump’s initial test-feints have been very weak. They suggest that Trump either is confused or anxious.

Part of Trump’s narrative is that he’s “The Inevitable Winner.” Losing in Iowa would make him a Loser. Trump just hates losing. And he hates Losers. So, presumably, do Trump’s fair-weather-supporters who only are with him as long as they can say they are “with the Champ.”

Add to Cruz’s strong conservative base Iowans who are looking to climb on the Winner’s bandwagon. Trump, by hammering home the case people should support him because he was the frontrunner, unwittingly turned himself into Cruz’s de facto PR agent. At least in Iowa.

More than that fracturing of Trump’s narrative, losing is likely to shake Trump in a way that nothing else does.

Let’s peek behind the bluster.

As the Washington Post’s Francis Stead Sellers astutely reported in What Trump Learned On The Apprentice:

From the time they spent with Trump on and off the set, contestants recall a talented performer — and one who was deeply concerned with how he was perceived by others. Just as Trump today speaks frequently of his poll numbers, so, too, was he consumed by ratings.

On a morning after “The Apprentice” lost to a rival Fox show, “American Idol,” Solovey visited Trump to introduce him to his fiancee — and found the usually ebullient businessman slumped at his desk.

“It was the only time I saw him totally downcast and dejected,” said Solovey….

Elizabeth Jarosz … remembered that she happened to be standing close to Trump after he finished a press interview. He turned to her. “How did I do?” he said. “Was that okay?”

“I remember thinking, ‘Wow,’ ” Jarosz said. “He was very insecure. And that’s not how he seems now. Now he seems not to care. But I think he really does care.”

Cruz may be getting inside of what is known in military parlance as Trump’s OODA Loop.

Trump showed his first, uncharacteristic, failure of nerve – and made his first unforced error – just before Halloween when, then lagging in the Iowa polls behind Dr. Ben Carson, as reported by The New York Times:

Donald J. Trump pledged to redouble his efforts in Iowa on Tuesday, sounding stunned and chastened that he had lost the lead in the state. “What the hell are you people doing to me?”

The Christian Science Monitor’s Peter Grier gets the metaphor of this fight exactly right in his recent column How Donald Trump might jiu-jitsu Ted Cruz. But from where I sit Cruz, not Trump, looks like the judo master. Grier:

Donald Trump may be getting ready to slam Ted Cruz.

Why? Mr. Cruz is threatening Mr. Trump’s lead in the crucial early caucus state of Iowa. And the Texas senator reportedly told a gathering of donors earlier this week that he doubts Trump has the “judgment” to be commander-in-chief.

All this appears to have convinced Trump to punch Cruz’s coordinates into his insult artillery, despite the fact that the two of them have maintained cordial relations to this point.

“Looks like @tedcruz is getting ready to attack. I am leading by so much he must. I hope so, he will fall like all others. Will be easy!” Trump tweeted on Friday morning.

“@tedcruz should not make statements behind closed doors to his bosses, he should bring them out into the open – more fun that way!” Trump tweeted Friday.

Cruz semi-privately raised the matter of Trump’s judgment recently.  Cruz hardly could have intended this comment to remain behind closed doors. Looks like Cruz intended to bait Trump into throwing the first punch.

Trump of course is right in that “it will be more fun” to litigate Donald Trump’s judgment in public.

Does Trump understand that Cruz is a master litigator?

Trump is dead wrong in his assessment that it “Will be easy” to get Cruz to fall as have others.

Cruz responded (to Trump’s tweets) not with a knockout but with a nuzzle. “The Establishment’s only hope: Trump & me in a cage match. Sorry to disappoint–@realdonaldtrump is terrific. #DealWithIt

Jiu-jitsu? Ted Cruz now has Donald Trump in a squeeze play. If Trump balks he looks weak. If Trump goes after Cruz, Trump will be playing right into Cruz’s hands by presenting himself as an Establishment stooge. One misstep by Trump could prove politically fatal to the Trump campaign.

All of the insults available to Trump to throw at Cruz are likely to blow up in Trump’s face. Trump’s recent calling Cruz a “maniac” caused Rush Limbaugh to present a “stinging critique” casting doubt on Trump’s conservative credentials, and Mark Levin, another powerful influence on the conservative base, to rain fire from the talk-show heavens on Trump. This will cost Trump in the polls. Trump: hoist with his own petard.

“In honor of my friend @realDonaldTrump and good-hearted #Maniacs everywhere: https://www.youtube.com/watch?v=8NjbGr2nk2c …”

Maybe not. But his underpinnings have been rattled.

What’s up with that? Here’s what.

Donald Trump is a kid from Queens.

So too, from Queens, were the fictional, beloved, Archie Bunker, Doug Heffernan, Carrie, and her wacko father, Arthur. Beloved, yes. But presidential timber? Forget it Jake; it’s Jamaica Estates, Queens.

I, too, am a kid from Queens. (Started life in Jackson Heights.) And I’m a galoot to boot. I get Donald Trump. I don’t support Donald Trump. Not even close. He’s no conservative.

But I find him fundamentally lovable. What’s not to love about the big galoot?

Trump’s economic policy isn’t really a policy; it consists of claiming magical abilities to reclaim the jobs that foreigners have stolen from us, and a ritual genuflection toward lower taxes. … Trump’s argument is pretty much entirely “strangers stole your stuff, and I’m going to make them give it back, or at least keep them from stealing any more.

“Texas Ted” Cruz, in addition to himself being, like Trump, elemental has the added strength of offering real clear, shrewd, conservative, supply-side prescriptions such as an almost deficit-neutral flat tax and the gold standard. Cruz, unlike Trump, is not relying exclusively on galoot charm and “magical abilities.”

Not all voters are as prone to believing in magical abilities as do us kids from Queens. Advantage: Cruz.

Trump is rattled. Will he lose his nerve and show that he lacks the judgment that Ted Cruz so shrewdly called into question? Will Trump demonstrate the lack of presidential disposition that most Republican voters feel is his biggest weakness? If that happens tonight it will be on to the finals: Cruz vs. Rubio.

A version of this column originated at Forbes.com.