The Pact With Palin 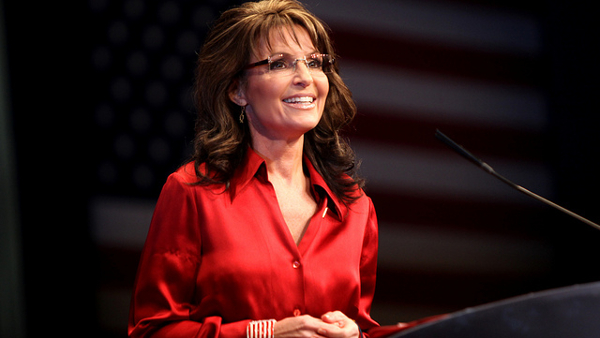 By the time it actually became news, it was already old.

Listeners to talk radio in New York were calling the Joe Piscopo Show during that morning drive convinced it was going to happen.

On my way to the airport in NYC I heard news reports of a private plane leaving Anchorage and heading to Des Moines.

By midday a snarky Cruz staffer had posted a picture on Twitter that supposedly insulted Palin. The picture was Governor Palin standing next to Ted Cruz and the caption read “she knows how to pick winners.”

For some reason Bristol Palin took umbrage to it and went directly to her blog at Patheos and barked out a post about how mean Cruz was and she hoped her mom endorsed Trump just to spite him.

Then sometime between my take off in NYC and my connection in Phoenix Sarah Palin made it official, she’s throwing in with the Donald.

What he’s promised her, what it holds for her future, nobody knows, but Donald Trump believes he’s taken the final card out of the deck.

To in essence take a mentor of Cruz and to make her betray him, in Donald’s world, this is something he admires.

Color me unimpressed. Unimpressed with the Donald anyway.

Though these formerly conservative women do have me perplexed.

Phyllis Schlafly, Ann Coulter, and now Sarah Palin, I used to hold all of them in high regard.

I used to admire them for their unswerving devotion to truth, principle, and good.

I used to ponder how they found the courage to stand in the face of such reprehensible onslaught from the left for the duration of their careers.

But I guess truth doesn’t rank as high for them as it once did, principle is relegated to a sideshow, and truth?

How can they truthfully say that they are willing to fight the good fight and be used like pawns by one of the least principled men to ever rise?

Donald Trump might well become President, he might honestly believe the things he claims he does now. But for women who have spent their public lives and careers noting the inconsistencies of liberals, it seems that they are having a hard time recognizing one right in front of them.

So Ann, Sarah, and Phyllis answer me these questions:

I’m not asking any of these questions as snark. I’m genuine. Genuinely baffled at the lack of scruples you are showing in lending your voices to a man who has trouble explaining his way out of a paper bag.

And if you follow through with your support for him Ms. Coulter you owe a lot of genuine conservatives a LOT of apologies.

My only other thought on this is that I honestly believe none of you matter on this issue.

There is little evidence that Donald Trump has brought in ANY new voters into the Republican primary race.

And that means he is likely going to be disappointed on Caucus night in Iowa.

But not nearly as disappointed as I am in what you three have allowed to happen to your otherwise notable service to the conservative movement.

How A Failed Commune Gave Us What Is Now Thanksgiving... November 25, 2020 | Jerry Bowyer

Profits Are A Blessing, Not A Curse November 25, 2020 | Roger McKinney

The GOP Should Embrace Its Reputation As The Party Of Financial Success... November 19, 2020 | John Tamny

Look For Companies With Blockholder Investor Base... November 19, 2020 | Jerry Bowyer

Here’s The Conservative Agenda For The Next Four Years... November 10, 2020 | Frank Vernuccio

They’ve Been Writing America’s Obituary Since Before It Was America... November 10, 2020 | John Tamny

Reining In The Proxies: A Letter To Secretary Of Labor Eugene Scalia... November 10, 2020 | Jerry Bowyer

A Review Of The Gini Coefficient November 3, 2020 | Jim Huntzinger