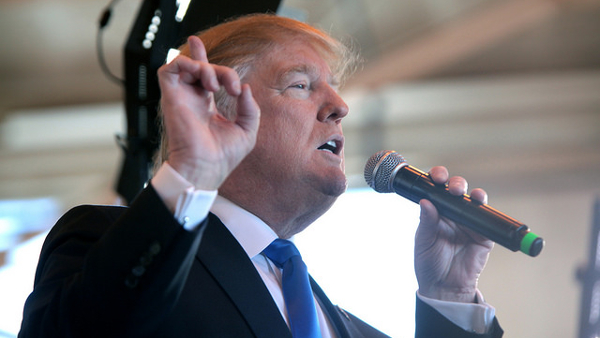 Why do people support Donald Trump’s presidential candidacy? According to Andrew Prokop, the most common reason given is that: “He can’t be bought.” What’s wrong with this popular perception is that it is demonstrably false: In his quest to win the White House, Trump is selling out America to pander to corn farmers and ethanol manufacturers. As Trump sizes up the game (probably correctly), if he wins in Iowa (the first primary and the one in which Cruz is closely contesting), he may gain enough momentum to, as he says “run the table,” winning the subsequent primaries.

So what’s the deal? Hmm… How could a New York-values politician persuade Iowans to ignore conservative principles in a Republican primary? Aha! Ethanol! Iowa produces 30% of this nation’s ethanol, that government-required fuel additive made from corn. And so it is no surprise that the self-congratulatory deal-maker, “The Donald” (as he is affectionately called by cooing Fox News contributors), is making campaign promises to increase the ethanol mandate in America.

So, what’s your problem? The problem is that while this is probably a great deal for both Trump and for Iowa, it is a bad deal for America. A recent essay in the National Review lays out a few of the many reasons: 1) ethanol additives cause increased corrosion in gasoline engines; 2) diverting corn into ethanol drives up the prices of groceries, costing Americans about “$3.5 billion” each year; 3) because vehicles get fewer miles per gallon out of blended fuels, Americans end up spending an extra “$10 billion” per year; and 4) there is no clear case that can be made that there are any environmental advantages to current levels of ethanol that are mandated into American gasoline.

And Trump wants to INCREASE the mandated ethanol levels? Of course he does! It’s “the art of the deal.” He wants to win, so it costs American motorists tens of billions per year. That slogan you hear that Trump wants to “Make America Great Again”? As they say in New York: “Forget about it.”

James E. McClure, PhD is a professor of Economics at Ball State University and writes frequently for professional and popular economic journals.