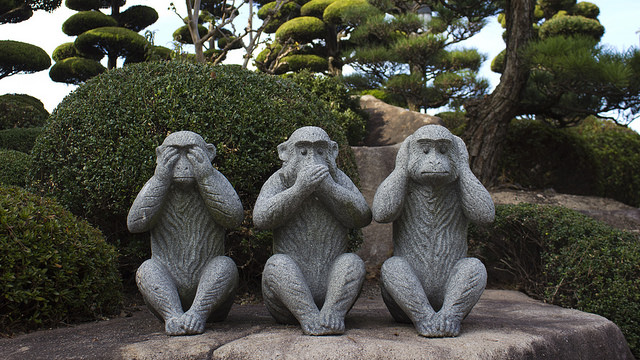 Sensitive souls may want to avert their eyes or seek intellectual cover.

I’ve had it up to here with the smugly self-righteous pronouncement of many of the black lives matter devotees from whom I’ve heard so much in recent days. Most of these folks have nothing to useful to say — nothing beyond an extended whine that persuades nobody not already in agreement with them. They rely, unwittingly, on the patronizing generosity of a white establishment which, ironically, doesn’t take them seriously enough to vigorously criticize their inanity. They lack intellectual depth, rhetorical subtlety, moral seriousness, and political commonsense. They’re an embarrassment, frankly.

I mean, shouting-down Bernie Sanders because he doesn’t think that identity politics should trump (pardon the pun!) the class struggle? Idiotic. Infantile. Sophomoric. This witches brew of vacuous politics combined with self-righteous moral certitude, is the bitter fruit of one of the colossal intellectual failures of our lifetime — the feckless and unimaginative reactions of the left to the persistent subordinate social status of something like a third of the black American population — now a half-century after the height of the civil rights movement and the launch of the Great Society.

Homicide among young black men is a catastrophe — full stop. The state of family life among poor African Americans is dismal (though one is definitely not supposed to notice). The huge incarceration disparities by race (of which I have been a pioneering critic) nevertheless reflect profound disparities in anti-social behaviors by race which warrant to be directly addressed, but which dare not be mentioned in polite company. The gap in acquired intellectual functioning between adolescents and young adults of different races — as reflected in every available measure — is simply stupefying, a first-order social emergency in this country with profoundly deleterious implications for the prospect of achieving genuine racial equality.

Rather than confront these realities, a seemingly inexhaustible stream of talking heads busy themselves with papering over these palpable failures — employing a conceptual vocabulary honed in the 1960s and 70s, and resurrected seemingly without modification or critical evaluation over the past decade. They somehow think it is an argument to merely point a finger at that amorphous enemy called “structural racism.” Magic words the enunciation of which is meant to dispel all doubts about the mysteries of social causation.

Transparently, these arguments — in the face of the unfolding train wreck at the bottom of black society — are nothing but an attempt to change the subject. I mean, celebrating the one year anniversary of the “murder” of Michael Brown? (This was the characterization of one such talking head on Meet the Press last weekend…) I mean, putting the photo of his father on the front page of the NYT — letting everyone hear from the family of this latter-day movement hero, lest the “sacrifice” of this “martyr” be forgotten? Have they no shame? Will nothing shake them from their certitude — not even seeing the commemoration of last year’s “uprisings” in Ferguson marred with yet another young black man’s body lying face down in a pool of his own blood, having been shot by police when, again, this was the end of an altercation entirely of the young man’s making…