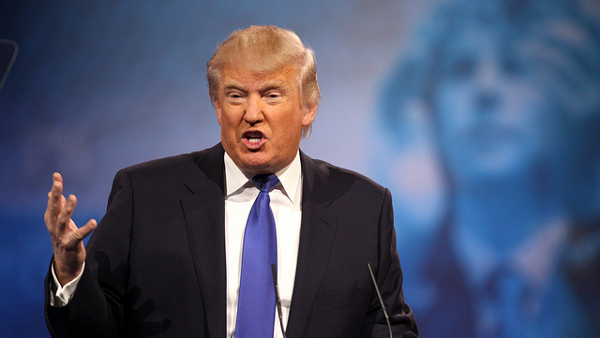 While Ted Cruz technically won Monday night, the real victor was Marco Rubio. And while he technically came in second, the real loser was Donald Trump – and the betting markets show it. After holding a substantial lead over Rubio in betting markets for over two weeks, his odds dropped dramatically. 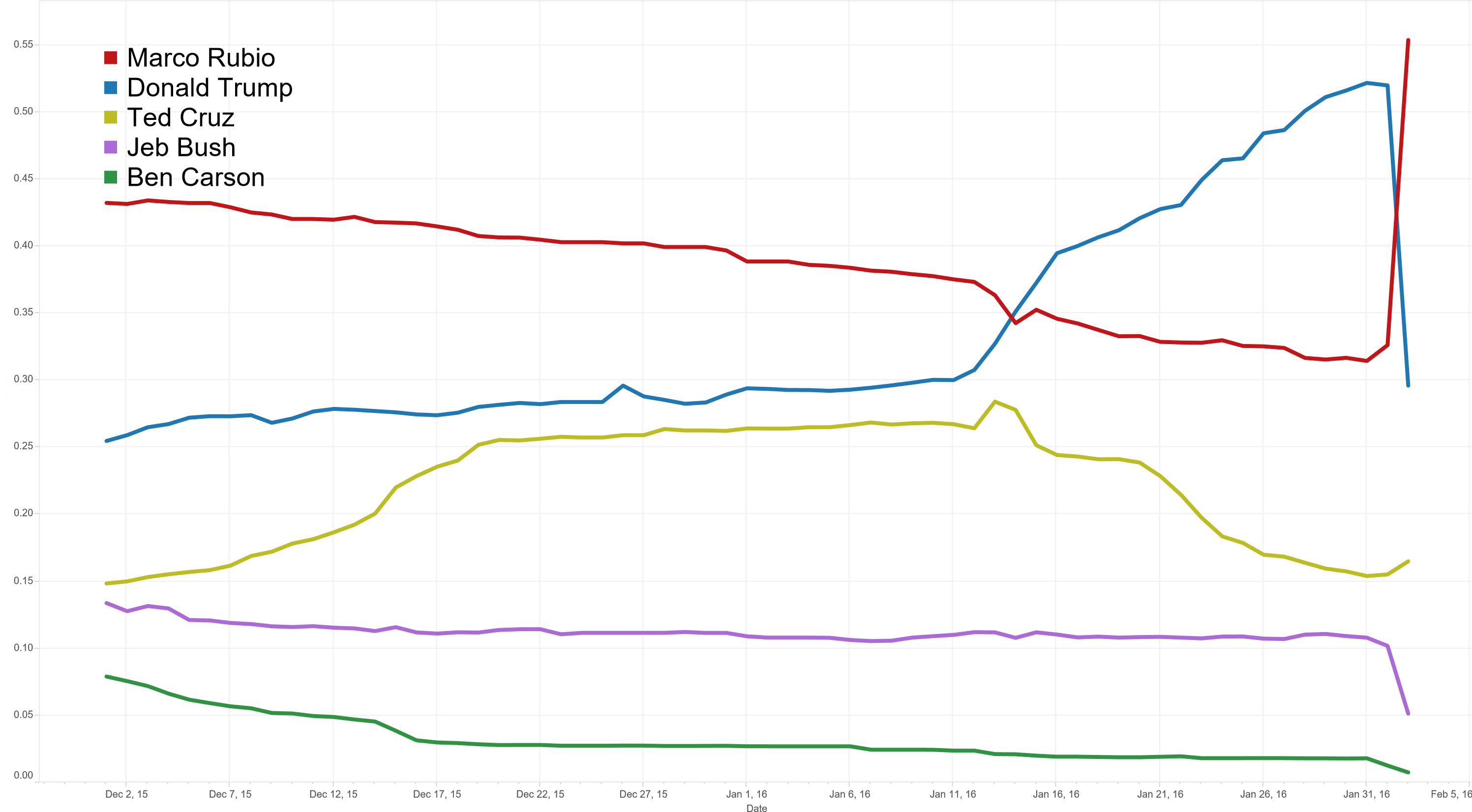 Trump has been a heavy favorite in our average of betting markets for several weeks, while Rubio fell. But in the immediate aftermath of the Iowa caucus, Rubio and Trump essentially switched places, with Rubio now a favorite against the field at about 55%.

The big question hanging over Trump’s campaign was whether his massive lead in polling and non-stop media coverage would translate into actual votes. To some extent, it did. Sure, he underperformed polls by 6-8%, but that’s not totally off the mark, by the standards of Iowa’s notoriously unreliable polling. Trump’s support was overblown, but not by a massive amount. However, the factor against Trump that was not anticipated was people who were deliberately voting against him.

An early story-line Monday night was record voter turnout for the Republicans. Of course, this was considered a good sign for Trump. But entrance polls indicated that many people were turning up to vote against Trump, motivated more by a distaste for Trump than a liking for any other candidate – though Rubio was the clear beneficiary of this. In fact, Rubio had more people decide to vote for him on the day of the vote than any other candidate. This is the unexpected negative side-effect of Trump’s constant media coverage.

Trump has consistently had the highest net unfavorable ratings of any candidate, both nationally and in Iowa. He had a net unfavorable rating of 37% in Iowa the weekend before the caucus. Somehow, that factor – people who were so worried about a Trump win that they showed up to vote for Cruz or Rubio just so Trump didn’t win – was not anticipated by the media.

Trump’s problem is that, while he does have a core of voters that represent somewhere between 15-25% of likely Republican voters, that’s never going to be enough to be the nominee – let alone to be the President. Trump’s constant media coverage encourages dedication in his supporters; while encouraging resentment and annoyance in everyone else. The simple fact is that more people dislike Trump than like him. The members of the Republican base that are understandably angry at the establishment and clamoring for an outsider candidate enjoy Trump’s rhetoric, but those voters who already had a negative view of him or his message will be energized to vote for either of the likely alternatives. In a way, Trump was the main driver of events Monday night. He just didn’t drive them in the right direction.

Rubio is the big story coming out of Iowa. He was polling at about 15% prior to Iowa, and ended up with 23% of the vote, within 2,000 votes of Trump, who finished at 24%. Furthermore, none of the establishment’s preferred candidates had good showings.

While the likes of Kasich, Christie, Jeb, and maybe Fiorina will stay in until after New Hampshire, their abysmal showing in Iowa has sent a clear message to the donor class: Rubio’s the best you’re going to get. He’s not an establishment candidate – in fact, he was one of the many senators, including Ted Cruz and Rand Paul, who won their elections riding the wave of the Tea Party, fighting against establishment Republicans. But he’s the most acceptable to the establishment of any candidate who has a chance at winning.

What Iowa solidified for Rubio was that he’s a top tier contender, that he’s the only viable choice for the establishment, that his appeal is broad enough to win in a state that he’s put relatively little money and time into, and that the tens of millions of dollars spent on attack ads against aren’t enough to override his highest-in-the-field net favorability ratings. The question is whether the remaining candidates polling below 5% will drop out in time to allow the anti-Trump vote to coalesce around a single candidate. The results in Iowa indicate that it will happen, and the candidate will be Rubio, but we won’t know for sure until after New Hampshire – at the earliest.

Cruz winning in Iowa is neither unexpected nor particularly important. He’s spent more there than any other candidate, he had more volunteers, and he’s a perfect candidate for the state. He’s probably the most conservative of any candidate, and is a clear, dedicated, and vocal Christian. His campaign is built around high voter turnout in places like Iowa and South Carolina more than broad national appeal, like Rubio’s. He fits the mold of the previous winners, Huckabee and Santorum – though he is angrier and more energetic than either of them, but that goes for the base in general this cycle.

Cruz, interestingly, got only a slight bump in the betting markets after his win in Iowa. Still, Cruz did win, and by a slim but not razor thin margin, and that cements him as a viable alternative to Trump for anti-establishment voters, and a not-unlikely contender for the nomination.

Unless we see some huge, unexpected change, it looks very likely that this is going to be a three man race between Cruz, Rubio, and Trump. That may all change after New Hampshire, but for the time being, Rubio is the favorite of the betting markets, and looks to be in a solid position for the contests in February.