Open Letter to Donald Trump: Be Tougher Like Jesus. 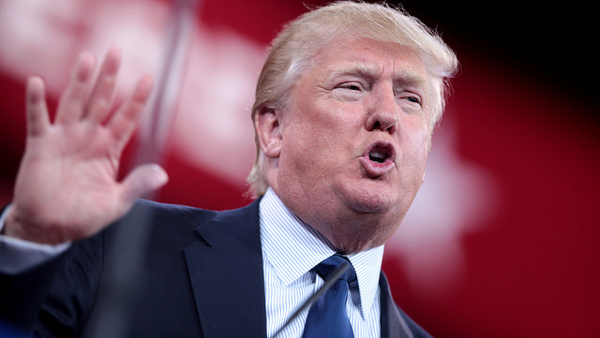 Donald, you’re tough. The brilliance of your social charisma is tremendous. Your hair is almost as good as mine. However, if you and I were racing from a pack of wolves, you would lose due to your shorter size and smaller gait. It’s true. It’s totally true.

But I like you as a person. You take risks to make things happen. You don’t accept stupid paradigms. You understand what moves people—desire and passion. And I have to thank you for making a holy mess of the political class.

But Donald, your policies are a little weak. Maybe a lot. I get it, you’re a Wrestlemania Hall of Famer and you know how to work a crowd. But your pushes are a little stiff. Your platform plays it too safe. I have to be honest with you, it’s a little timid.

Remember when you went Jell-O with “Stone Cold” Steve Austin at Wrestlemania 23? He stunned your head in front of 80,000 cheering fans—that’s almost triple your Birmingham rally. The crowd roared as they saw you crumpled there with shaving cream on your face. I know Vince McMahon paid you well, but it looked weak. Soft. You know as well as I do that politics is pro-wrestling: performance art. That dazed face you gave? That’s your current platform.

Now that you’re self-funding, you have an amazing opportunity to rethink your policy strategy. Face it, there is a reason the Bible is the no.1 all-time best-selling book—by a lot—to the uh, number 2 The Art of the Deal. Jesus is the world’s greatest master of social transformation. He embodied an aikido-like strategy in his Kingdom of Heaven vision for society—one that is still unfolding.

Your name is on some of the world’s finest hotels and resorts. But empires have been created in Jesus’s name. Cities. Religions. Scientific discoveries. Hospitals, okay? Yes, sometimes we got his message wrong, but his name has a power that, 2000 years later, civilizations still want a piece of.

Jesus’s approach to making the world great again is called nonviolence. But believe me; it is so much tougher than your current platform. It’s not passive like you were with Steve Austin. It is a proactive approach that allows the bloat of evil to collapse under the weight of its own force.

Peter tried to stop Jesus when he heard he was going to take up his cross. Peter wanted Jesus to package up the grassroots messianic movement they had going and take the throne of Israel. There, he could use violent force to start winning against the Roman occupiers and corrupt religious elite. You know what Jesus said to Peter’s suggestion? “Get behind me Satan… you do not have in mind the things of God, but the things of men.”

2000 years later, no one cares about King Herod. The Roman Empire is dead. And people still want to be like Jesus.

Turn the other cheek.

As president, refuse to carry out the drug war. Let the power of the drug cartels’ monopoly profits collapse under the weight of market competition and church and community-funded treatment centers. How’s the drug dealer going to be able to terrorize the neighborhood if he can’t compete with safe, online recreational drug ordering? Drug addiction is very bad, but the man you bear as your identity—“Christian” means “Jesus imitator”—says you cannot repay evil with violence. Remember, Al Capone was defeated by ending Prohibition.

Same with prostitutes. You promised to protect women. Bring the most vulnerable ones out of the shadows of a violent black market and treat them as humans deserving of dignity. Ending mass incarceration of sex workers will further dismantle the cartels that abuse them.

Don’t play it safe by forcing young adults to pay into Social Security when you know it’ll be empty by the time they retire. Look at the debt, Donald. Be bold. Let young adults opt out. Cover the shortfall by ending our international policing and use the savings to pay seniors what they put in.

If China wants us to walk a mile, walk another mile with them. It reverses the power dynamic.

Donald, a voluntary market exchange is not a zero-sum, win-lose situation. If you treat it as one, it makes you weak and insecure. Voluntary exchange between free people is the vehicle to prosperity for the least of these in any nation. Lead by example. Get rid of corporate subsidies, taxes and regulations that chase jobs overseas and cripple American companies.

The Bible talks about honest weights and measures. You know the monetary system we are forced to use is a dishonest game that benefits the special interests that get to use new credit first. Use the nonviolent power of competitive pressure to defeat the Federal Reserve.

You may be the president of America one day, but Jesus is still the king of history. You’re tough. But Jesus doesn’t need a body guard. He wants people in positions like you to imitate him. Don’t let fear move you to violence. Take up your cross and watch how weak evil really is.