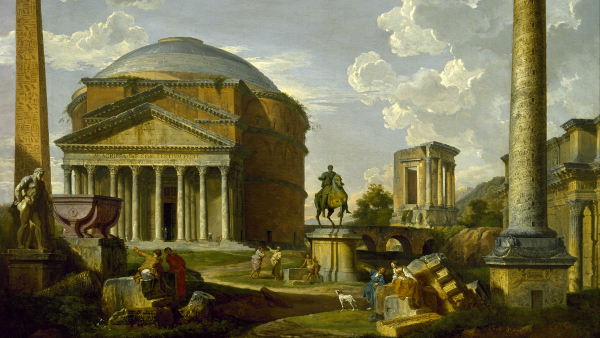 The burial of Antonin Scalia provides thought provoking insights into the limits of utopian appeals of American progressive politics in an age where contemporary culture has engulfed traditional insights into the informing relation between conscience and an objective moral order as the source of public policy, family law, jurisprudence, and sexual ethics. In a sentence, militant, progressive secularists have moved to destroy the very theoretical foundations of our political order.

Previous revolutionary regimes throughout the 20th century sought the destruction of political, social order through overt means of anarchy and war; today’s fight is far more abstract, for the battlefield upon which progressives seek the complete, total amelioration of the human person is the nature and meaning of conjugal relations. Coitus was traditionally referred to as a marital act because of the explicit teleology (order) residing in the act itself. Its components form a relation that cannot be constituted by language or law. The interior components of conjugal relations are intrinsically undivided; the amative, unitive, and procreative components are constitutive, meaning that order here isn’t assigned, commanded by authority, or discovered by pure reason. Simply put, the conjugal act reflects a deeper understanding of the structure of reality and the purposes embedded in human nature itself.  It is this nuptial reality that Justice Scalia sought to defend. Politically speaking, he tried to keep the moral sources of liberty tied to ethical realism. He sought to defend the foundational role the creative order has in defending moral norms.

Why is this significant?

Because the threats animating militant secularism seek to deny that man has a nature; they wish to substitute will for reason as the governing principal in human affairs. What they deny is any conception of a rationally ordered universe. They seek to replace nature and its interior ordered components, subordinating reason for imposed authority.

The theoretical foundations of America’s political order are being assaulted, the postulate “the laws of Nature and of Nature’s God” matter, for the normative, informing relation between public and private life rest on an indissoluble whole: the nature of humanness.

Strike at the heart of this reality and everything hangs in the balance: marriage, education, psychiatry, jurisprudence, and public policy.

How do we recover from this onslaught? We begin by defending the theological foundations of culture. We defend the moral foundation of liberty itself.

We should remember that modernity is nothing less than a perversion of Orthodox Christianity. This insight will move into greater relief as the west struggles with Islam’s concept of property relative to the status of both women, conjugal relations, and the limits of western positivism. Both obscure the gift of realism that underwrites the cogency Christian ethics permits in its defense and articulation of the informing relation between the created order and moral norms, the status of conscience, the limits of secular law and how the family resides as the final source grounding the achievement of human identity as singular, unrepeatable, and Trinitarian.

For the west to recapture the terrible beauty that is human identity under the barrage of positivism will require a titanic philosophical effort analogous to great exploration. A rearguard action of immense proportion fit for our time. First, we need a historical look at the nature of human personhood (identity), property, sexual ethics, and the social, political impact of Christian revelation.  Why? Because the moral foundations of western culture are threatened by militant secularism and Islam’s overt juridical definition of personhood, both have identical sources of error, namely erroneous applications of reason relative to the created order.

The very first Roman poet to examine early childhood was Statius who lived during the time of Emperor Domitian (81-96 A.D.) In his writings Statius writes of his joy in the presence of a boy child in his household. Further examination reveals that the baby is not Statius’ son but his slave. This boy was termed in Roman times as ‘Verna‘ meaning ‘house-reared‘. It is probable that the child is the offspring of Statius’ own household slaves. This makes the boy strict property, to be shaped and dispensed with according to Roman law. Let me translate: the boy’s early years would most likely be spent ministering to his owner’s sexual desires. As shocking as this is to modern sensibilities, adult-child relations in past civilizations are not uncommon, yet exceedingly difficult for historians to mine. Nevertheless, by the standards of contemporary Roman society, Statius’ relationship with his ‘verna‘ was clearly quite normal. House-reared slaves would play a variety of roles from surrogate son to erotic plaything. All of this is examined in Christian Laes Children In The Roman Empire:  Outsider’s Within and Veronique Dasen’s Children, Memory, Family Identity In Roman Culture. Both publications are outstanding examples of how best to view the congruence animating both secular, militant thought concerning sexual mores and an identical crisis underwriting Islamic difficulty in countering western sexual norms. Both reveal a crisis of reason.

Both authors reveal what most sophisticated readers already understand: ancient Roman society was not interested in child development. The very concept of human identity is finally resolved with Chalcedon around 450 A.D. The eastern Church Fathers (specifically the Cappadocian Fathers) formulated an understanding of human personhood (identity) that was primarily a liturgical, sacramental reflection on revelation. With the forgiveness of sin came a new idea: the indissoluble nature of human identity itself; unity and plurality, united within a concrete ‘singularity‘. Nevertheless, identity during ancient times was an undifferentiated morass. For Romans and other regimented societies (think Sparta), humanness was a social category. Whether or not a twelve year old child was regarded as an acceptable sexual partner was determined not by biology, but by the child’s social status. The same held true for work. To be fair, sexual advances toward a freeborn Roman child of any age, male or female was punishable by death! But notice, the absolute relative status of personhood in ancient societies. This neatly fits our contemporary ‘progressive’ view regarding any extension of applied legal positivism to evolving secular norms regarding sexual ethics, property, and militant, autonomous reason.

The social status of identity was resolved by the Orthodox Church, fixed by the American Revolution, and ratified by Lincoln. In our rush to be acceptable to our ‘progressive‘ vision, we have thrown overboard all traditions. We have now arrived where we began: an understanding of human identity as an undifferentiated morass only complicated by the resurgence of technology and a flaccid cultural vanguard unwilling to defend the glory of a Tradition that granted the successful Civilization that the West had become!

But all is not lost, the Roman Imperium was defeated and the west continued to provide the only true solace: a true, real alternative to the inhuman idealism that grounded previous civilizations; human identity as an unrepeatable, indissoluble unity, a creative progeny unalloyed from the call of love itself. The embodiment of Triune life.

For contemporary readers, the individual does not embody the starting point for discerning moral norms’ relation to positive law, conscience, and the immutability of the created order as constitutive to Judeo-Christian morality, the family is.

The question for today is this: who among us is ready to defend that gift.

The field is open and the battle is already joined!