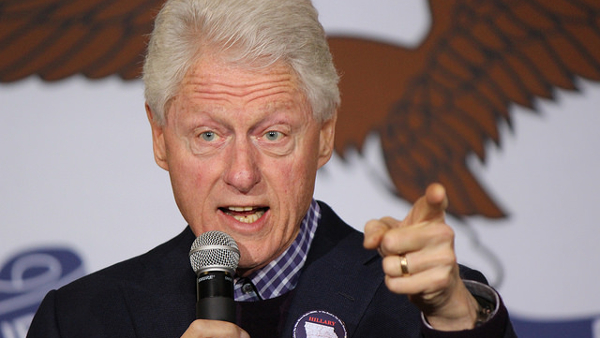 Today’s racial liberalism is largely defined by this attitude: “Say ‘black lives matter’, and not ‘All lives matter’! Don’t you get it?”

This flawed posture has been uncritically embraced across “progressive” America. But, just last week, Bill Clinton said some stuff that cuts against this grain. And, what most struck me about the former President’s remarks was Clinton’s anger, and his air of bemusement, with the Black Lives Matter folk.

I was also taken aback by Michelle Goldberg’s reaction to this brouhaha (at Slate) — to wit: “Hillary Should Fire Bill Clinton.” How dare he clash publicly with BLM-protestors at that rally in Philadelphia? “He might as well have said, ‘All Lives Matter’,” Goldberg concludes. (See? We’ve always known that he’s tone-deaf. Remember the South Carolina primary, 2008?)

This all-too-predictable liberal reaction to Clinton’s tirade — what will no doubt become the liberal party line — really struck me, too. It struck me, because the wily master politician Bill Clinton is anything but tone-deaf. And, I am pretty sure that Goldberg is exactly wrong!

My contrarian’s reading of the situation is that we’re experiencing just now what I — a card-carrying economist, remember — like to think of as an RLB: a “Racial Liberalism Bubble.” For my money, racial liberalism’s “stock” is way over-valued. In effect, they’re bluffing. I.e., they’re playing a losing hand but hoping to win nevertheless by forcefully daring their opposition to call them on it. (Nobody wants to be thought of as a racist, after all.) Now, Clinton’s outburst (and the Trump boomlet?) are evidence that this is so. True, racial liberals seem to believe their own propaganda. But, and mark my words here, in the long run there’ll be hardly anyone else left in America who does.

Here’s a case in point: I heard a formerly incarcerated black man in his 30s say, on KQED recently, that Bill Clinton must be held responsible for him having been imprisoned, citing Clinton’s harsh anti-crime policies! The moderator reported all of this breathlessly, as yet more evidence of the alienation and the subjugation of the black masses. But to most Americans, including many black people, that whole narrative is just complete BS. In reality, everybody knows that having served time is primarily evidence of the past bad behavior of a particular young man. Everybody knows that, in the vast majority of cases, you actually must have done something wrong to end-up in prison. Moreover, and thankfully, most of us still think that the difference between acting rightly and acting wrongly is a distinction worth insisting upon.

I have been broodingly unhappy about the “race debate” of late, and I think I have finally figured out why: It’s dishonest. On crime and policing. On affirmative action and diversity. On welfare policy. On America as an open society. On the politics of immigration. On the causes of poverty. On education reform. And, the thing it’s most dishonest about is the tragic reality of black failure. Racial liberals, in a bid to hold onto the moral high ground, have foisted a narrative that overstates the responsibility of “racism” for blacks’ poor social outcomes, and that refuses to impute fault to blacks ourselves, when that is appropriate, for our own actions, values, beliefs, practices, efforts, and achievements — or, again where appropriate, for the conspicuous lack thereof.

With “black criminality” — I know; I’ve just used some very bad words; there is a white conservative somewhere who will take heart; shame on me! — flourishing at an epic scale; with the body count escalating in Baltimore, St. Louis, Chicago, Philadelphia, Detroit, DC, Oakland, Houston, Cleveland…, racial liberals proffer the morally, politically, and sociologically naive idea that poverty and “structural racism” are alone to be faulted. They advance the puerile notion that mounting an angry street protest and self-righteously seizing a microphone are effective responses to the present-day conditions of personal insecurity for black bodies — responses deserving to be sympathetically received. These ideas are articles of faith for racial liberalism. But, they are unsustainable as credible claims with the broader American public.

So, we’re in an RLB — a Racial Liberalism Bubble. A great many otherwise sensible people are rushing headlong into making some very bad political bets. For those still in touch with reality, Bill Clinton’s tirade in Philadelphia should have exposed just how bad these bets are, with his pointed rejoinder (How Dare He?) to Black Lives Matter.

I wonder if anyone took note of this:

“I love protestors,” said President Clinton. “But, here’s the thing: when they won’t let you answer, it’s because they’re afraid of the truth.” He’s right. And, they have very good reason to be afraid.

Now, if only I could figure out how to “short” Racial Liberalism’s “stock.