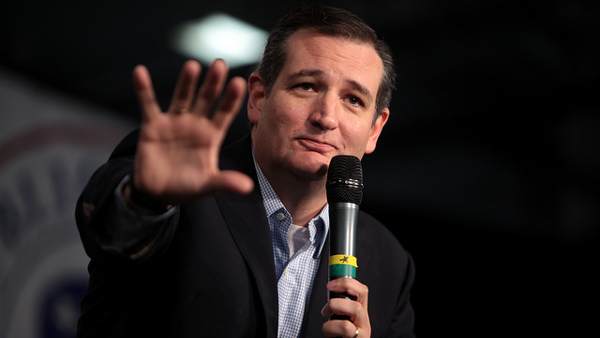 For most of the campaign so far, Ted Cruz has repeatedly stressed his deeply-held religious beliefs and ideological purity. He’s mocked the Republican establishment, emphasized the importance of his faith in every stump speech, debate, and town hall, and positioned himself as extremely hard-line on immigration. This was a deliberate strategy to give him an advantage early in the primary process, when most of the states voting were southern and Evangelical. The problem for Cruz is that all of those states have already voted. In order for him to be successful in the remaining states, he needs to change his rhetoric. And he has, though most people haven’t noticed it.

The clearest indicator of this is how he’s responded to questions regarding his religion. In the early months of his campaign, whenever he was asked “How important is your faith to your politics,” he would spend several minutes going into detail about how religious he is and how central religion is to his life. He once said that anyone who doesn’t start every day praying on their knees isn’t fit to be president, and often prayed at his rallies.

But that’s changed in the past month. Now his response to the faith question is to emphasize that he isn’t running for “pastor-in-chief,” that he doesn’t like politicians who “wear their faith on their sleeve,” and that he isn’t trying to force his religion down anyone’s throat.

In answer to a question on immigration, he responded largely in Spanish, and repeatedly referred to the Hispanic community as “our community,” emphasizing the “shared values” between Hispanics and Republicans. He hasn’t reversed his immigration policy, which is the most hard-line of anyone running for President, but he’s now highlighting his ethnicity and his father’s immigration story more frequently than he did months ago.

These are all reasonable statements, but they paint a very different picture of Ted Cruz than we’re used to. He’s subtly changing his persona without contradicting himself. He’s always left enough ambiguity in his statements that he can change his positions without really changing his positions. Take his proposal regarding patrolling Muslim neighborhoods, for example. What Cruz actually said was that we should have an increased police presence in neighborhoods that are at higher risk for radicalization. That’s a perfectly reasonable, pragmatic proposal. The mainstream media, however, spun it into a statement about how all Muslim neighborhoods should be patrolled more regularly than other neighborhoods. The latter position, though it was fabricated by the media, is popular among registered Republicans. When the general election campaign starts, Cruz can state what his actual proposal was, which will help him with swing voters without alienating his core constituency, because he’s not actually contradicting himself.

Trump, on the other hand, has no such leeway. His statement calling for a moratorium on immigration from Muslims simply cannot be nuanced or moderated in a way sufficient to win him support from moderates.

In a general election, Cruz could appear to soften his position on immigration without directly contradicting his earlier statements. Cruz says he wants to deport anyone who came here illegally, and to bar them from re-entry. But he’s never said that he wants to send law enforcement into people’s houses and drag them out. In a general election, Cruz could say “The law is the law, and if we know that someone is an illegal immigrant, we have to deport them, but we’re not going to go out into the world looking for people to deport.” He could also mention that he supported increasing legal immigration back in 2013. It won’t be easy for him to shake-off the label of being an immigration hawk, but he should do much better among Hispanics than Donald Trump. Cruz has been much smarter about his rhetoric than Trump, carefully choosing his words to appeal to diehard conservatives, while also leaving himself enough ambiguity to transform himself into a viable general election candidate without alienating the base. As I said in my last column, I don’t think any Republican has a realistic chance of beating Clinton in November. But Ted Cruz is certainly in a better position to do so than his rivals.