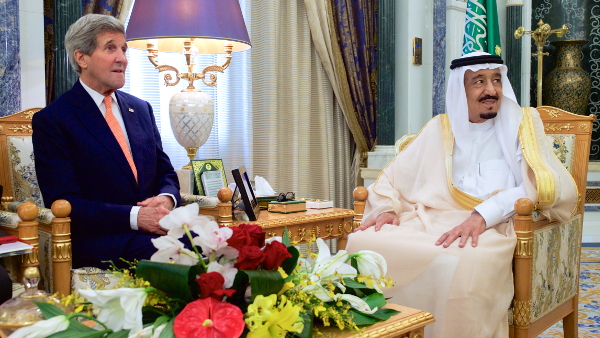 Saudi Arabia is in a more precarious economic and political situation than it has been in decades.

The bi-partisan push in the House to release classified pages of the 9/11 Commission Report has been resisted by the Obama administration, and terrifies the Saudi regime. So much so that the Saudis have threatened to sell off their dollar reserves and liquidate their US-based assets. Why should a few pages of a simple report, and a bill allowing the families of 9/11 victims to sue Saudi Arabia, be so worrying to Saudi Arabia that they would sell hundreds of billions of dollars in US assets? Because these proposals are coming at a time of extremely high instability in Saudi Arabia. The Saudis are so worried about the implications of these bills now, because they are in such a precarious political and financial situation. Any bad press that encourages distrust or dislike of the Saudi government in the US will only make the Saudi’s situation worse.

In addition to being a long-time ally of the United States, a major trading partner, and a counter-weight to Iran, Saudi Arabia holds over $100bn in US debt. In difficult fiscal situations, the Saudi government can sell off this debt. In the past year, the Saudis have sold roughly 6% of the US debt holdings. The Saudi government deciding to drop most of its dollar denominated assets would be another factor undermining confidence in the US and the dollar as the world’s reserve currency, to say nothing of the short-term market consequences.

The Saudis’ present troubles demonstrate the consequences of diminished US power and interest in international politics. When a superpower that has been the primary player in a region as conflicted and violent as the Middle-East begins to retreat, you see the extreme economic and political instability that is now plaguing Sunni Arab states such as Saudi Arabia. Saudi Arabia’s instability is mostly their own fault, but their current dilemmas are exacerbated by an on-again-off-again, manic-depressive US foreign policy, that oscillates from the hyper-involvement of the neo-conservatives to virtual isolationism.

In the absence of US leadership, states that have historically relied on the US for financial, political, and military support are going to look elsewhere for protection. China and Russia, for instance. And they are going to be hit by instability and uncertainty. No American ally in the region has been more affected by our retreat than Saudi Arabia.

In the realm of geopolitics, Saudi Arabia is now in a position where their greatest foe, Iran, is no longer considered a rogue state, and where their greatest ally, the United States, is increasingly uninvolved and uninterested in their region. The existence of the Islamic State has forced Saudi Arabia into an awkward position. Using military force in earnest against the Islamic State has a large cost. At a time when the Saudi government is cutting government spending, particularly in the form of welfare, they are spending more money than ever before on the military. Essentially, the Saudi government is saying to their own population, “We’re going to fire you from your public sector job, and instead use that money to drop bombs on a Sunni Arab organization that you probably support.” Members of the radical Sunni sect of Wahhabism funded the terrorist organizations that eventually became the Islamic State, and there is widespread support for IS in Saudi Arabia. Perhaps most importantly, the extent to which the Saudis weaken the Islamic State is the extent to which they strengthen Iran. For a decade, from the fall of Saddam’s regime in 2003 to the rise of the Islamic State in 2014, Saudi Arabia had been Iran’s primary geopolitical enemy. IS has now replaced Saudi Arabia as the most active opponent of Iran and their interests.

But, on the other hand, if the Saudis do not use military force in earnest against the Islamic State, they allow a terrorist state that might eventually threaten Saudi Arabia for Sunni dominance in the region to grow. Inaction also hurts the Saudi relationship with more enthusiastic opponents of IS, such as the US and Jordan. The conclusion King Salman of Saudi Arabia has reached is to be part of the military coalition opposing IS, but in a relatively minor role. The relative inaction of the Saudis in the coalition is one of many factors hurting their relationship with the US.

Saudi Arabia is also engaged in a proxy war with Iran in Yemen. The lack of central government and security anywhere in Yemen has allowed the Islamic State to establish a presence there. Reports indicate that there as many as 8 fully-fledged Islamic State terrorist cells operating in Yemen. Bombings committed by IS militants killed 140 people in Yemen last year. Yemen has not become an IS stronghold in the same way that Libya or even Afghanistan have, but the presence of IS in a country with a very porous border with Saudi Arabia is no doubt concerning to them. al-Qaeda, an organization that has largely been forgotten since the Islamic State gained notoriety, has once again become a significant security problem in Yemen.

This is the consequence of the instability the Saudis have fomented in Yemen. Their constant power struggle with Iran has put them in a security dilemma in Yemen, Syria, and Iraq. As they support Sunni rebels and governments, they decrease stability. These unstable environments create opportunities for militant groups hostile to Saudi Arabia, including Sunni ones like the Islamic State, to establish themselves. Even if they don’t attack the Saudis directly, their existence and success contributes to increased radicalization in the Gulf states, which in turn makes the Saudi government and its allies less stable.

This is to say nothing of the dire economic conditions facing King Salman. The Deputy Crown Prince has been put in charge of the regime’s economic reform project, “Vision 2030.” Vision 2030 is designed to reduce government spending and reduce the state’s reliance on oil for revenue. Cutting government spending is, of course, the right idea for Saudi Arabia. The state is the largest employer in the country, and government jobs tend to be high-paying and, to put it bluntly, easy. Government jobs in Saudi Arabia function largely as welfare.

That sort of system is fiscally untenable, as the workers are getting paid more than they’re worth, and it’s bad socioeconomically, as it fosters a level of complacency and state dependence in the population that creates long term problems.

Any attempt to fix this will no doubt be met with resistance by the workers who are going to be fired or have their pay docked, but it’s necessary to restore the budget to normalcy. As is their privatization plan, dealing with the large state-owned oil producer, Saudi Aramco. There are tentative plans to privatize Aramco, which would be one of the largest IPOs in history, but even that wouldn’t be sufficient to achieve the economic transformation King Salman is pursuing. The private sector represents less than half of total economic activity in Saudi Arabia. That needs to change, and that change be achieved by selling off a few state-owned enterprises here and there. A Thatcher-esque massive privatization program should be the goal of the Saudi government.

And not every aspect of the “Vision 2030” plan is positive. The plan also calls for increasing tariffs, infrastructure spending, and preventing firms from hiring foreign workers. The Saudis are trying to simultaneously cut spending in some areas, while raising it in others; and liberalize the economy in one sector, while de-liberalizing it in another. On balance, they’re moving in the right direction, but they’re also making small steps towards unhealthy economic isolationism.

Ultimately, what we’re seeing with Saudi Arabia is a likely preview into how the world looks when the US backs off. The Saudis are faced with severe long-term economic problems, and a security crisis. They are taking steps to rectify these problems, but some of them – the protectionism in particular – are counter-productive, and they’re likely to produce more short-term political instability.

These are the consequences of Saudi governments refusing for years to cut government spending and entitlements, and diversify outside of oil; and for relying solely on the US for political, military, and financial support for decades. And these are the consequences of the US allowing itself to become the primary actor in the Middle-East since the Kennedy administration, then suddenly retreating in the Obama administration.