Another 1776: Would An Armed Revolt Work Today? 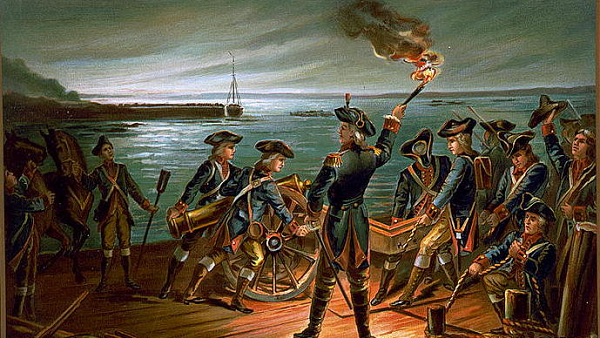 Yesterday I attempted to ignite a debate (not a revolt) about the State of America now compared to 240 years ago, when we abolished the authority of the British government over our affairs.

If we take a WWJD approach (What Would Jefferson Do?), we find that the preconditions for revolt are:

The government becomes destructive of the proper ends of government which are the protection of life, liberty and property and/or pursuit of prosperity. This does not mean that a government should be abolished if it fails to perfectly protect these foundational rights. Such a principle would lead to chaos since no government can possibly protect us perfectly.

After all, the government which the founders created was not a perfect Jeffersonian paradise. It permitted national deficits which Jefferson and others believed violated the liberty of future generations. The government founded a national bank funded with taxpayer dollars which the Jeffersonians believed was an exercise of power not enumerated by the Constitution, and therefore a violation of the limits which were placed on the government in order to protect the taxpayers. But Jefferson did not call for an armed revolution against the nascent republic. He even participated in the compromise which led to the creation of the bank.

All governments which have ever existed have sometimes protected and sometimes attacked the foundational rights of life, liberty and property. What triggers the right of abolition according to the Declaration of Independence is whether, all things considered, the government is a destroyer rather than a protector of those rights.

But even if the government goes so far as to become a net destroyer of liberty, even that is not sufficient logical grounds on which to abolish it. If the point of a declaration of independence from a government is to end the condition of vanishing liberty, it follows inevitably that such a declaration would only be advisable if the new government were to be a better protector of our liberties. My friend Glenn Reynolds, law professor and Instapundit, says that revolutions are like throws of the dice. You just don’t know for sure what you are going to get.

This is not a trivial point and the many revolts since Independence Day 1776 tell us that the odds for improvement are actually quite poor. After all, we the people pretty much get the government we ask for. The policies we have in place now have not been imposed on us by some foreign army; they have been imposed on us by us. What reason do we have to believe that we would impose something better on ourselves after years of armed conflict than we are imposing on ourselves now? Do revolutions or civil wars (and revolutions really are civil wars) make us calmer, wiser, more compassionate people?

And is it worth the cost? Such wars are incredibly bloody affairs. I think that few revolutionaries truly count the ‘transaction cost’ of trading one regime for another. The genuinely evil ones don’t even try to. We did this twice in our history. First the colonies dissolved their relationship with the Crown. This was a eucatastrophe ending much better for the human race than anyone really had a right to expect.

The second revolt was a deformed grandchild of the first in which the southern states hid behind the language of freedom in order to avoid taxes which were constitutionally imposed, preserve the institution of chattel slavery, and make way for dreams of a Southern Continental empire. The exercise ended badly for the instigators and was awesomely painful even for the victors. Does anyone seriously believe that we are a people more ready to rebuild than that generation? Do you see any leader on the horizon more able to bind up the wounds of the nation than Lincoln?

The founders believed that what happened here was some sort of historical miracle and it’s easy to understand why. The preconditions for success were uniquely strong. Revolutions usually don’t succeed because they destroy the society in which they occur; tearing down the old social order and forcing a new one to revolve up into its place (hence the word ‘revolution’). That why it almost never works.

When Mel Brookes has Count Demoney telling the king that “the peasants are revolting”, the king looks at them and agrees. Classical literary references aside, Brookes is right. The revolutions are ugly and the results are even uglier.

But here, we did not have a revolution, most of the founders studiously avoided the use of that word. We had a war for independence in which local units of government dissolved their ties with a distant tyrant. We didn’t have to tear our country apart, just tear it apart from Great Britain. Ours was not a rising up of the downtrodden or the debtor class as so many of the ancient Greek and Roman revolutions had been. It was not a fight of the bottom against those above them. It was a fight of the middle, which had been functioning as the de facto governing class of the nation for generations before.

It wasn’t a rabble revolution. Deriders in England called it things like the ‘shopkeepers revolt’ and the Presbyterian rebellion. It came from a law abiding class of people who put their arguments in terms of ‘the ancient rights of Englishman’, not the revolutionary utopian terms like, for example, the instigators of the peasants revolt in Martin Luther’s Germany.

The amazing success of our effort has inspired many a delusional imitator who believed that all you had to do was kill a king to achieve heaven on earth. Almost none of them have succeeded.

Left-wing dreams of people’s revolutions were at best delusional, and given the results of France in 1789 and Russia in 1917, such dreams are no longer bemusingly foolish; they are evil. But conservative ‘exodus’ and secession dreams seem only a little better. After all, we’re supposed to know better. We’re the ideology which is in touch with reality.