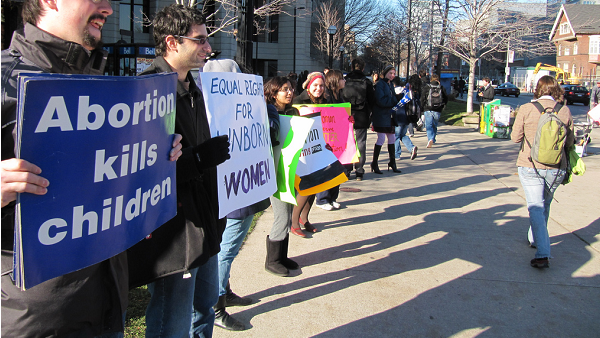 Pro-abortion ideology does funny things to people’s heads–even smart people like Will Saletan of Slate (who I’m pretty sure is the smartest liberal commentator around). Here’s an example of what I’m talking about:

“I can’t get past the feeling that pregnancy is one person growing inside another and that every part of that conundrum—one person, growing, another person—has to be taken into account. And I’m a sucker for context. So I cling to the mushy, unprincipled belief that… while there ought to be fewer abortion decisions—and there would be, if pro-lifers would magically redirect their energy from abortion bans to birth control—when those decisions arise, they’re best made by the people directly involved.”

OK. Brother Saletan gets the first point right. The unborn child is a person–the son or daughter of the mother inside whom he or she is growing. No dissembling, no prevaricating, no obfuscating on Saletan’s part. He tells it like it is. Good. Refreshing. Bravo.

It’s what comes next, though, that shows you what a deep commitment to pro-abortion ideology does even to good minds like Saletan’s. He tells us that “When [abortion] decisions arise, they are best made by the people directly involved.”

He’s already acknowledged that there are two people involved. The mother and the baby. So how’s the baby supposed to be “involved” in a decision about whether his or her mother should take a drug or engage the services of an abortionist to kill him or her?

And, by the way, these “abortion decisions,” how do they “arise”? Presumably, we’re talking here about the overwhelming majority of cases in which the existence of the child poses no grave threat to the life or health of the mother. We’re talking about “elective” or what used to be called “social indication” abortions. Why should these be matters of “a decision” any more than infanticide (now relabeled “after-birth abortion,” by the way) is a matter of “a decision.”

If, as Saletan rightly acknowledges, you’ve got a person—a precious member of the human family equal in worth and dignity to every other—then whether to target him or her for death because his existence is a personal or social problem should not be “a decision.” It should be something we do not do or permit to be done. We should love, cherish, support, and assist both persons involved, when, as Saletan says, a person is growing within a person.”