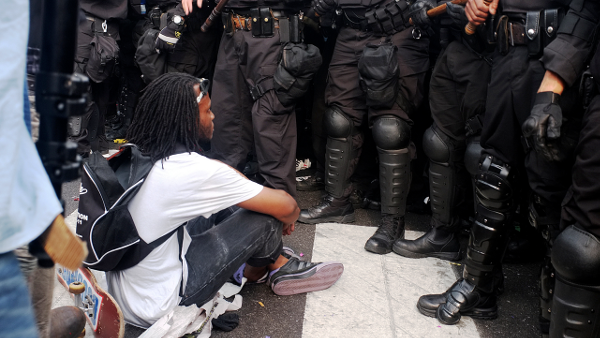 Why am I singing? To relieve my broken heart. Why should I spin yarn if in the end the yarn will be cut? Why should I remember if remembering only breaks my heart?

Joshua Oppenheimer’s 2014 documentary masterpiece The Look of Silence opens with these lyrics sung by an elderly Indonesian man who partook in the 1965 Indonesian massacres that claimed over one million victims. The doting grandfather nonchalantly recalls of one particular victim, “I ripped him open. His intestines spilled out… I threw him, his head hit a rock.”

When asked by Adi, the brother of one of the massacre’s victims if his neighbors fear him, another retired killer declare:

“They know they’re powerless against me. Because I’m part of a mass movement… If we didn’t drink human blood, we’d go crazy… Some killed so many people, they went crazy. One man climbed a palm tree each morning to do the call to prayer. He killed too many people. There’s only one way to avoid it, drink your victims’ blood, or go crazy. But if you drink blood, you can do anything!”

Later another local leader, M.Y. Basrun, speaker of his regional legislature since 1971, says the killings “were the spontaneous will of the people,” despite the fact that the army and police escorted the victims from prison to be killed at the river. “I’m setting the record straight…” “But a million people were killed,” Adi interjects. “That’s politics,” the speaker retorts. “Politics is the process of achieving one’s ideals. In various ways.”

Culture begins with the sharing of a meal and the telling of stories. We can imagine this primordially occurring around a campfire as humans shared symbols to make sense of who we are. The late anthropologist Rene Girard defined culture as “Remembrance.” He suggests modern language gives hints at the origins of culture. Indeed, he says, archaic “remembrance” is the remembering of a common sacrificial victim’s body back together. Religions, or cultural bindings, universally provided controlled acts of sacrificial violence of victims in order to “re-member back together” the original victims upon which their society rests. Wars, scapegoat lynchings, social purging, all come from this remembrance.

Archaeological evidence suggests ritual human dismemberment and cannibalism was an essential worldwide phenomenon of ubiquitous prehistoric and ancient pagan religions. Humans did this because as Rene Girard has shown, “The essence of desire is to have no essential goal. Truly to desire, we must have recourse to people about us; we have to desire their desires.” We desire our neighbor’s possessions or status so much because we desire to be our neighbor. We envy them. They envy us in return. This reciprocal imitation, Girard calls it mimetic desire, leads to the greatest acts of beauty in humanity, as well as its worst cycles of envious vengeance: we eat each other.

We can see this mimetic trait in a surface form in the schoolyard game of copycatting. A person feels a maddening loss of self the more he or she experiences their every word being copied. This loss of self is what the Indonesian killers experienced to a much greater degree during their ecstatic frenzy of mimetic collective violence against their victims. The only “cure” many of them discovered was to “complete” the sacrifice: to drink the blood of their victims. To consume their strength. To consume their death as a kind of antivenin for their own death anxiety. Far from being a barbaric fluke, the Indonesian commandos were unknowingly performing a ritual at the core of what it means to be human.

Tribal cannibalism lapsed at varying rates as civilization evolved but the sacrificial violence behind it remained. For instance, why is it that in 1305, England placed the members of William Wallace’s torn body at different national boundaries? Remembrance.

Even in modern times we see grotesque flashes revealing our deeper need to consume our victims’ being. After killing John Lennon, Mark David Chapman remarked, “I thought that by killing him I would acquire his fame.” Armin Meiwes, a German who cannibalized another man told the Daily Mail, “The first bite was, of course, very strange. It was a feeling I can’t really describe. I’d spent over 40 years longing for it, dreaming about it. And now I was getting the feeling that I was actually achieving this perfect inner connection through his flesh.” Meiwes graphically reveals the raw essential cultural revelation behind cannibalism: the desire to be our neighbor consumes us to the point that we consume them.

Today, statist cultures demand that we feed them constantly with the shed blood of victims. Modern states are not some alien Other forced onto hapless individuals but rather the symptomatic vestiges of archaic sacrificial cults, our older form of keeping our wits together by controlled sacrifice and expulsion of common victims. Through the state, we feed our collective body by consuming those who defy our will: drug users, prostitutes, greedy tax objectors, misfit violators of regulations. (We have an estimated 300,000 plus federal regulatory crimes alone.) And our ultimate sacrifices, our war heroes, continue to be victimized in useless wars by a state culture that needs shed blood to feel the sacred ecstasy of transcendence. You know, like the goosebumps at the opening ceremonies of football games.

The more we unconsciously mirror each others desires, the more we experience a maddening loss of self. This makes us collectively devour misfits—from the rich old guy for the left to the dirty street dealer for the right—to consume their perceived other-ness. They are consumed in the belly of our penitentiary system. Vanquished from the real world. Only to be excreted in an oppressed non-full citizen no-man’s land if they make it out, stripped from the sacred voting rite and gainful employment.

And lest we scapegoat the state, we must realize that its violent scapegoat rituals we partake in through voting and juries is a reflection of the way we consume each other in our culture, not necessarily in physical violence but social and emotional violence.

We consume each other when we use our liberty of commerce to compete for the sake of competing. We do it at the office when we exclude, gossip, and isolate the one that doesn’t fit in with the clique. We do it when we demonize Trump or Clinton as a means of finding a common demon to destroy with our neighbors. Just why is it that it feels so good for two rivals, or “frenemies,” to scandalize and mock a third party, present or not? Perhaps we quickly tabooed cannibalism precisely because it reminds us of an inner reality all too close to home we’d rather not recognize.

Culture begins with shared meals and stories. One story we tell that scandalizes us all is that of Jesus. In the eyewitness accounts of his life it says before he was devoured by his community that, “He broke bread, gave thanks, and said, ‘This is my body. Take eat. Do this in remembrance of me.’” Jesus is retelling the history of human civilization, this time from the vantage point of our victims.

On trial, Jesus does not demand honor as Dionysus does in the court of King Pentheus. And also unlike Dionysus, he does not invite his followers to imitate his own devouring through violent reenactments. Instead, the ritual meal he inaugurates in history is one that is called thanks, Eucharist literally means “thanksgiving.” Dionysus, a god of our own making, a mythic cover up for sacrificial consumption of an other, reflects our own base envy for power. Jesus reveals it thereby dismantling it.

All the kings of history including our modern states demand, “Feed me.” We consecrate these hungry models out of a need for what the Apostle Paul called the pagan sacrifices of his day: “baby food.” We are slow to grow up like Jesus and self-sacrifice rather than consume our neighbor.

Feed me with the sacrifice of misfits, the strong, the weak, the soldier, the ghetto mom, the rich white man, the migrant tomato picker, the office “weirdo,” any member of society whose Other-ness looks like food to a crowd blob locked in reciprocal copying to the point of madness. Jesus says, “Eat my body. Drink my blood.” Remember the origins of human culture, founded on the need to devour victims. Reject the dying false transcendence of the Big Others we create—politicians, agendas, ideologies, any narratives that justify the consuming of little others, those whose arbitrary distinctions trigger our collective envious hunger.

Ludwig Feurbach said, “Man is what he eats.” Eat violence or eat the refusal of violence. Jesus invites everyone to deconstruct and confront our cannibalistic social origins and then re-create culture in a way in which the state and the consuming culture of envy that manifest it simply wither away over time like a bad old habit we used to do.

It starts with a meal. In sharing Jesus’s meal, we do not shed blood. We renounce all violence. We do not envy a Great Man who demands submission, but instead, imitate his own forgiveness and self-emptying love for others, even the ones who shame us.

“The commandment to imitate Jesus does not appear suddenly in a world exempt from imitation; rather it is addressed to everyone that mimetic rivalry has affected. Non-Christians imagine that to be converted they must renounce an autonomy that all people possess naturally, a freedom and independence that Jesus would like to take away from them. In reality, once we imitate Jesus, we discover that our aspiration to autonomy has always made us bow down before individuals who may not be worse than we are but who are nonetheless bad models because we cannot imitate them without falling with them into the trap of rivalries in which we are ensnarled more and more.”

Let’s toast to that.