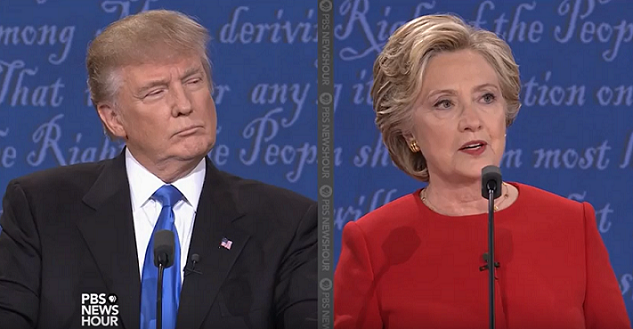 Unless you’re a hardcore Trumpie, you probably thought that Clinton won the debate. Sure, Trump did a little better in the earlier trade discussion, but Clinton did much better later on and has had far more favorable coverage today. Online flash polls had Trump ahead last night, but focus groups and the media have given the win to Clinton.

But here is a sobering point to free-market supply siders like myself. The part of the debate that Trump ‘won’ was the part about the issue he’s most wrong about. Larry Kudlow and Steve Moore and other supply siders have staked a lot on Trump’s supply side platform. But they wrote it, not him, and he reads what they write. He has almost no core passion about domestic tax cuts and deregulation.

He can put her on the defensive about trade so well because that’s the part of his platform which he actually believes in! The rest is optional. He comes alive when he talks about how bad NAFTA is. His economic policy team, which he chose, has more protectionists than it does supply siders.

Supply siders should not stake the credibility of their ideas on such a bruised reed. If principled conservatives have to hold their noses and vote for Trump because she’s so much worse, fine, but then don’t pretend everything smells like roses. Be honest in advance with yourselves and with others about the fact that this is a compromise under a situation of bad choice vs. worse choice.

If I’m going to be an honest analyst, I can’t out of partisan loyalty ignore the risk which this presents: trade wars are incredibly economically destructive. They’re popular at the beginning, but they’re deadly to growth. And if he wins and starts one and causes a severe contraction, then free market thought will be blamed, just as it was in 1932 when Hoover’s protectionist-caused depression was blamed on capitalism by FDR.