Want to See Miracles? Look at the Marketplace 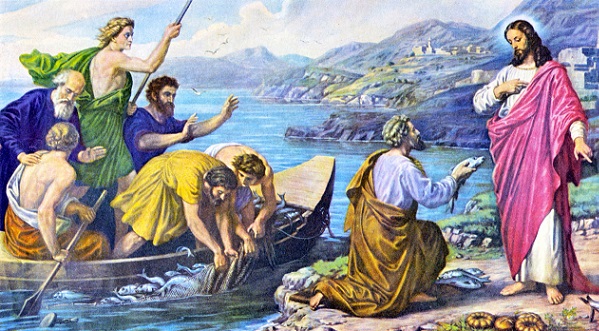 Miracle of Fishes (Photo from Waiting For the Word) (CC BY-2.0) (ResizedCropped)

When Christians think about work, they often get stuck on a theological see-saw.

At times, church work is valued most. Other times, office work is raised up in importance.

These priorities bob up and down in most Christians’ minds, particularly young people, as we figure out where the Lord wants us to serve. It’s not clear how to value the parts of life that happen outside a church and in places where Christ is not named.

Since the time of Martin Luther, who correctly declared that the work of ministers and merchants (and mothers, too) was all equally good and godly, nearly every individual Christian has struggled to actually keep this see-saw level. Our secularized culture now prizes work outside the church far, far more than work inside it. This can lead Christians either to devalue church activities or, conversely, to identify overt acts of ministry as the only truly “Christian” work.

I have a proposal, not merely to level out this see-saw, but to lift us off it entirely.

It is not enough merely to say that Christians’ daily toil, whether it is sacred or secular, is good and important. To get off this see-saw, we must come to believe that our work is, in fact, miraculous.

Yes, you read that right: Our work—all work—is nothing less than a miracle.

Work in the church. Work in the office. Work by Christians. Even work by non-Christians. It is all, fundamentally, the miraculous work of Christ.

No doubt, at this point, you are growing doubtful. A miracle, many of us think, is doing the impossible—going against the laws of nature. It is so rare that if we saw it, we would stop, stare, pinch ourselves and gape in wonder. That’s how the people of Jesus’ day reacted to His miracles.

Let’s take a look at a popular definition of miracle.[i] The Merriam-Webster Dictionary defines “miracle” like this: “an unusual or wonderful event that is believed to be caused by the power of God” or “an extraordinary event manifesting divine intervention in human affairs.”

For most of us, work appears to be the opposite of that description: repetitive, common, monotonous. Something that makes us feel weary, not wonder. Or, even when our work is interesting and exciting, it bears no resemblance to divine intervention. It is material through and through—the antithesis of anything spiritual.

Or so it seems.

But if we truly understand Christ’s redeeming work as king over all creation, we will see that He is intervening in human affairs each time you serve a customer, cook a meal, dress your kids, help your neighbor.

Christ’s lordship is so extensive that He is, on a daily basis, continuing to work His miracles in the world through our common, mundane tasks. In fact, Christ is, in a very real sense, doing the same miracles He performed on earth, but now He does so using the everyday work of men and women.

I found the first strand of this idea while reading C.S. Lewis, who wrote an essay and a book titled Miracles. Each of Jesus’ miracles, Lewis said, was a short-circuiting of a natural process. During his earthly ministry Jesus did instantly things that God is doing constantly over time.[ii]

“There is an activity of God displayed throughout creation, a wholesale activity let us say which men refuse to recognize. The miracles done by God incarnate, living as a man in Palestine, perform the very same things as this wholesale activity, but at a different speed and on a smaller scale,” Lewis wrote. “The miracles in fact are a retelling in small letters of the very same story which is written across the whole world in letters too large for some of us to see.”[iii]

This idea isn’t something Lewis invented. He borrowed it from the early church father Athanasius—the man responsible, more than any other, for the doctrine that Jesus is both fully God and fully man.

In his great book On the Incarnation, Athanasius asserted that the miracles Christ performed on earth proved that He was also Lord of all of creation.

“Again, consider the miracle at Cana,” Athanasius wrote. “Would not anyone who saw the substance of water transmuted into wine understand that He Who did it was the Lord and Maker of the water that He changed? It was for the same reason that He walked on the sea as on dry land—to prove to the onlookers that He had mastery over all. And the feeding of the multitude, when He made little into much, so that from five loaves five thousand mouths were filled—did not that prove Him none other than the very Lord Whose Mind is over all?”[iv]

My proposal is merely to add a vocational lens to this view of miracles. Here are a few examples of what I mean:

Reformed theology has argued that the gift of miracles stopped once the revelation of the New Testament was complete, because the function of miracles was to prove the authority and veracity of the messengers of God’s word.

Jesus’ work as a king did not end with His death and resurrection. It continues on and on. Jesus still proves His lordship by doing miraculous things. And those miraculous things include the everyday work of men and women.

Christ performs these miracles of growing food, bearing children, delivering medicine, and others so consistently that we call them “natural processes.” Their frequency makes us think that they are not really miracles—because miracles are “unusual events.”

But these acts are, indeed, unusual. They should not be happening. Mankind’s sin is so destructive that we should expect to find only selfishness on earth—not fathers loving their kids, or businesses serving their customers, or doctors healing patients. We should see only vice and violence.

It’s actually a miracle that the world continues on at all.

The real question is why God, after Adam and Eve sinned, didn’t simply destroy His creation. After all, He is a holy God who cannot be in the presence of sin. And He is a good God, who had given Adam and Eve every advantage not to sin—a garden without weeds, food without labor, close fellowship with Him and with each other—yet still they rebelled against God.

Mankind’s sin became so extensive that, as Genesis 6:5 says, “every intent of the thoughts of his heart was only evil continually.” So after God destroyed nearly all living things with the flood, why did He then promise to keep human society going (see Genesis 8:22)?

The answer, according to such theologians as William Symington and Abraham Kuyper, is to allow for the salvation of His chosen ones. God, through the work of Christ, upholds the world so Christ can build His church.

Symington, a 19th Century Scottish pastor, worked out one of the most complete theologies of Christ’s lordship in his book, Messiah the Prince. Central to his theology of lordship is Ephesians 1:22, which states that God “put all things under [Christ’s] feet, and gave Him to be head over all things to the church.”

“Whatever power the Mediator possesses is for the good of the church; is given and exercised for this purpose,” Symington wrote. “But what, we ask, is there that is not for the good of the church? But for the church would the sun continue to shine, the rain to fall, the earth to vegetate? Would the wheels of providence continue to revolve, or the pillars of the universe to be upheld? No. The church is the great conservative element of the world and all that is in it; nor is there any thing which is not capable of being rendered, by infinite wisdom and power, subservient to the interests of God’s covenant society.”[v]

Glory in your work

What does this mean for your daily work? It means that Christ is using your work, wherever you labor, to uphold the world and to build His church.

Just think about that for a moment. Even if you have a boring, mundane, ordinary job, Christ is using it to keep the world going, so He can also bring more and more people to saving faith through the work of His church.

That is stunning. That is miraculous.

If only we have the faith to see it.

If we do, we can step off the theological see-saw about work. With eyes to see Christ working through us, we can know for certain that we serve God both through church ministry and through weekly wage-earning. We declare Christ “Lord of all” both when we sing hymns on Sunday morning and when we remember, on Monday morning, that we are part of Jesus’ work to feed the hungry, or heal the sick, or bring delight to the weary.

This is how Christ keeps the world going.

So let us glory in our work, wherever we labor. For when we know Jesus, we know that what is mundane, what is monotonous, what is money-focused, is actually miraculous.

J.K. Wall is a writer and former business journalist in Indianapolis. His modernized abridgment of William Symington’s work, Messiah the Prince Revisited, was published in 2014 by Crown & Covenant Publications. This post first appeared on the Gentle Reformation blog.

[ii] Many theologians describe miracles as events that are “against nature,” which would seem counter to Lewis’ view. However, using “against nature” as shorthand leaves out a nuance that exists in most systematic theologies, which declare that while some of God’s miracles are contrary to the laws of nature, not all are. Or, at least, they are not contrary to nature in all respects. For instance, manna falling from heaven was contrary to the laws of nature. But hail falling on the Egyptians, while miraculous in its scope and specificity, was not unnatural. The Westminster Confession of Faith says, “God, in his ordinary providence, maketh use of means, yet is free to work without, above, and against them, at his pleasure.” So miracles “against nature” are one of God’s options for miraculous work, but not His only option.