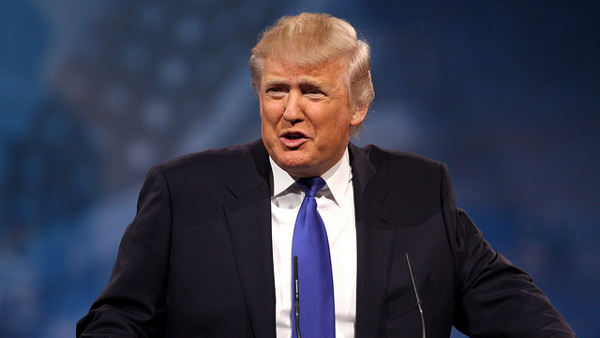 The mainstream media is trying to play this off as Clinton’s convention surge, which started over a month ago, tapering off. This is quite obviously nonsense. Convention surges are brief swings of 3-4% in polling for usually one-to-two weeks. If you’re still ahead by 5% or more two weeks after the convention, when several other stories have taken up people’s attention, ascribing success in the polls to a convention bump is absurd.

And that’s what many Republicans did in early August when it was looking like Clinton was going to win in a landslide. That was wishful thinking at best. Trump was losing badly in the polls and betting markets because he was performing badly as a candidate.

By the same token, liberals and Democrats – either declared or non-declared, like those at CNN – are being ridiculous when they explain away Clinton’s precipitous fall as the effect of some heretofore unheard of month-and-a-half convention bounce. Clinton is dropping because she’s actually, at her core, a very bad candidate. She’s uncharismatic, she comes across as overly-scripted and robotic; not to mention her near-constant scandals. Her weakness as a candidate and campaigner was masked by Trump’s inability to stop himself from getting into irrelevant Twitter fights with Gold Star Families. And Trump’s doing better today because he’s learned to be a better candidate. And he’s done it in relatively short order, I might add.

His efforts to not lose by 10% have been rewarded as of late in the betting markets. This chart shows Clinton and Trump’s probabilities of being elected President, since July 15th, just before the Republican Convention. Trump did indeed get a convention bounce. You might remember him briefly tying and even leading Clinton in some national polls as late as August 1st. But then Clinton’s convention bounce kicked in, and Trump repeatedly put his foot in his mouth, most notably in the debacle with the Khan family. You can see on the chart Trump fall and Clinton rise around August 3rd. 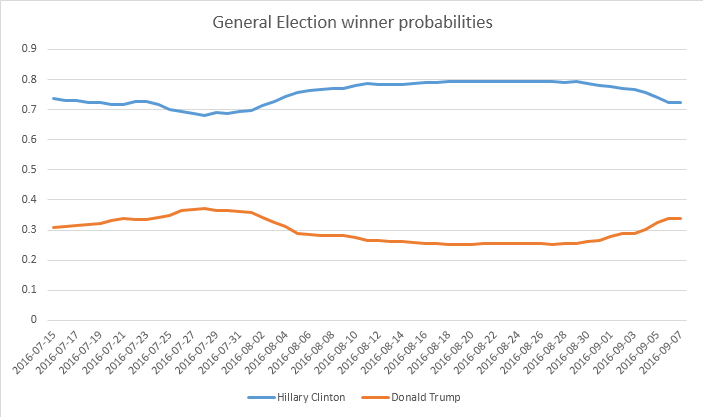 After several weeks of horrible poll numbers fueled by seemingly endless controversy, Trump realized he needed to change the narrative. So on August 17th, he hired new campaign staff, fired Manafort, and apologized for comments in debates that may have caused “personal pain.”
These changes, combined with Clinton’s constant unwillingness to answer questions honestly about her email server, slightly reversed Trump’s seemingly unstoppable decline.

But there are two things in the past week that have significantly shifted the betting markets. The first of which was Trump’s successful trip to Mexico, and his immigration “softening.” Which was a softening, despite what you may have heard. If you actually read the text of the speech, what Trump put forward was basically Marco Rubio’s immigration plan, just with harder rhetoric. Rubio’s plan during the primary was essentially this: Deport illegal immigrants when we find them, prioritize those who have committed crimes while in the country, and secure the border. Once the border is totally secure, then we can have a conversation about legalization for those non-violent illegal immigrants who are still in the country.

That’s Trump’s plan as well. The difference is Trump laid out this policy in a loud, enthusiastic, combative speech. He doubled down on his tough immigration rhetoric, but he did as a matter of fact, not matter what Ann Coulter says, soften his immigration policy. The mainstream media insists that this was a re-commitment to his hard-line stance on immigration from the primaries, but it seems that most people who actually watched or read the speech realized that it wasn’t, and the speech broadly speaking has been well received.

Combine that with the news about Clinton having her Blackberries smashed with hammers, claiming she didn’t know that “C” stood for “Confidential” in her emails, and all the other ridiculous things that came out of the FBI’s recent report, and you can see why Trump’s gotten a 7% probability swing in less than a week.

Now, I don’t want to overstate Trump’s success. He still only has about a 34% chance of winning, according to the markets. In polling, Clinton is still up by 3.3%. But he’s made a big change in a short period of time, and the mistake so many in the world of political punditry have made is underestimating just how weak a candidate Clinton is.

I still don’t think Trump will win, but if you think that Clinton will be able to just waltz her way to victory, you’re just not paying attention.