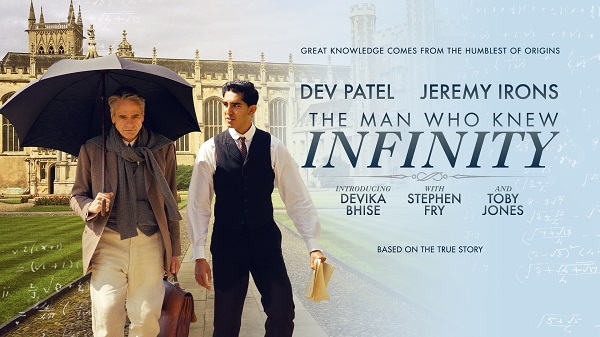 “The Man Who Knew Infinity” (2015) is a film about the clash between Augustinian view of mathematics and its secularized, atheistic corruption that ruled Trinity College, Cambridge, before and during WW1. The conflict becomes interesting because Augustin’s Christian view is articulated by a goddess worshipping, Hindu Mathematical genius, Srinivasa Ramanujan (1887 – 1920), wonderfully played by Dev Patel. Secularized atheist mathematics is presented by Ramanujan’s maverick mentor, G. H. Hardy (1877 – 1947), performed by Jeremy Irons. The actors breathe life into an abstract and potentially boring subject.

Present throughout the movie, as Hardy’s friend and colleague, is Britain’s celebrated atheist, Bertrand Russell. He “completed” the secularization of Europe’s Christian mathematics, begun by Descartes.

Film’s director, Matthew Brown, wrote the screenplay based on Robert Kanigel’s Book: The Man Who Knew Infinity: A Life of the Genius Ramanujan (Washington Square Press,1991).

Hardy is remembered for his 1940 essay on the aesthetics of mathematics in, A Mathematician’s Apology. Yet, the film opens with Russell’s quote, ”Mathematics, rightly viewed, possesses not only truth but supreme beauty…” Ironically, one of the film’s subtle points is that true truth and beauty are philosophical ideas that make no sense in a God-less universe.

Ramanujan had no college degrees and hardly any formal training in Mathematics. He landed up in Isaac Newton’s college on the strength of the mathematics he had done in his note books. On his own, he had solved problems that were puzzling Cambridge professors. He had re-invented formulas that no body told him already existed.

The clash of world-views came because Ramanujan “saw” or “received” complex mathematical formulas “intuitively,” just as entire symphonies came to Mozart. Hardy’s Cambridge, wedded to logic, could not deny the reality of “intuition.” Yet, for their atheism all “truth” had to be a social construct, invented by humans. Nothing could be called “true,” unless it was derived from logic and proven logically.

Ramanujan did not go to Cambridge to earn a degree. He went there to get his theorems published in peer-reviewed mathematical journals. Hardy had a hard time explaining that if he published Ramanujan’s theorems of Prime Numbers in their present (intuitive) state, “I’ll be sent to the lunatic asylum.”

In order to help Ramanujan understand what he needed to do to be published in academic journals, Hardy generated logically acceptable “proofs” for some of his intuitive theorems. That got the London Mathematical Society to publish, “Highly Composite Numbers: Mr. S. Ramanujan.”

Besides mathematical methodology, Hardy had other problems with Ramanujan. One of his closest mathematical collaborators in Cambridge was Mr. Littlewood, a believer in Christian God and an admirer of Ramanujan. He went over Ramanujan’s formulas meticulously and summarized that, (1) “Ramanujan work on primes [numbers] while brilliant in itself, is actually wrong.” (2) … And yet, Hardy had in his protégé Ramanujan, “nothing short of a miracle. The man exceeds any notion of brilliance that I have ever understood. Forget Jacobi, we can compare him to Newton.”

Cambridge’s atheistic philosophy of mathematics could not comprehend Ramanujan. Hardy is forced to ask him, “How does all this [math] come to you?

At first Ramanujan answers, “I don’t know.” Sometime later, after he assumes that Hardy has become his “true” friend, Ramanujan confides how he gets his mathematical ideas. The film-script says, “My god, Namagiri. She speaks to me. Puts formulas on my lips when I sleep. Sometimes when I pray.”

In his June 1920 obituary to Ramanujan, Hardy recalled Ramanujam telling him
“While asleep, I had an unusual experience. There was a red screen formed by flowing blood, as it were. I was observing it. Suddenly a hand began to write on the screen. I became all attention. That hand wrote a number of elliptic integrals. They stuck to my mind. As soon as I woke up, I committed them to writing.”

The possibility of divine revelation is completely unacceptable to Cambridge atheists. Therefore, in the film, Ramanujan asks Hardy, “Do you believe me? You would believe me if you are my real friend.” (For I don’t confide such intimate, private truths to non-friends).

Ramanujan goes on to make a classical Augustinian statement, “You see, an equation has no meaning to me unless it expresses a thought of God.”

Why did Ramanujan go to Cambridge? Why couldn’t he go to a Hindu Ashram and get a scholar to examine his mathematics and get it published? Well, it is because although an Indian invented the mathematical concept of “zero,” Hindu-Buddhist philosophies did not support Mathematics. In contrast to Hindu Ashrams and today’s secularization of academy, Oxford and Cambridge began as Augustinian monasteries. St. Augustine wrote a great deal on mathematics. It was Augustine’s biblical worldview that produced Astronomer Johannes Kepler. Kepler summarized Augustine’s theology (quoted by Ramanujan) when he described his groundbreaking theories as,

“I was merely thinking God’s thoughts after him. Since we astronomers are priests of the highest God in regard to the book of nature, it benefits us to be thoughtful, not of the glory of our minds, but rather, above all else, of the glory of God.”

Those who really want to understand the clash of world-views depicted in “The Man who Knew Infinity” should read the works of James Bradley of the Dept. of Mathematics and Statistics in Calvin College, USA. His papers are on the internet. Bradley explains how St. Augustine’s theology nurtured European Mathematics for 1500 years; how Europe secularized it between 1850-1950; the intellectual problems that secularization created; why these problems brought Enlightenment’s modernism to an end; and how the Bible’s worldview can yet help postmodern academy recover sanity.

Ramanujan’s math continues to be useful, including in helping scientists make some sense of how black holes might work. However, Ramanujan’s historic significance lies in the fact that he exposed atheism as incapable of making sense of numbers in cosmos and their correlation with mathematics in the human mind. He forced secularists to go beyond logic to consider inspiration, intuition, and direct revelation from supernatural realms.