Ron Paul: Still the Only Christian Choice for President 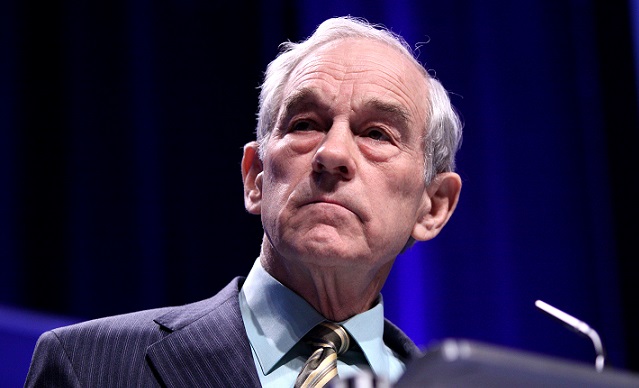 Ron Paul is the only major presidential candidate Christians could hire without sinning against Jesus in my lifetime.

What I mean by “sin” is doing that which is against the imitation of Jesus. The word Christian means “Jesus imitator” or “follower.” If one hears what Jesus requires of his followers and does the opposite, that is sin or, in the Greek, “missing the mark” of Jesus’s model.

When I speak of Ron Paul, I am not referring to his character here, but rather his stated platform for what he would do if hired to be the president of the United States. Ron Paul demonstrates excellent character in being married to one woman for 59 years and being the father of five children who demonstrate imitation of their father’s love for liberty and medical practice. But I cannot truly speak for the character of candidates who have sought the presidency in my lifetime. I can only judge the ethics of their stated platform of what they would do if elected president. Every one of them fails to hit the mark of faithful imitation of Jesus except Ron Paul.

This is very simple to see. Christians don’t get to turn off their moral requirements in bearing the name “imitator of Jesus” at the ballot booth. You aren’t imitating Jesus if you do the opposite of what he did. For example, in Matthew 5:39, Jesus says, “But I say to you, Do not resist one who is evil. But if any one strikes you on the right cheek, turn to him the other also.” Theologian Walter Wink reminds us the word “resist” is used for the Greek word antistenai which means “to resist violently, to revolt or rebel with violence.”

In Jesus’s context he is telling the Jewish people experiencing violent oppression to not repay their elites’ abusive evil with violence. If this command applies to the evil of dominant powers how much more so does it apply to the evil perpetrated by our fellow citizens? What part of “do not violently resist evil” are we missing?

You think it’s sinful and gross that your neighbor does drugs? Got it. Jesus says, “Do not resist evil with violence.” That means, don’t use deadly force to get them to stop: it will only create more violence, drug abuse, and social disintegration.

Jesus is teaching us a structuring principle of society. And yet we disobey it, for what? The Public Good? The Will of the People? Hope and Change? American Exceptionalism? How’s that working out for us?

You’re incensed that your neighbor down the street is sinfully underpaying his workers? Great, me too. Jesus says, “Do not resist evil with violence.” That means you can’t hire politicians that will keep laws in place that send armed agents to use lethal force to cage said neighbor. Which means if a presidential candidate wants to keep minimum wage laws in place, and you hire them with your vote, you are sinning—missing the mark—of the imitation of Jesus. And it wasn’t even hard to do. It’s not like you had to face down brutal Roman soldiers or coliseum lions. You just had to not be foolish in thinking it’s ever the Jesus way to send armed agents to force the “selfishness” out of your neighbor.

Scared of seeing factory new Toyota truck driving, US-armed ISIS fighters with beautiful Hollywood-level production budgets assaulting…. Wait do I even have to explain this? Don’t hire a presidential candidate that leaves one dollar or troop in the hands of foreign countries that have no way of hurting us accept with the weapons and occupation-fueled recruitment tools our government gives them. How is this even a thing we have to explain to grown adults? Especially Christians whose namesake demands, “Do not resist evil with violence.”

But what about greedy healthcare companies that don’t insure fairly, you say? Such evil exists because of government rigged-ulations that create captured, corporatist markets. But do not resist their evil with more state violence, lest you create even more healthcare destruction and misery.

Again, most of us don’t even have a gun to our head or a lion at our throat, and we can’t even handle obeying Jesus on his central social structuring command. We have no skin in the game and yet we’re like, “Meh, I think Paul Ryan’s got some great ideas.” Mercy, Jesus.

Ron Paul’s stated platform was the only presidential platform you could vote to implement that would not actively make you disobedient of Jesus. Ron Paul said as president he would pardon all nonviolent offenders from all nonviolent actions: that includes the drug user, the raw milk seller, the alternative medicine promoter, the honest alternative money creator, the conscientious objector. He said he’d bring the troops home from all acts of occupation and unprovoked aggression. With screaming crowds waiting for orders, Ron Paul—like any Christian serious about Jesus would say—that shock of all shocks—he “didn’t know how to run the world, didn’t know how to run the lives” of the 300 million people in the US.

Can you believe that? From 2007-2012 AD, a follower of Jesus told crowds that he didn’t know how to or have any interest in running 300 million peoples’ lives! Jesus said, “The first shall be last, and the last first.” Wouldn’t that look like a president who tells the voting mob of millions not to trust him to plan out their lives? Wouldn’t that look like a man asking a nation’s permission to set its collective scapegoats—its millions of poor, rich, young, old, black, white, and brown captives—free? Free from the dark belly of a predatory, criminally unjust system that shoves nonviolent defenseless misfits into cages with actual violent antisocial psychopaths.

Wouldn’t “do not resist evil with violence” look like striking a blow to the global state-corporate power structure through the nonviolent creative destruction of nullifying all laws that hinder the working out of the salvation of 300 million unique persons—each with their own flaws, family histories, and sins incapable of being healed by the satanic physical abuse of legislated anti-laws that destroy families, intensify resentment, and multiply violence as Jesus predicted?

Can somebody say Amen? Or have we lost our damned minds? Have we thrown down our crosses before we even tested their weight? Have we thrown our stone at the adulterous woman safe in the anonymity of the crowd because, God forbid, we need to violently subdue her sins lest adultery run rampant? Adultery is much more socially destructive than dope, you know.

Have we stood in rapturous applause as Caiaphas proclaimed, “it is better that one man die than the whole nation perish,” as we dismember and murder thousands of innocent human lives across the globe in drone strikes and village raids and bloody coups because we fear death so much we’ll gladly shoot anything that moves if it looks different from us? Jesus declared Shalom—Peace with You—right after defeating death. Have we even tried to imitate his courage in letting go of such violent death anxiety? It doesn’t cost us anything but our media-stoked fears.

I’m glad this year millions of American Christians are finally starting to second-guess their obligation to pick a flavor of anti-Christ violence for the state to carry out on their behalf. I’m just sad it took a candidate’s petty vice of cussing and vulgarity to wake some of them up. I wish they woke up before they hired people like Clinton, Bush, and Obama to ascend a throne of bigoted cowardice built on the millions of people cast into the darkness of rape cages for the same nonviolent vices they themselves enjoyed. Whether it’s rebellion, greed, addiction, or self-medication, haven’t we all done what we accuse of our scapegoats?

To such blind lovers of Christ-less Christianity, does the Jesus you’ve made up in your mind and in your likeness say, “Do not resist drug use with violence as long as the drug users have lots of worldly power like Clinton or Bush”? What possessed you to devise a false Jesus that says it’s okay to hire drug using presidents to lock up drug-using neighbors with deadly force we ourselves would vomit in carrying out on our own?

Thank you, Ron Paul, for showing a nation of anti-Jesus Christians how it’s done. Thanks for showing millions of Christians, as Nina Simone once sang, “how it would be… to be free!” Free from violent envy of our neighbors’ possessions and status. Free from neverending lust for power over rivals. Free from the evil of resisting evil with violence. Free from the soul-rending cycle of strife and lies and brutality such state violence creates. Free from the fear of death.

In a nation where 70% claim to be Christians, may we have the courage to love our neighbors as ourselves. To not repay evil with violence. To follow Jesus.