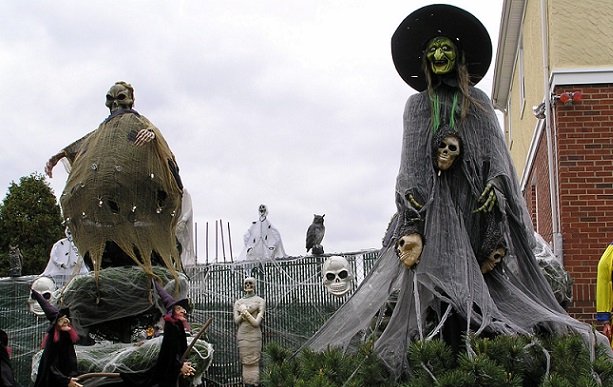 Yesterday, of course, was Halloween. It was also Reformation Day—a day many Protestants would consider is commemoration “of perhaps the greatest move of God’s Spirit since the days of the Apostles”—according to Ligonier Ministries. The date of October 31, 1517, is when Martin Luther posted his 95 theses to the church door in Wittenberg Church, Germany. And a revolution was born.

Generally, Americans spend very little money on celebrating Reformation Day. On the other hand, another celebration of many churches on November 1st, known as All Saints Day or All Hallows Day, has helped create a marketing bonanza. All Hallows Eve, or Halloween as most people know it, has developed into an event that is anything but sacred. And the cauldrons are bubbling over with cash.

The fear business is thriving in many ways. Halloween leads the devil’s pack. To be fair, many participate in this annual tradition with safe, sane, and even fun ways. Many costumes are meant to delight—not to create nightmares. But here’s the story.

Halloween appears to be the second largest commercial holiday in the United States. And about 100 countries have Halloween celebrations. The age group most involved in some activity is surprising—teens 18-34.

Retail spending estimates on Halloween for 2016 are projected to be around $8.4 billion. That would be a new record. Last year it was $6.9 billion. It’s guesswork, but roughly 171 million people get Halloween kicks, with average spending at $82.93 per person.

And how is that money distributed? Obviously “treats” are a big part of it. About 71% of Americans spend roughly $25 per household to satisfy their fright night visitors. More is spent on decorations—approximately $30 per household. The biggest expense is costumes, with an average cost of $32.

And for the curious, here are the top five costumes for adults: a Batman character, a witch, an animal, a superhero, and a vampire. The top five for the kiddos: an action/superhero, princess, animal, Batman character and a Star Wars character. No Halloween would be complete unless you dressed up your pet! The most popular pet costume characters are pumpkin, hot dog, bumble bee, Lion/Star Wars character, and the devil. (This information is supplied by the National Retail Federation, which hired Prosper Insight & Analytics for the survey.)

But aren’t we missing something? Yes! Haunted houses! More fear marketing. A group that puts these kinds of themed places together is americahaunts.com. They estimate over 300 amusement facilities produce some sort of Halloween or Haunted House at an amusement park or family fun center.

Then there are those “charity” run spooky places. More than 3,000 of these attractions open for one day on Halloween or one or two weekends in October. There are likely other smaller venues in communities that do some form of haunted experience as well.

Theme parks also create fear through thrill rides. A good article on this is titled, “10 Scariest Thrill Rides on the Planet.” Two they mention include Hersheypark’s Fahrenheit, featuring one of the steepest drops in the US, and the X2 at southern California’s Magic Mountain. I’ll pass.

Fear marketing is also profitable in movies. The category of horror films is the seventh highest grossing genre in the movie business. Some horror films turn out to be the most profitable. In 2012, terror films made over $413 million in the U.S.

The biggest box office gross of all time for a fear based film was The Sixth Sense, which came out in 1999. The gross from that film was almost $700 million. The film Jaws holds second place at nearly $471 million. The Exorcist comes in third at over $441 million.

With no pun intended, by now you get the picture. There is money to be made in scaring people. And why do people do this? David Rudd, dean of the College of Social and Behavioral Science at the University of Utah, says “People enjoy feeling scared and seek the feeling out because, deep down, they know they are in no real danger.”

I have a limited fear enjoyment range. I will do some roller coasters and the milder haunted house experiences like at Disneyland. Horror films are off my list. I try to avoid things that will give me nightmares. Why pay for night time sweats? Real life is scary enough!

One of the worst real life fears is found in panic attacks. The person who battles these learns that the very thought of an attack possibly coming on creates a fear of its own. I know about these first hand. While it’s been several years since I had a panic episode, I’ve known the internal terror it can create.

The fear that most people have—admitted or not—is fear of death. There is a very potent passage in the Bible centered around love and our fear of death. A paraphrase reads,

God is love. When we take up permanent residence in a life of love, we live in God and God lives in us. This way, love has the run of the house, becomes at home and mature in us, so that we’re free of worry on Judgment Day—our standing in the world is identical with Christ’s. There is no room in love for fear. Well-formed love banishes fear. Since fear is crippling, a fearful life—fear of death, fear of judgment—is one not yet fully formed in love.

In a season of skeletons and deathly scenes, Christ followers can be fearless—if we are grounded in God’s love.