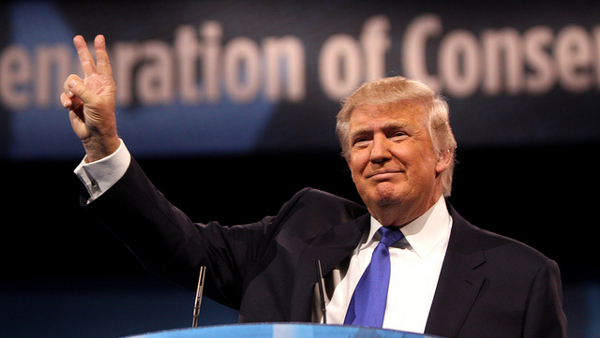 Two weeks ago, I wrote an article entitled “It’s Now Hillary’s Race to Lose,” saying that Trump was so far behind that his only chance of beating Clinton was that some unexpected catastrophe befalls her. I said the same thing a week before that. This latest email controversy is exactly the type of catastrophe I was talking about. Trump now has a genuine shot at winning this election… and Trump’s actions had nothing to do with it. The reason he has a realistic chance of being president is due almost entirely to Clinton’s shocking incompetence and corruption, rather than any political maneuvering on Trump’s part.

In the RealClearPolitics polling average, Clinton’s margin over Trump is now only 1.7%. It was 7% two weeks ago. In the Affluent Investor average of political betting markets, Trump nearly doubled his chances of winning in less than a week, going from an 18% probability to a 30% probability in 5 days. 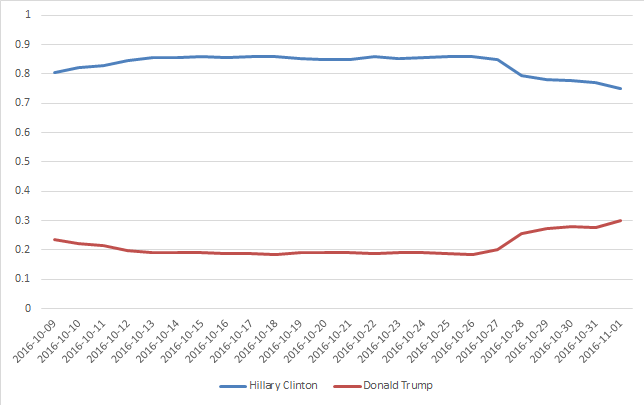 There are two main questions at this point. 1, is Trump capable of staying on message for the next week? And 2, does the Clinton campaign have something on Trump they can release to divert attention away from HRC’s plummet?

It’s tempting to say that Trump can make this a very close election, maybe even a toss-up, by just keeping quiet for a week. But if there is a single constant in this election, it is that Trump always takes the bait. If the Clinton campaign has some dirt on Trump – related to sex or money, because those get Trump mad – they can drop it sometime this week, and watch Trump reverse his momentum by spending all his time attacking an accuser or saying he’s incredibly rich/generous/smart, instead of attacking Clinton on her corruption/incompetence.

But what if they don’t have anything on him? In that case, we’re looking at an extremely interesting last few days. Right now, of course, Clinton is still the favorite to win. She’ll probably continue to be the favorite – though by a relatively slim margin – even if Trump takes a polling lead before next Tuesday, because of Clinton’s superior ground game. We saw during the primary that Trump consistently underperformed his polling; several percentage points lower than polling indicated in most elections, because he was relying on a demographic that aren’t reliable voters. And, more importantly, because he had no voter registration or turn-out operation. He still doesn’t.

The good news is that, if she wins, Clinton is going to enter office horribly damaged. You’ll probably see Clinton supporters crying tears of joy on election night over their latest narcissistic, selfish political messiah, but the next morning they’ll wake up to the bitter reality that their president-elect is both under criminal investigation by the FBI and hated by nearly 60% of the country.