Trump’s Foreign Policy Could Make the World Great Again, Too 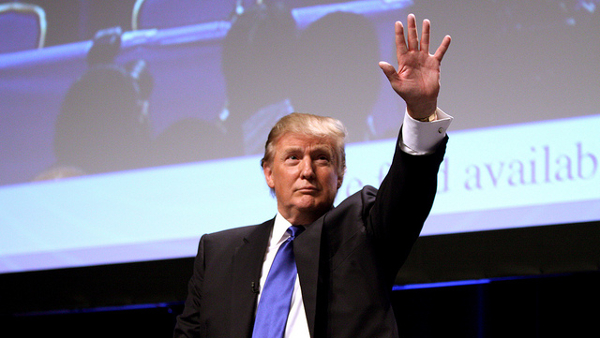 I’ve long maintained that the greatest asset Donald Trump had was his foreign policy. Every presidential candidate claims that their foreign policy is directed entirely towards “keeping America safe,” or some other euphemism for a realist foreign policy. But then their next sentence is about how we need to contain Russia, or pursue regime change in Syria, or how the Iraq War was justified. This was true of many of Trump’s Republican opponents, including the ones I supported.

But Trump was different. Going by his actual policies, he seems to agree with a “classical” realist idea of foreign policy. Maybe it was because of Putin’s flattery, but in Trump there was finally a candidate who had the right idea on Russia. Especially compared to Clinton, who infamously compared Putin to Hitler after the formers’ annexation of Crimea in 2014. The keys on my laptop would wear off if I went over the entirety of Clinton’s long history of interventionist foreign policy, so suffice it to say: She’s never met a war she didn’t like. That’s been true, by the way, since the 1960s, when she was a Republican supporting Barry Goldwater, who wanted to use nuclear weapons in Vietnam.

Trump, on the other hand, has consistently stated his desire to “make a deal” with Putin, presumably in order to get Putin focused on bombing the Islamic State instead of US-allied rebels in Aleppo. Trump’s questioned whether we should be the sole protectors of Japan, and whether NATO is worth keeping around in its current state. Opposition to the Iraq War was a lynch-pin of his campaign (though, to be completely accurate, he did in fact support the Iraq War at the time.)  On all these points, he’s correct. Where other politicians are eternally stuck in a Cold War mindset of political polarization in which every country is either with or against the United States, Trump views other great powers as neither inherent allies nor adversaries. “Peace, commerce, and honest friendship with all nations – entangling alliances with none,” as Jefferson said. Minus the commerce part, that sounds like a reasonable summation of Trump’s foreign policy ideology.

For somebody like Hillary Clinton, or for that matter Marco Rubio, the idea of having a co-operative if not friendly relationship with a great power such as Russia is unimaginable. “Russia threatens NATO allies, supports Iran, fought a 40 year pseudo-war with us, and ‘invaded’ a peaceful neighbor!” they say. Generally speaking, this is correct. But at no point does it occur to the Wilsonian internationalists that the U.S. might bear some responsibility for putting Russia in situations in which it’s forced to lash out to protect itself.

Henry Kissinger was interviewed by CNN’s Fareed Zakaria on Sunday, discussing Kissinger’s meeting with Donald Trump. Kissinger described Putin’s mindset as one in which the United States and the EU are anti-Russian imperialists.

The Russian people, in Putin’s view, freed themselves from Communism in the 1980s on their own. In the 1990s, the United States exploited the temporary weakness of the Soviet Union by inviting countries – that have been considered part of Russia for centuries – into NATO, an overtly anti-Russian military alliance. And more recently, inviting them into a bourgeois anti-Russian economic bloc in the form of the European Union.

Certainly, aspects of this are accurate. For years I’ve been criticizing the Clinton and Bush era NATO expansion into Russian territory. What business does the U.S. have entering into a military alliance with Latvia? Latvia has a population of under 2 million. For almost the entirety of its history, it has been part of Russia. The Latvian border is approximately 300 miles from Moscow. You must remember, the Russian defense against invasion in the past has been to establish depth. Having a wide buffer-zone between the potential enemies and the Russian population centers of Moscow and St. Petersburg is critical for Russian defense. Ask Hitler. Ask Napoleon. Of course a Russian president would consider it a threat for an anti-Russian military alliance pushing itself within striking distance of Russia’s largest city.

There are only two possible justifications for the US obligating itself to the defense of Latvia. One: The US believes Russia is a global strategic threat dangerous enough to justify Cold War-esque containment. Or two: the U.S. doesn’t really view NATO as a military alliance, but rather a liberal international club like the United Nations. Putin views the world in terms of rational actors and hard power. In international relations terms, he can be described as an offensive realist. So to him, the idea of the U.S. willingly turning arguably the most powerful military alliance in human history into a liberal soft power institution is nonsensical. Logically, for him, the U.S. must be trying to contain Russia.

And so Russia lashes out. They annex Crimea, they support a separatist movement in eastern Ukraine with special forces. They viciously attack anti-Assad, anti-Islamic State rebels in Aleppo. They support Iran at the UN Security Council. And this is where the U.S. bears some responsibility for Russia’s actions. There’s some nuance to these situations of course, but the ultimate cause is that U.S. aggression convinced Putin that he had to take extraordinary measures to put some distance between Russia and the U.S.

Trump has an opportunity to drastically change U.S. foreign policy for the better here. As Kissinger said, Trump has no obligations. He’s someone who can look objectively, uncorrupted by lobbyists and other Cold Warriors, at the American relationship with Russia and recognize that it was the failure of the liberal elites that created our problems with Putin.

But there’s no guarantee of that. Trump’s mindset means ultimately little if he fills the State Department and Department of Defense with hawks. Rudy Giuliani and John Bolton are both being considered for Secretary of State. It’s hard to imagine two worse choices for the job. Giuliani is an unrepentant supporter of the Iraq War, a supporter of the policy of systemic regime change in the Middle East, and a harsh critic of Putin.

Bolton is even worse. He’s the biggest hawk God ever made. He’s one of those guys who’s been saying that Iran is 3 months away from getting a nuclear weapon for 15 years. Recently he stated his belief that the U.S. must pursue regime change in Iran, even as Benjamin Netanyahu, Prime Minister of Israel, is advising Trump to keep the Iran nuclear deal. He’s also recently advocated a “confrontational” relationship with Russia. You could throw a dart at a map and John Bolton would likely want to invade and overthrow the government of wherever the dart lands. He and his ilk seem to have a G.I. Joe understanding of the world. Putin’s a “bad guy,” ergo Putin must be attacked.

There is some hope for the office of Secretary of State, however. Mitt Romney has the potential to be a great chief diplomat. On Russia, his record is somewhat muddled, but at least he understands Putin’s mindset. Over the years, Romney has made several public statements conveying an adult understanding of the Russian situation. Take, for instance, his WSJ op-ed in March of 2014:

“That was the time to talk with our global allies about punishments and sanctions, to secure their solidarity, and to communicate these to the Russian president. These steps, plus assurances that we would not exclude Russia from its base in Sevastopol or threaten its influence in Kiev, might have dissuaded him from invasion.”

That indicates to me some understanding of why Russia lashes out. Putin views Obama as naïve, and the U.S. as threatening its influence over border states and Russian military assets.

The mix of Trump’s virtual infatuation with Putin and Romney’s strong-but-understanding view of Russian foreign policy is a recipe for a highly successful foreign policy. Picking a neo-conservative internationalist Wilsonian hawk in the vein of Bolton or Giuliani could damage U.S. – Russian relations beyond repair.