The Nativity Means the End of Empire 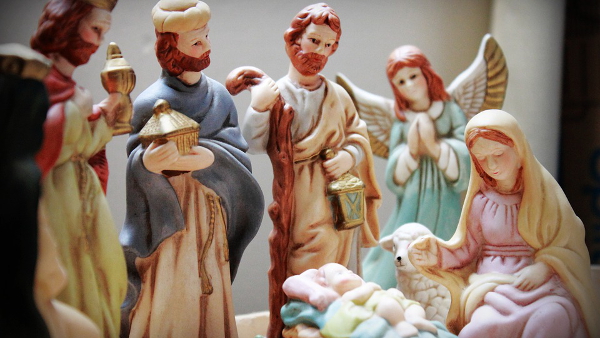 “My grace is sufficient for you, for power is perfected in weakness.” – Jesus of Nazareth to his imitator Paul of Tarsus

Around the world this season, humans of every culture and language are singing:

Jesus’s birth is a cause for celebration and joy. However, those who wish to be keepers of his flame are often prone to err in fashioning an objectified version of Jesus, a mental projection of the kind of power they themselves admire or aspire to; namely, a role model who demands submission and praise. Not so, as the quote illustrates above.

What kind of strange power is perfected in weakness? The answer to this mystery continues to erode the very foundations of strong structures, political-social orders, across the globe wherever the story is told and imitated, however palely by its imitators.

Before the Christmas season, there was the ancient Roman festival of Saturnalia. The festival celebrated the god Saturn and the last drips of light the community could enjoy before the coming winter solstice, the shortest day of the year. Light was associated with wisdom and understanding. And so candles were exchanged along with other gifts and master/slave roles were reversed while masks anonymized everyone into a flurry of sameness.

Saturn was the god of agriculture, wealth, and abundance. As such, his figure embodied the values of the reigning sacrificial world order: domination systems are unquestioned and forever cyclically refreshed with new rulers and human sacrifices. Indeed, the ruler and sacrifice, ostensibly polar opposites on the hiearchy of Roman life shared an odd mirror relationship in that the supreme rulers could easily become a human sacrifice, lest the passions of the mob overrun his ability to harness it.

Each year, a Roman soldier was chosen by a lottery to be the “king” of the month’s festivities. An exceptional-looking young man was garbed in royal attire in imitation of Saturn. He was paraded around the festivities and given privileges to command others to do ridiculous acts as well as indulge in every kind of vice imaginable. To complete the festival and the imitation of Saturn’s persona itself, the king would cut his own throat on the altar of Saturn. Myth recounts Saturn himself being sacrificed for the salvation of the world.

This was the “light” or wisdom of the world as man knew it. In fact, evidence of mock scapegoat-king rituals is found all over the ancient world. The world and the logic it functions by is cyclical, hiearchical, both of which are governed by sacrifice. Slaves know their place at the lowest end of fellowship, a fact only reinforced by the sacred time’s temporary allowance of taboo role reversals in which masters served slaves.

Saturnalia’s controlled re-creation of the loss of difference and order reflected the primordial chaos the imperial Roman cult saved its people from by its ordering light of gods demanding sacrifices, be it in rituals, festivals, or war campaigns to preserve the collective body and everyone’s place in it.

In the early 4th century a young soldier named Dasius of Durostorum threatened that social order. He was selected to be the Saturnalia king for the month, but as a Christian, refused to partake in the imitation of Saturn, the accompanying pleasures, and its eventual required sacrifice of his life. For Dasius, no animal or human’s life was required by God. According to Jesus, the role model Dasius imitated instead of Saturn, “God desires mercy not sacrifice.” Dasius was summarily beheaded lest he became a total buzz kill and turned the sacrificial order of Pax deorum, or peace, of the gods into their anger.

Saturnalia’s festival of light and Dasius’s nonviolent defiance of its violent logic gives us context for what is so significant about the birth narrative of Jesus. The Gospel of Luke starts the story with a nod to the light, or logic, of empire: “Now in those days a decree went out from Caesar Augustus, that a census be taken of all the inhabited earth.” Caesar Augustus inherited the throne from Julius Caesar, himself a victim of the political whims of the mob in a flash of disorder that led to his sacrifice. Augustus was named “Son of God” by virtue of his ancestry.

History records Augustus’s reign as one marked by peace and order. He accomplished this through his effective war campaigns that united the people around common monsters to sacrifice their lives to defeat for the empire. This “People’s Senator” very much maintained the careful hieararchy of authoritarian control as administered through the safe “pharmakos” or “drug” of pagan sacrifice.

Luke’s “decree of Caesar Augustus” can be satirically read “the Word of the Son of God.” The Gospel of John starts his origin telling of Jesus with an interesting parallel: “In the beginning was the Word, and the Word was with God, and the Word was God. He was in the beginning with God. All things came into being through Him, and apart from Him nothing came into being that has come into being. In Him was life, and the life was the Light of men. The Light shines in the darkness, and the darkness did not comprehend it.”

The Gospel writers are intentionally contrasting Jesus, “Son of God,” “Light,” and “Word,” with the pagan parallel titles and words of their contemporary imperial world order. The light of Saturn is sacrifice. The light of Jesus is “mercy, not sacrifice.”

Luke’s story points out that Caesar Augustus’s decree is a census, a means of assessing the value of the empire’s global subjects so as to apportion a tax on them. Augustus’s Son of God status rests on his ability to tax human beings across the globe. The power to tax, as Daniel Webster said, is the power to destroy. Indeed, his image is carried with everyone of his subjects, perhaps not engraved on their hearts, but certainly on the coins he minted with his likeness and “Son of God” title and with whom he forced their submission and obedience.

Jesus on the otherhand, as Paul says, insists human beings are the image of God, all human beings regardless of slave or master status, political privilege, or control over political violence. In contrast, imperial coins are cold, lifeless bearers of a cyclical old imperial order, whose god-kings are always grasping to extend their turn at the helm of harvest before the darkness of winter—and its accompanying sacrifice—falls.

Caesar Augustus was born near the Roman Forum, the very heart of Roman grandeur and cultural esteem. Jesus, this new “Son of God” is born in a barn food trough, considered a bastard child to a woman of ill-repute. For Augustus’s Saturnalia festivities, slaves were only mockingly permitted to be served by their masters for a time. Jesus continues his stable revolution against imperial light and logic by washing the feet of his followers as performance art prefiguring a future new world order, one where the first are last and the last first.

Caesar Augustus was spared the sacrificial end of his predecessor by channeling the peoples’ tensions towards sacrificial safety valves in the form of successful military campaigns against foreign groups like Germania and Hispania. Jesus, by contrast later asks in Luke, “Do you think that I have come to bring peace to the earth? No, I tell you, but division. From now on, five in one household will be divided, three against two and two against three.”

By refusing to sacrifice others and model leadership that lords power over others, Jesus destroys the light and logic of every empire in history. In performing the mock-king sacrificial ritual, Jesus’s nonviolent forbearance and forgiveness of his own persecuting mob at the Cross exposes the darkness that is the light and logic of empire. It is not the pie-in-the-sky gods that demand sacrifice but human crowds possessed by rage and fear. Just like the Romans covered their conscience by blaming “Saturn” for the need to sacrifice innocent life, so too, Jesus’s community said it was God’s will that Jesus perish so the “whole nation would not perish.”

Jesus’s word of light that outshines the darkness of imperial sacrificial order continues to infect humanity to this day. Yet man, stubborn and prideful in his ignorance, is slow to renounce it completely. And so we are ever conscience of the victims most likely to be sacrificed by our ancestors: ethnic minorities, the disabled, the infirmed, the weak, the disfigured, even tired kings. Yet our sacrificial impulse always finds a creative way to resurrect the old light and logic of expelling (incarceration) or murdering (war) sacrifices for the preservation of collectivism and empire.

“Every empire of our size got it wrong, but we are the exception. We’ll use military only for just, victim-supporting causes, not grandeur. We’ll only create laws that place nonviolent persons in cages to protect potential future victims,” America promises. Yet the sacrificial cat is out of the bag. We cannot go back. The world order of cyclical sacrifice has been forever broken. It consumed the one person whose wrongful collective persecution continues to defang and neuter our most barbaric state-cult tendencies.

And in the wreckage of the worlds’ dying systems of sacrifice and hiearchy, now ever falsely garbed in appeals to social justice, the King we billions sing about declares: “Peace I leave with you; My peace I give to you; not as the world gives do I give to you. Do not let your heart be troubled, nor let it be fearful.”

The end of empires continues under the progress of a new world order, a progressive linear path of starts and stumbles no longer trapped in an endless cycle of the pagan sacrificial pattern. It pulls a future of mercy and nonviolence as the glue that holds communities together into the present. Its vehicle for change is not violence and theft, such as monopoly coinage and taxation. But rather human beings, hearts alight, voluntarily becoming the change they desire in the world.