Drop the Scapegoat: The Pragmatic Case for Christian Nonviolence 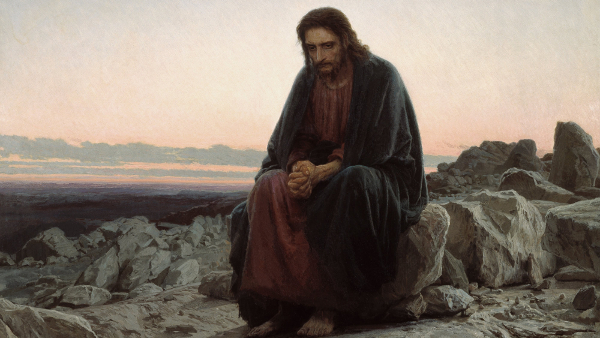 Our culture is engaged in a cinematic Mexican standoff. But the weapons we point at each other are only real as long we believe they are. If we broke the 4th wall of our shared fantasy script, we’d realize all the weapons are actually harmless. But we really don’t want to do that.

The problem is every faction in the standoff thinks all the weapons are real. But if we all drop our weapons, we’ll find out how harmless they really were. Rather than a heavy metallic thunk, they give a plastic clack upon hitting the ground. The only way to solve it is for someone to be the adult in the room and put down their plastic weapons to create a reciprocal pattern of confidence in the other standoff participants. As long as all parties believe that their weapons are real and keep the standoff going, everyone continues to suffer.

Picture our cultural rivalries as hostage standoffs. Every group holds a scapegoat they threaten with deadly force. They feel totally justified in holding their respective scapegoats. Their goat truly is deserving of such a life threatening predicament. And each faction thinks if they let go of their scapegoat, they will be harmed by the other members’ scapegoating power. That they will become the ultimate scapegoat of all the other factions. So they hold their pet scapegoat as leverage.

The factions engaged in this no-win situation are legion. But the one I want to single out is the Church. Jesus’s scandalous cultural paradigm of “taking up our cross” to follow him necessarily means the church should be the adult in the room. The church should begin the slow, humbling process of cultural reformation by dropping the collective scapegoats they themselves have participated in holding so that other parties imitate.

I know, people will cite dramatically lower church attendance and doctrinal ascent numbers, but the fact remains that in a time when racial, class, sex, and ethnic identities continue to divide us, we are still overwhelmingly a culture of self-identified “Christ followers” or in plain speak, wannabe Jesus imitators.

That’s a cultural fact with which the Church should work.  Instead, churches are largely content to run their programs like safe ideological market niches, each segregated to a nit-picked historical schism of perfected mental ascent or class-based trends or, increasingly, fashion. “Grace” is thrown around as a cheap pacifier as long as its safely not applied to awakening to the collective violence which parishioners endorse in hiring politicians to continue needless foreign aggression, economic coercion, and mass incarceration here at home. That would be too hard.

So progressive churches hand out clam chowder and cookies to homeless parks, but cannot dare tell the community to end its hiring of politicians that create generations of no-win wars and violent state rigged-ulations that create systemic poverty and mental issues that plague the homeless. Yes, give the cookie and hug, but if your church leaders cannot speak honestly about the implications of Jesus’s command to “Do not repay evil with violence,” then let the homeless damn that cookie. Such a hug is of Judas, not Jesus.

Meanwhile, evangelical churches are content to make half-baked appeals to life every four years a Republican candidate is up for the presidency. To hear them, you’d think protecting nonviolent life from violence is only available to the unborn child in the womb and evangelical wedding cake bakers. They, like their liberal brothers, don’t understand that if you cede the principle that law can become a sword rather than a shield, to violently stop nonviolent acts you deem vice, the only result is anti-law chaos: a neverending standoff of scapegoaters with new laws that scapegoat a diversity nonviolent people: drug users, prostitutes, startup innovators, evangelical cake bakers, broken tail-light guys, raw milk drinkers, alternative medicine advocates, those who wish to opt out of funding government schools, or overseas resistance in countries we casually bomb for high finance and monetary interests.

Instead, law should be an unchanging shield: only an extension of our own personal ethical rights to defend property and life from acts of physical violence. If you saw your neighbors assaulting an old lady, it would be ethical to use defensive force to stop the act. It can then be extended to the community as a law against assault. But what if your neighbors were doing drugs in their home? Would you be within your ethical right to barge into their house with arms, tackle them, put your knee on the back of their head, taze them and put them in your basement until they served enough time to atone? Of course not, so do not hire anyone to make a law that does the same.

Be the Church—the called out ones—who insist on self-sacrificing fear of our neighbors rather than sacrificing our neighbors. That is what it means to beat our swords into ploughshares in imitation of Jesus.

That’s the ethical argument for Christian nonviolence as law. But for some of us, the nonviolent teachings and actions of Jesus are only suggestions and lofty sentiments to compartmentalize into the sky. On Earth, the word “Jesus” is relegated to a cultural term for belonging to a clan. Or perhaps a ticket into self-assurance or free guilt therapy sessions. We don’t care to understand how “Jesus is Lord” changes “Caesar is Lord” into a radically different paradigm, especially for Christians living under a democratic “Caesar” that maintains its scope and power by their own active consent.

So what about the practical, pragmatic, or even cynical among us unmotivated by appeals to Jesus’s ethics? That brings us back to the Mexican standoff analogy of our culture. If the Church does not teach its parishioners to let go of their pet scapegoats, the church will increasingly be consumed by the division such dereliction of moral clarity creates. For the left, the sins of “whiteness,” economic freedom, bigotry, anti-egalitarian Russians or greed will continue to be used as justification for creating laws that violently, physically scapegoat those that stand as Others. For the right, contempt for laziness, drug addiction, and insecure ignorance of foreign blowback, will continue to scapegoat millions of nonviolent people into violent prisons and war hells on Earth. Out of sight, out of mind.

But the attendance numbers don’t lie, the Church, wedded as it has been to empire, is becoming the scapegoat supreme. Unless we imitate the common unifying person of Jesus in divisive love of the other rather than violence-based cultural standoffs, the Church will be picked apart by competing ideologies as an irrelevant carcass. A Christ-less Christianity creates an impotent vacuum for racial, sexual, and ethnic resentments to stew and coagulate into neverending cycles of revenge. Blackness or Conservatism or Americanism or Womanhood or Social Justice are inanimate, empty words without a particular person intrinsic to their definition. As such, they build cultural movements on the chaotic quicksand the idols we make always do.

These ideologies become cold, sacrificial machines that require the blood of misfit Others to maintain their existence. As such, the Church will be violently coerced and maligned for its views and institutions as ideologies use the cruciform power of perceived victimhood to justify punishment of the nonviolent speech or lifestyle vices of the Church. All of the violence of this coming cultural trend will live by the same sword Christians—black, white, brown, red—currently have the numbers to unite against in imitation of their common model Jesus Christ. If only they would.

In reality, the western trend towards scapegoating the traditional Church will be a blessing. It allows us to participate more fully in the imitation of Jesus. But we still have a choice in how this test plays out—the easier way of voluntarily self-sacrificing the abusive sword of the state or the hard way of having the swords pile up against our necks. It’s always easier not to wait to be asked by a member of the in-crowd if we have a Galilean accent, like Peter was.

The ball is in the Church’s hands. It still has time to be the adult in the room and drop the sword. It only cuts so long as we believe in its deceit that violence is true power. Unleash the transformative power of Jesus’s culture of nonviolence through the ending of all laws that use theft and physical violence against nonviolent persons.

Drop the scapegoat. Let the captives free. Turn the other cheek when their behavior insults you. Wash their feet. Hold each social failing—be it adultery, drug use, greed, or high fructose corn syrup addiction—accountable through tough, tangible love, not lifeless, sterile bureaucratic laws and family-destroying incarceration.

It gets messy. Love the IRS agent—there is no space between you. Help him get a better paying job to use his talents as you help to peacefully abolish his agency. Make governments so small and local, you can easily contribute to “help a brother out” funds for those who object to or can’t afford the minimal tax bills. Create voluntarily-funded alternative cards for the poor that make EBT irrelevant. And for God’s sake, let a woman share tamales from her home kitchen.

The confidence of letting our scapegoats free is contagious. It won’t be easy, but our tired old cultural standoff won’t stand.