The French Have No Word for ‘Deplorable’ 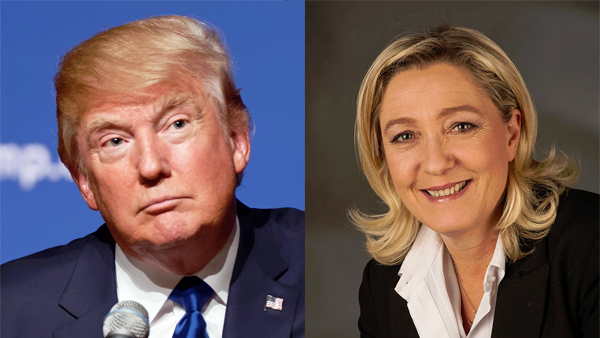 French 10 year bond yields shot up to a four-year high this week, in response to alt-right National Front presidential candidate Marine Le Pen’s polling surge. The first round of voting for President is in April, and the centre-right and centre-left candidates are both polling around 20%, whereas Le Pen is polling at 27%.

Emmanuel Marcon, the left wing candidate, is currently projected by the betting markets to have a 38% chance of winning. Le Pen is a narrow second, at 36%. The conservative candidate, Fillon, is trailing at below 30%.

This is not unexpected. Le Pen has neither the charisma nor the political ability of Donald Trump, but she’s operating in a socio-political environment that is arguably more primed for a populist revolt than the United States was in November. The French liberal elite is even more condescending and radical than its American equivalent. The terrorism problem in France dwarfs that of the United States, as does the immigration problem. US immigration is coming from conservative, Catholic South America, a culture compatible with ours. Not so with France. French immigrants are from the Muslim world, and large numbers of them, in some cases the majority, have views incompatible with Western values of free speech, freedom of religion, democracy, etc.

My point is this: let’s not be so shocked when a candidate promising radical solutions to radical problems is met with success. The markets, both economic and political, do not seem to recognize the significance of the global alt-right nationalist revolt. And whether it’s the AFD party in Germany, or Geert Wilders in the Netherlands, or Marine Le Pen, or Brexit or Trump, we’re dealing with a pan-civilization crusade that is not going to dissipate unceremoniously after a couple weeks of protest.

Speaking of protests, the left’s breakdown over Trump’s victory is only going to strengthen the movement. In the UK this week, there have been mass protests against a planned state visit by Donald Trump. The obvious question is, “Where were these protests for Xi Jinping, Chinese tyrannical president?” The double standard and insanity of the left wing reaction to Trump’s mere existence is off-putting to even people who disliked Trump. So, while I’m sure the protesters are happy to signal virtue to their fellow left-wing radicals, they don’t realize how much they’re helping the cause of the Le Pens and Trumps of the world.

We’re certainly not going to see equal success for these figures everywhere – Germany is likely to stick with Merkel through thick and thin – but it would be foolish to assume Brexit and Trump were coincidences. It bears repeating: this is not a brief and fleeting series of protests like Occupy Wall Street. We’re dealing with a movement, not a moment.