The Clash of the Cross and the Sword 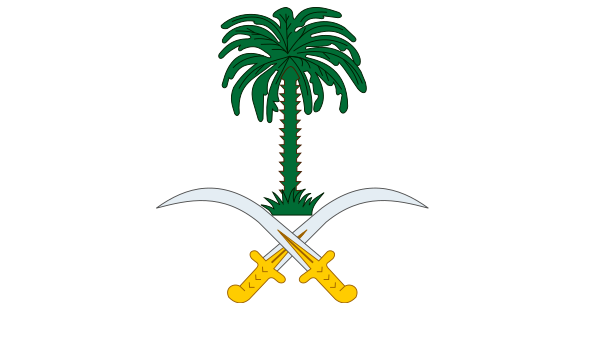 The Coat of arms of Saudi Arabia.

Since 1950 Saudi Arabia’s widely displayed emblem depicts two naked swords “in saltire” beneath a palm tree. The Saudi Royal Standard includes a third, bigger, sword in its center. The sword symbolizes the Royal House of Saud. Ibn Saud (1876 — 1953) conquered Arabia’s tribes, won the Eastern province, and founded the modern state of Saudi Arabia by the power of his sword. The Muslim Brotherhood similarly uses an emblem of two crossed swords beneath a Qur’an.

The saltire is a heraldry symbol in the form of the diagonal St. Andrew’s cross, like the letter X. Tradition says that Jesus’ disciple, St. Andrew, was martyred on such a cross. Thus a saltire cross appears on many flags including those of England and Scotland, where modern constitutional government and republican democracy were born. The contrast between a saltire cross and crossed swords communicate the core difference between Scotland and Saudi Arabia.

Saltire is the symbol of an unarmed, self-sacrificing martyr . Turning it into crossed swords — instruments of terror — captures the heart of the civilizational conflict between Islam and the West.

The cross shaped saltire on the Scottish & UK flags symbolizes God’s means of human freedom, including heroic freedom to critique one’s culture, religion, and governance. It is freedom to explore new ideas, to love and build new relationships of trust and respect. It means seeking reconciliation with one’s enemies. The message of the cross is the seed of God’s kingdom. Turning the cross into swords explains denial of individual freedoms to Muslim majorities within Muslim nations, subjugation of Muslim minorities in Islam’s holiest land, Sunni-Shia conflict, persecution of ethnic minorities such as Kurds, never ending hatred of Jews, Christians, and Hindus, absence of free-press, freedom of conscience and conversion et cetera.