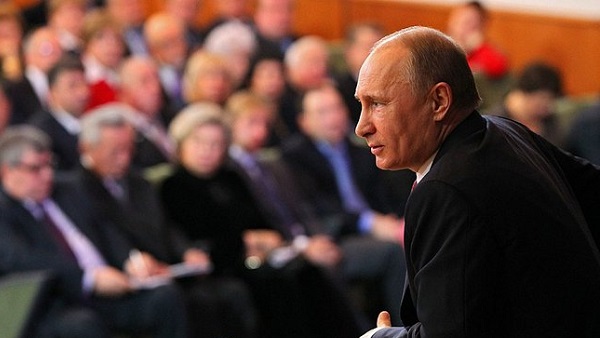 In order for an ancient tribe to successfully eat or purge a scapegoat, the community first had to scandalize their target with a lying accusation—that the victim was guilty of high crimes against the very social order of the land. This is what is behind the envious mobs and the media priests’ daily work to tie Trump and any of his allies to rumors of “Russian hacking of the election.” The election ritual is the life of the state and its order.

The established media and political hegemony is trying to stab as many pin pricks into Trump as possible with the goal of fashioning him into an agent of an enemy Other who is disturbing the essential sacred ritual of elections. This is all about setting him up for a great devouring to provide orgasmic catharsis on the part of those who covet his power and the state of being they perceive it providing.

One does not have to share Trump’s ideology to see this sorry human anthropological fact and pity all parties involved.

My question is: when will we all stop playing this game of hate and blame and realize how absolutely stupid the state makes us? I mean, not the state itself as some alien entity foisted upon us. But the sacred love of power we all tend to have and manifest into a monopoly on violence we call the state.

The mindlessness of the rumors are embarrassing. The millions of leftists now constantly hallucinating about Russian spectres in the reflections of their socially aware soy lattes do not actually care about Russia all of a sudden. They only know what the TV’s like what, six multinational corporations and their Internet extensions tell them: Russia hates gays. Russia loves Trump. Trump stands in the way of my vicarious identity avatar being in the highest symbolic seat of power in the world. Therefore, denial, anger, paranoia, hate.

Similarly, the right’s newfound infatuation with Putin is not based on any real knowledge of the man, only that their chosen avatar indicates a friendly air towards him and that Putin foiled many of their past scapegoat Obama’s machinations.

Do you realize we could pick any country on the map and with enough time of media cookie cutter scandals and marketing words like “butcher,” “threat to democracy,” “thug,” etc. we could get any of these tribes to support violently sanctioning said country, and with another few rumors and allegations, get popular support for violent meddling, a coup, or some other intervention?

Don’t believe me. Ask Assad, he was just dining with Kerry and his wife until his luck ran out in the face of our imperial cult’s financial interests. The same goes for Gaddafi, Hussein, Mosadegh.

Most Americans knew very little why they should support the murder of these individuals and the violent destruction of these foreign rivals. They fell under a trance of groupthink. An ecstasy of oneness that occurs when they are transported by their frustated mundane lives to a higher plain of justice and blood vengeance for national greatness.

Still, support for acts of war like airstrikes, no-fly zones, and sanctions that starve millions of innocent families are always most fervent and forebearing with the party that shares the same brand with the occupant of the presidency. They imitate their avatar’s resolute righteousness often til the bitter end even as the war high’s diminishing trip reveals itself with photos of carnage coming in steadily with no accompanying tangible benefits from the mission.

Trump, for all his many foreign policy faults, has so far refused to play the standard bipartisan script on targeting a new scapegoat in Putin. So it’s given the media and Washington order, who didn’t get the memo that the script had changed, an occasion to scandalize him. Just think, what would happen if a Rubio or Clinton was in office? Would any of the media question or work hard to daily scrutinize, challenge, and “fact check” the standard script of Russian intervention both perform? Of course not. And would much of the Republican base stand in opposition to increased sanctions against Russia and no-fly zones in Syria? Hardly.

Do we see the insanity of this whole ruse? People’s passionate opinions are not really their opinions. They are just copying their ideological tribal peers so they can share the pleasure of hating and venting their frustrations onto someone else. That is not a defect in our modern democratic process. That is its masterful design working perfectly.

Humans have always found unity and satisfaction in finding a common villain to scandalize. This ganging up and shaming and pouring every ounce of wrath in oneself onto a common enemy is an ancient practice that dates back to the very origin of human culture. Evidence of ritual human sacrifice is as ubiquitous to archaic sites as tools and fire-making.

Far from being an odd quirk, sacrifice was the fundamental glue that held these communities together. Tensions always build. Humans are always bound by jealousy and paranoia from comparing themselves to their neighbors. But that tendency to mirror our neighbor is also something that can spill out into a righteous blaming of a common enemy for all of strife, tension, and fear that consumes our daily lives.

By declaring “It is finished” on human sacrifice and imitating Jesus’s love of enemy, Christianity has slowly eroded the effectiveness and raw brutality of human sacrifice. Western culture experienced the longest sustained infection of Christianity’s anti-sacrificial leavening of strong sacred structures and thus remains the only culture in the world today totally obsessed with self-flagellation of its own ethnocentrism and unfair treatment of minority interests in its history. The only one.

The problem is our culture’s guilt obsession with past mistakes betrays the ultimate conceit: that our public decrying of others’ bad behavior makes us immune. This is a means of gaining power and advantage over others by using victims as a “human shield” of criticism. Jesus dealt with such Victimism as such: “And you say, ‘If we had lived in the days of our ancestors, we would not have taken part with them in shedding the blood of the prophets.’ So you testify against yourselves that you are the descendants of those who murdered the prophets. Go ahead, then, and complete what your ancestors started!” – Matthew Chapter 23 NIV

Victimism is the dominant state religion of the west. It always wails against its forefathers’ abuses as a means of gaming for more power. So Trump can be torn apart by progressives, who marched by the millions in 2004-2006 against Iraq War lies, for daring to seek peace with Russia because he refuses to imitate the cool speech, self-criticism, and solemnity of the office the history book approved politicians of the system always provide.

In other words, he’s been cast in their favorite show. The one that provides the best opium for the masses money can buy. And he’s not playing it right. He’s a bad actor for their sacred theater. He’s not speaking in vague, eloquent empty sweet words. So his open self-obsession and Twitter rants sullies the sacredness of the state and thus “turns the lights on” to the barbarity and ridiculousness of the whole enterprise.

People get enraged when you take their opium away.

By the way, why do I use “sacred” so much to describe the state, elections, and politics? Because sacred is that which is unquestioned. It is that which is not supposed to be seen or spoken. The sacredness of statecraft is that it is the madness of crowds lusting after power. It is not needed to order society. But do not bother telling its fervent participants that: they need their obsessed rivalry with their enemy tribe, for in them, they see themselves.

It’s said we are not to discuss politics at dinner.

It’s said we are not to discuss religion at dinner.

But I repeat myself.

In the mean time, that’s me in the corner. Losing my religion.