The Cross: The Power of Faith 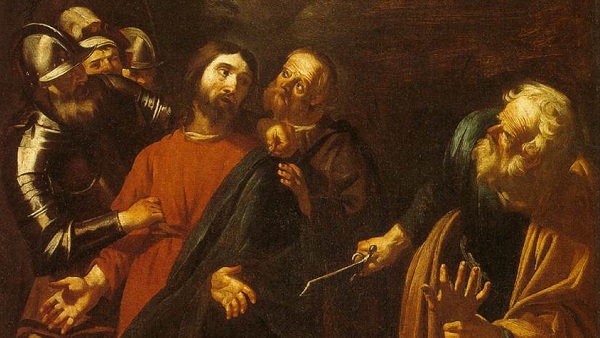 When the Chief Priests sent a mob to arrest Jesus in the Garden of Gethsemane, one of his disciples, Peter, drew his sword. He struck off the ear of one of the Chief Priest’s servants. The Lord rebuked Peter and restored the servant’s ear with a touch of love and power. The Lord had a superior power. He accepted the arrest, the mock trial, the humiliation, the torture, the death — the cross. His power came from knowing his Father. He demonstrated to his disciples that the victory that overcomes the world is faith. (1 John 5:4)

Some secularists think that the difference between the West and Islam is democracy. They lack the worldview resources to understand that the fundamental difference lies in two faiths. Islam rejects the cross because it fails to appreciate the faith that has the power to take up the cross, rather than the sword.

Modern America was forged by the spiritual revivals known as the First and Second Great Awakenings. The pioneering revivalist, Jonathan Edwards, was America’s first philosopher. George Whitfield, the second most influential revivalist, is called the “First American” because he was the first public figure to travel around and preach in all 13 colonies.

America was awakened to a spirituality, very different than Islam because from the Apostle Peter, Edwards understood the faith that enabled Jesus to embrace the cross — unjust suffering.

The Apostle, Peter preached the cross. The seeds that he planted bore fruit that amazed him. Genuine faith enabled the new disciples to rejoice in their persecution. Seeing their response to injustice, Peter wrote:

Praise be to the God and Father of our Lord Jesus Christ! In his great mercy he has given us new birth into a living hope through the resurrection of Jesus Christ from the dead, and into an inheritance that can never perish, spoil or fade. This inheritance is kept in heaven for you, who through faith are shielded by God’s power until the coming of the salvation that is ready to be revealed in the last time. In all this you greatly rejoice, though now for a little while you may have had to suffer grief in all kinds of trials. These have come so that the proven genuineness of your faith—of greater worth than gold, which perishes even though refined by fire—may result in praise, glory and honor when Jesus Christ is revealed. Though you have not seen him, you love him; and even though you do not see him now, you believe in him and are filled with an inexpressible and glorious joy, for you are receiving the end result of your faith, the salvation of your souls.

How could Christ’s followers, victims of unjust persecution, be filled with “an inexpressible and glorious joy”? Peter explained the cross:

If you suffer for doing good and you endure it, this is commendable before God. To this you were called, because Christ suffered for you, leaving you an example, that you should follow in his steps.

He committed no sin, and no deceit was found in his mouth.” When they hurled their insults at him, he did not retaliate; when he suffered, he made no threats. Instead, he entrusted himself to him who judges justly. “He himself bore our sins” in his body on the cross, so that we might die to sin and live for righteousness; “by his wounds you have been healed. You were like sheep going astray,” but now you have returned to the Shepherd and Overseer of your souls.

In his influential book, A Treatise concerning Religious Affections, (1746) Jonathan Edwards expounded true spirituality and its worldview as described in Peter’s Epistles. The spiritual life is love, not violent Jihad. It is a life of self sacrificing love, lived in the power of the supernatural Spirit of God.

The great revivalist, John Wesley, published an abridged version of Edward’s treatise in England. Teachings such as these, not medieval crusades, were the seeds that created the beautiful culture that attracts Islamic immigrants. Jihadist leaders use Western “evils”, such as the excesses during crusades and slavery, to recruit Muslim youth in Western countries. They succeed, in part, because secular educators deplore just wars along with the unjust brutalities. Unfortunately, these scholars have little understanding of the transforming power of the cross injected into the West by the Bible and through the Great Spiritual Awakenings.