The Cross: The Power of Reconciliation 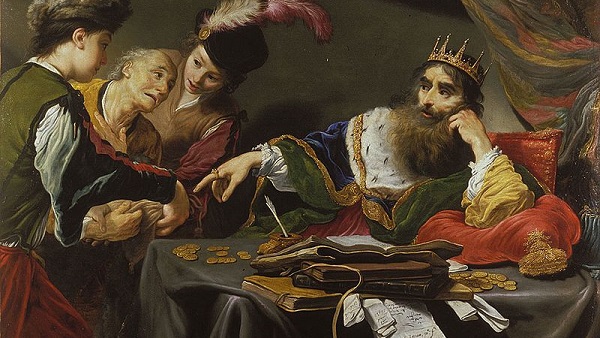 Parable of the Unforgiving Servant by Claude Vignon

Rome used the cross to suppress its subjects. The Lord Jesus transformed it into the symbol of our freedom: our reconciliation with God and our enemies.

The United Nations and the USA were using all their resources to reconcile the two most powerful Sunni and Shia states, Saudi Arabia and Iran. Peace talks had been scheduled for January 2016 to end their proxy war in Yemen. Almost 3,000 civilians have died in that civil war which is fanned by these powerful rivals. The historic rivalry between these two Muslim powers plays a huge role in conflicts in Iraq, Syria, Lebanon, Palestine, and Israel.

Today (as I am typing these words) the sword of Saudi Arabia derailed those peace talks by executing Sheikh Nimr al-Nimr. These two leading Muslim nations refuse to sit together to talk peace. Their generals are strategizing how to execute and win wars.

The Lord Jesus required his followers to become peace-makers, to take up their cross. He taught that they needed to forgive as God had forgiven them. The Lord asked them to pray, “Forgive us our debts as we forgive our debtors.” Jesus told his disciples, “if you forgive other people when they sin against you, your heavenly Father will also forgive you. But if you do not forgive others their sins, your Father will not forgive your sins.” (Matthew 6: 12-14)

Every sinner facing judgment wants forgiveness, but forgiving those who sin against you is another matter. Peter was troubled by Jesus’ teaching that God’s kingdom is a kingdom of mercy. That to receive mercy we had to be the sons of our Father, and be merciful. Jesus’ disciple Matthew recorded:

Then Peter came to Jesus and asked, “Lord, how many times shall I forgive my brother or sister who sins against me? Up to seven times?”
Jesus answered, “I tell you, not seven times, but seventy-seven times.
“Therefore, the kingdom of heaven is like a king who wanted to settle accounts with his servants. As he began the settlement, a man who owed him ten thousand bags of gold was brought to him. Since he was not able to pay, the master ordered that he and his wife and his children and all that he had be sold to repay the debt. “At this the servant fell on his knees before him. ‘Be patient with me,’ he begged, ‘and I will pay back everything.’ The servant’s master took pity on him, canceled the debt and let him go.
“But when that servant went out, he found one of his fellow servants who owed him a hundred silver coins. He grabbed him and began to choke him. ‘Pay back what you owe me!’ he demanded.
“His fellow servant fell to his knees and begged him, ‘Be patient with me, and I will pay it back.’
“But he refused. Instead, he went off and had the man thrown into prison until he could pay the debt. When the other servants saw what had happened, they were outraged and went and told their master everything that had happened.
“Then the master called the servant in. ‘You wicked servant,’ he said, ‘I canceled all that debt of yours because you begged me to. Shouldn’t you have had mercy on your fellow servant just as I had on you?’ In anger his master handed him over to the jailers to be tortured, until he should pay back all he owed.
“This is how my heavenly Father will treat each of you unless you forgive your brother or sister from your heart.”

Saudi Arabia’s kingdom of the sword lacked the spiritual power to pardon Sheikh Nimr and partner with him to build a peaceful Saudi Arabia. The best that the United Nations can do is to pressure the warring powers to sit together in one room. But the UN has little power to persuade Iran not to fan the fires of civil war in Saudi Arabia. Many have vested interests in breaking up the artificial and forced unity of Saudi Arabia. The sword cannot heal wounds that have festered for fourteen centuries. To heal that schism requires a superior power — the reconciling power of the cross.

The Jews in Jesus’ day were no different than today’s Sunnis who consider Shias to be second class Muslims. The Jews despised the Gentiles, like many “upper caste” Hindus still treat the “lower castes” as “untouchables”. However, the cross of Jesus Christ reconciled hostile communities. Paul the Apostle reminded Europe’s gentile believers how the cross of Christ had already freed them. The Jews used to call them “uncircumcised”, cut off from God’s grace, excluded from citizenship,

without hope and without God in the world. But now in Christ Jesus you who once were far away have been brought near by the blood of Christ. For he himself is our peace, who has made the two groups one and has destroyed the barrier, the dividing wall of hostility, by setting aside in his flesh the law with its commands and regulations. His purpose was to create in himself one new humanity out of the two, thus making peace, and in one body to reconcile both of them to God through the cross, by which he put to death their hostility. He came and preached peace to you who were far away and peace to those who were near. For through him we both have access to the Father by one Spirit.

Consequently, you are no longer foreigners and strangers, but fellow citizens with God’s people and also members of his household, built on the foundation of the apostles and prophets, with Christ Jesus himself as the chief cornerstone. In him the whole building is joined together and rises to become a holy temple in the Lord. And in him you too are being built together to become a dwelling in which God lives by his Spirit.