The Cross: The Power of Truth 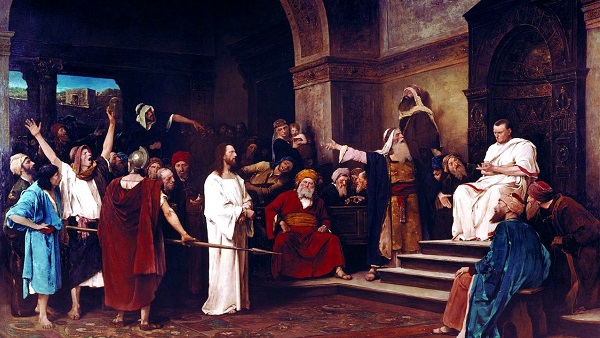 Christ before Pilate by Mihaly Munkacsy

The world has about 1.6 billion Muslims and only 14 million Jews. Yet, since 1901 only 3 Muslims have won Nobel Prizes in science and technology, compared to 140 Jews. Such uncomfortable facts prompted Dr. Rima Khalaf to investigate factors that hinder intellectual progress in the Muslim world.

Dr. Khalaf was the Director of the U.N. Development Program in the United Nations’ Arab regional office. She led an Arab-only team to study underdevelopment in 22 Arab countries. She submitted her bombshell report to the U.N. in 2002. Her team of Muslim scholars found that during the previous 1,000 years, the Arab world had only published the number of books that Spain currently publishes every year!

This UN report blamed the intellectual paralysis of the Arab world on factors such as the absence of political freedoms, the persecution of women, and isolation from the world of new ideas.

The report didn’t explore why Islam failed to institutionalize and sustain individual, intellectual, social and political freedoms. Nor did it search for the secret of the West’s liberating interest in exploring truth.

The Lord Jesus said that the truth will set you free (John 8:32). Islamic understanding of revelation made it difficult for Muslims to value truth above the sword, to make the pen mightier than the sword. Islam made the sword, not truth, the ultimate authority in Muslim cultures.

The emblem of the Muslim Brotherhood is the opposite of Harvard University’s motto VERITAS (latin for Truth). That is why Islam prohibits free inquiry. It’s sword enforces Qur’an’s authority. Harvard, with its pursuit of truth, has produced more Nobel Laureates than any other institution on the planet.

Postmodern secularism rejects Truth, which is a theological concept. The English phrase “Gospel Truth” is unique. For the Gospel of Jesus Christ is neither a philosophy in the Greek sense, nor a story as in Jung, Campbell or Hindu sense of mythology. The Gospel is not a “revelation” as Prophet Muhammad claimed to have received. The Gospel is an eye-witness account of those who saw the Lord Jesus Christ arrested, tried, crucified, buried, and resurrected. The Apostle John ephasized that the Gospel was eye-witness account, not a story or a religious philosophy:

The Apostle Peter also affirmed that the Gospel he proclaimed was true truth. It was neither a private revelation to an individual, nor a story that he had invented:

For we did not follow cleverly devised stories when we told you about the coming of our Lord Jesus Christ in power, but we were eyewitnesses of his majesty. He received honor and glory from God the Father when the voice came to him from the Majestic Glory, saying, ‘This is my Son, whom I love; with him I am well pleased.’ We ourselves heard this voice that came from heaven when we were with him on the sacred mountain.

Paul concurred that the good news of Jesus was true testimony given by multiple eye-witnesses:

US President George W. Bush studied at Harvard. But having denied God the ability to reveal anything, Harvard had given up truth long before his time. Therefore it seems that no one taught his generation of students that the Bible’s concept of Truth (Veritas) was foundational to America’s liberty. Postmodern Harvard misled President Bush and his neocon advisors into thinking that replacing Iraq’s dictator with constitutional democracy would establish freedom.

The Bible employs various images to describe complex cultures of liberty and slavery. One imagery is that of two kingdoms, of God and of the devil. (Matthew 4) Another imagery is that of light and darkness (John 1, Col 1:13). God’s kingdom is built on truth, the other is a kingdom of deception (John 18: 36-38; Revelation 20:3,8). John declared the Lord Jesus to be “grace and truth” (John 1:17). The trial of Jesus best illustrates why freedom comes from truth, not from elections.

During Jesus’ trial, the Roman governor Pilate asked him:
“Are you the king of the Jews?” Jesus replied that he is king, but his kingdom is not like Pilate’s kingdom: he headed up God’s kingdom of truth. The trial convinced Pilate that Jesus was not guilty. He publicly announced his verdict: “Not-Guilty.” Yet, Pilate believed that he had the power to crucify the innocent and to release the guilty. Rome had given him no self-evident truth of Christ’s inalienable right to life and liberty. Rome’s beastly empire of the sword had authorized governors to use their diabolical power to ignore truth and crucify the Not-Guilty:

“You are a king, then!” said Pilate.
Jesus answered, “You say that I am a king. In fact, the reason I was born and came into the world is to testify to the truth. Everyone on the side of truth listens to me.”

“What is truth?” retorted Pilate. With this he went out again to the Jews gathered there and said, “I find no basis for a charge against him’. . . As soon as the chief priests and their officials saw him, they shouted, “Crucify! Crucify!” . . . When Pilate heard this, he was even more afraid, and he went back inside the palace. “Where do you come from?” he asked Jesus, but Jesus gave him no answer. “Do you refuse to speak to me?” Pilate said. “Don’t you realize I have power either to free you or to crucify you?” . . . Pilate tried to set Jesus free, but the Jewish leaders kept shouting, “If you let this man go, you are no friend of Caesar. Anyone who claims to be a king opposes Caesar.” Finally Pilate handed him over to them to be crucified. (John 18: 33- 19: 16)

Democracy did not set the West free. The cross did. For the cross is not an ideology, philosophy, or mythology, it is the truth of what actually happened. The Gospel-Truth requires judges to submit to the authority of truth. Crucifying an innocent person is a violation of the revealed truth of our God-given right to life.

The right to life has never been self-evident to Muslim cultures, because it is neither observable in nature, nor deducible from logic. The right was ordained by the One who commanded: “You shall not murder.” Our life is God’s gift to us, therefore, no one has the right to take it from us. (Exodus 20: 13) The Ten Commandments were not a private revelation to a prophet. Moses did not impose his story upon the community. The community witnessed God’s power in Egypt and the Red Sea, His presence at Sinai. It heard God give the Law. The stone tablets engraved by his “finger” confirmed the truth revealed by God.