Kingship of All Believers: How the Bible Created Modern Political Freedom 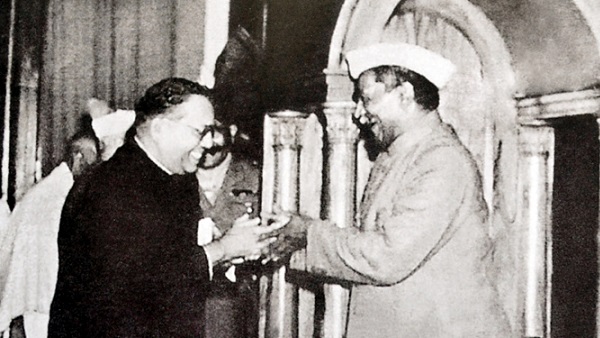 Dr. Babasaheb Ambedkar, chairman of the Drafting Committee, presenting the final draft of the Indian Constitution to Dr. Rajendra Prasad on 25 November, 1949.

Then God said, “Let us make man in our image, after our likeness. And let them have dominion over the fish of the sea and over the birds of the heavens and over the livestock and over all the earth and over every creeping thing that creeps on the earth.”

“So God created man in his own image,
in the image of God he created him;
male and female he created them.
“And God blessed them. And God said to them, “Be fruitful and multiply and fill the earth and subdue it, and have dominion over the fish of the sea and over the birds of the heavens and over every living thing that moves on the earth.”

When we sinned, we lost much of God-given kingdom as well. The Saviour came to restore to us God’s kingdom:

“And from Jesus Christ, who is . . . the ruler of the kings of the earth. Unto him that loved us, and washed us from our sins in his own blood, And hath made us kings and priests unto God and his Father; to him be glory and dominion for ever and ever. Amen.”

“Thou art worthy to take the book, and to open the seals thereof: for thou wast slain, and hast redeemed us to God by thy blood . . .” And hast made us unto our God kings and priests: and we shall reign on the earth.”

The Lord Jesus had explained the purpose of salvation to his disciples,
Luke 12: 32

“Fear not, little flock; for it is your Father’s good pleasure to give you the kingdom.”

‘Jesus said to them, “Truly I tell you, at the renewal of all things, when the Son of Man sits on his glorious throne, you who have followed me will also sit on twelve thrones, judging the twelve tribes of Israel.”

Paul prayed for the Christians in Ephesus that their eyes may be opened to see God’s great purpose in saving them . . .

I pray that the eyes of your heart may be enlightened in order that you may know the hope to which he has called you . . . and his incomparably great power for us who believe. That power is the same as the mighty strength he exerted when he raised Christ from the dead and seated him at his right hand in the heavenly realms, far above all rule and authority, power and dominion, and every name that is invoked, not only in the present age but also in the one to come. And God placed all things under his feet and appointed him to be head over everything for the church, which is his body, the fullness of him who fills everything in every way.
“As for you, you were dead in your transgressions and sins, . . . But because of his great love for us, God, who is rich in mercy, made us alive with Christ . . . And God raised us up with Christ and seated us with him in the heavenly realms in Christ Jesus”

In passages such as the above, Paul is simply saying what the Lord Jesus himself says. . .

“To the one who is victorious and does my will to the end, I will give authority over the nations— that one ‘will rule them with an iron scepter and will dash them to pieces like pottery’—just as I have received authority from my Father.”

“Here I am! I stand at the door and knock. If anyone hears my voice and opens the door, I will come in and eat with that person, and they with me. To the one who is victorious, I will give the right to sit with me on my throne, just as I was victorious and sat down with my Father on his throne.”

Apostle Peter summed it all up in his memorable phrase that Christ’s purpose in saving sinners is to make them a Royal Priesthood . . .

“But you are a chosen people, a royal priesthood, a holy nation, God’s special possession, that you may declare the praises of him who called you out of darkness into his wonderful light.”

Ancient and Medieval Bible students have always known the texts quoted above. The modern world of human equality, liberty, universal education, and popular sovereignty was born because the Sixteenth century Protestant Reformation began to apply these truths. In his political manifesto, “An Open Letter to The Christian Nobility of the German Nation Concerning the Reform of the Christian Estate, 1520” Martin Luther championed the practical implications of the New Testament’s doctrine of “Priesthood of all believers.” We will examine the transforming power of that truth in another post. For now it is enough to note that even the BJP, the militant Hindu party, that has ruled Madhya Pradesh since 2004, has started training students from all castes to become priests . . .albeit to worship idols.

Beginning with 1574, the French Calvinists, called the Huguenots, began to draw Europe’s attention to the doctrine of the kingship of all believers. They grasped that the Old Testament fills pages to tell us about the horrible, tyrannical rule of Jewish kings so that we may learn (a) how not to govern our nations, and (b) how God wants us to build free and just governments. In “The Book That Made Your World: How the Bible Created the Soul of Western Civilization,” I have explained how the study of the Bible by Francois Hotman, Theodore Beza, and Philippe du Plassis Morney laid the foundation of modern political theories. Christian Political thinkers such as Samuel Rutherford and John Locke as well as secularized political thinkers such as Thomas Hobbes and Jean Jaques Rousseau built upon these Bible Scholars or plagiarized some of Bible’s ideas.

It is not necessary to review the Huguenot’s exposition of the Bible, especially the Old Testament, here. It is enough to say that the transformative impact of the Bible was felt first in Scotland through reformers such as John Knox who studied with Beza in Geneva, under John Calvin. After reforming the Church, the Scottish reformers went on to apply the Bible to reform the Parliament. They overthrew corrupt monarchy. They did not call their system “democracy.” Reformers such as Knox and Melville were seeking God’s kingdom — the New Jerusalem — envisioned in Isaiah and Revelation. This political system based on the doctrine of the kingship of all believers, was called “Popular Sovereignty” by their older and scholarly contemporary, George Buchanan. He became a Calvinist in 1555. Later Scottish thinkers, labeled their Bible-inspired system, “Democracy”. That label has stuck, although the Bible’s doctrine of the kingship of all believers is still used as “Popular Sovereignty.”

Kings and emperors created nations in most of human history. Thanks to the historic impact of the Bible’s doctrine of the Kingship of All Believers, the United States of America became one of the first nations created by “We, the People.”

My nation of India followed the Bible in this regard. In adopting our Constitution, our Constituent Assembly declared . . .
“WE, THE PEOPLE OF INDIA, having solemnly resolved to constitute India into a SOVEREIGN DEMOCRATIC REPUBLIC and to secure to all its citizens:
JUSTICE, social, economic and political;
LIBERTY of thought, expression, belief, faith and worship;
EQUALITY of status and of opportunity; and to promote among them all FRATERNITY assuring the dignity of the individual and the unity and integrity of the Nation;
IN OUR CONSTITUENT ASSEMBLY this twenty-sixth day of November, 1949, do HEREBY ADOPT, ENACT AND GIVE TO OURSELVES THIS CONSTITUTION. . .”