Are We About to Repeat the Same Mistake that Resulted in the Noahic Flood? 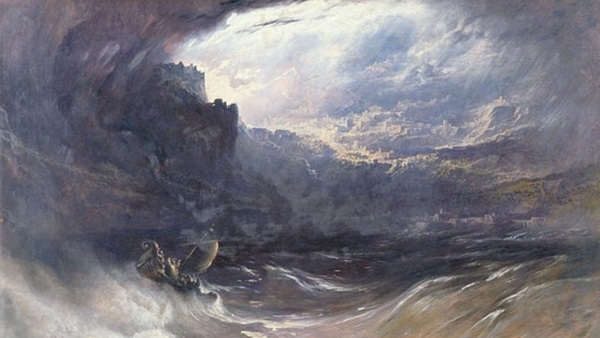 The Deluge by John Martin.

Scientists recently genetically edited viable human embryos to fix a genetic defect that can cause sudden cardiac death, according to a front page Wall Street Journal article in early August of this year.

While welcome news for those suffering from genetic disorders, the newest breakthrough from the gene manipulators should be cause for deep reflection.  But there has been barely a ripple of notice.

The lack of intense public discussion about the incredibly rapid advances in gene manipulation is baffling.

About 15 years ago, there was huge cultural and political controversy over the nascent embryonic stem cell technology.  The stakes then were not nearly as high as they are now yet there is but a fraction of the amount of debate as there was then.

Since then scientists have made amazing advances, most notably with “Crispr”, a gene altering technique that is accurate, clean and extremely powerful.  In addition, it is so simple that almost anyone can use it.

Hobby kits sell for as little as a few hundred dollars.  For a few hundred bucks more you can take a class on how to use it.  While most of us wouldn’t be able to create a Frankenstein, knowledgeable researchers have already knocked out “bad” genes in plant species and now replaced miscreant genes in humans with benign replacements.

According to Wesley J. Smith in his article “Brave New World is Closer than You Think” (Winter 2017 issue of Human Life Review) a few years ago, scientists cloned humans for the first time using a technology known as SCNT or, somatic cell nuclear transfer.  They cloned four human embryos and maintained them up through the blastocyst stage – the very stage at which they can be implanted and then gestated to birth!

Again, there was barely a whisper of public discussion regarding the ethical implications, not only of the technology itself but of creating and destroying of four human lives in the laboratory.

There will be almost unstoppable pressure to use these (and other) technologies to alleviate suffering, cure genetically induced diseases and alter plants, animals and even humans for the “better”.

But they can also be used to create human/animal chimeras, “manufacture” body parts for human use from embryos gestated just for that purpose, genetically engineer embryos to obtain “super-human” capabilities and the outright creation of cloned human beings.

Even scarier is the goal of some, like the transhumanists, who intend to use the new technology to re-engineer the human genome.  Their intention is the radical redesigning of what it means to be human.

Those in the know are unashamed and very willing to take control of the direction of future human development.  They not only have intense belief in evolution, they believe they can manipulate its direction and that they are even called to do so.

These scientists are no longer content to be god-like; they are certain they can become gods themselves, creating new and better humans to replace the “faulty” ones God created.

Will they decide that the best future human is a bio-computer contraption or maybe half-cyborg?

And what does God think of all this?  Maybe Jasher 4:18-19 gives us a hint as it explains why God sent the Noahic flood:

18 And their judges and rulers went to the daughters of men and took their wives by force from their husbands according to their choice, and the sons of men in those days took from the cattle of the earth, the beasts of the field and the fowls of the air, and taught the mixture of animals of one species with the other, in order therewith to provoke the Lord; and God saw the whole earth and it was corrupt, for all flesh had corrupted its ways upon earth, all men and all animals.

19 And the Lord said, I will blot out man that I created from the face of the earth, yea from man to the birds of the air, together with cattle and beasts that are in the field for I repent that I made them.

If we pay attention to history, we can plainly see that all our past projects to perfect humanity have fallen flat on their faces.  While aiming for perfection we always seem to only get results that are anti-human, anti-life, anti-beautiful and anti-good.

Take abortion, for instance.  Originally just a simple project to make life better for those people who only wanted to have a little fun without facing the natural human consequences of their actions.  What could go wrong with this picture?

Not much, just over 50 million dead in the U.S.A. alone.  While the worldwide blood bath of over one billion babies sacrificed on the altar of hedonism makes all of history’s wars look like child’s play in comparison.

As Robert Hart points out in “Known Trespassing” (May-June 2017 issue of Touchstone Magazine), this is only possible because hundreds of millions of women have come to believe that they possess property rights over their babies that allow them to murder their own child EVEN WHILE thinking that slavery is unjust because no one has property rights over another.

Hart considers this a prime example of Orwell’s “double-think” from his classic “Nineteen Eighty-Four”, a novel poignantly pertinent to this discussion.

Or consider assisted suicide, supposedly put into practice to lend dignity to dying.  Yet many are being forced to feel that they are a burden, not wanted and in the way.  When used to cull the vulnerable and aged from our midst to make room for the more vigorous and fit this scheme is just another take on man’s attempt to perfect society that results not in a better society but in a more bloody one.

While refusing to call it by its rightful name, the world readily acknowledges the fact of original sin.  It admits man is just not right, guilty of sundry sins and, on the individual level, incapable of self-perfection.  Yet it refuses to acknowledge the only true solution offered for man’s salvation.

Hence, hating the truth, man is left to craft his own solutions.  The scientific project to perfect man necessitates that man himself become god, recreating man into something no longer just human but something better, consequently anti-human.

The idea of test tube babies was fantastical at the time Aldous Huxley penned “Brave New World” in the ‘30s.  Yet the imminent facticity of that reality is now upon us, with barely a murmur of interest from the politicians, the Church or the public.

At the same time there is little concern about genetically modifying OUR OWN and our future progeny’s genes.  Maybe the future-engineered “humans” will be a little more consistent and logical…?