You Say You Would Have Been Anti-Slavery? Then Answer This Question 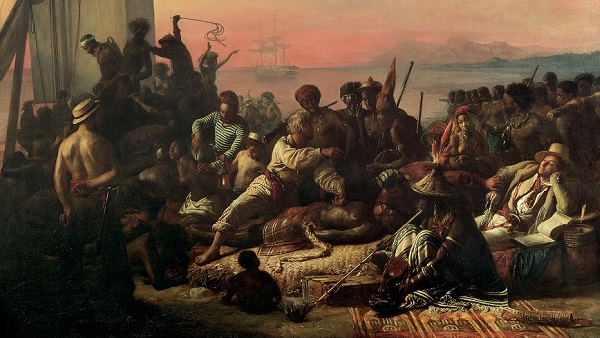 Slaves on the West Coast of Africa, c.1833 (oil on canvas) by Biard, Francois Auguste.

Undergraduates say the darndest things. When discussing the history of racial injustice, I frequently ask them what their position on slavery would have been had they been white and living in the South before abolition. Guess what? They all would have been abolitionists! They all would have bravely spoken out against slavery, and worked tirelessly in the cause of freeing those enslaved. Isn’t that special? Bless the…ir hearts.

Of course, it is complete nonsense. Only the tiniest fraction of them, or of any of us, would have spoken up against slavery or lifted a finger to free the slaves. Most of them—and us—would simply have gone along. Many would have supported the slave system and, if it was in their interest, participated in it as buyers and owners or sellers of slaves.

So I respond to the students’ assurances that they would have been vocal opponents of slavery by saying that I will credit their claims if they can show me evidence of the following: that in leading their lives today they have embraced causes that are unpopular among their peers and stood up for the rights of victims of injustice whose very humanity is denied, and where they have done so knowing (1) that it would make THEM unpopular with their peers, (2) that they would be loathed and ridiculed by wealthy, powerful, and influential individuals and institutions in our society; (3) that it would cost them friendships and cause them to be abandoned and even denounced by many of their friends, (4) that they would be called nasty names, and (5) that they would possibly even be denied valuable educational and professional opportunities as a result of their moral witness.

In short, my challenge to them is to show me where they have at significant risk to themselves and their futures stood up for a cause that is unpopular in elite sectors of our culture today.