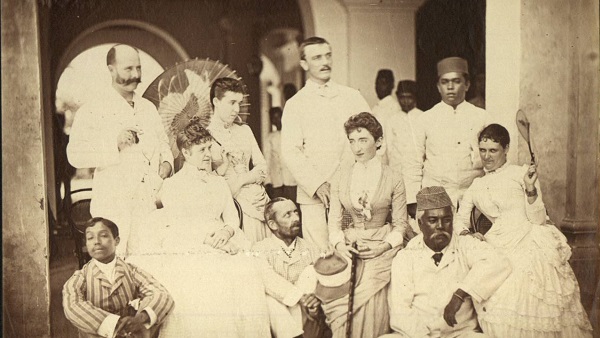 British men and women in India during the Raj.

I have been invited to present to the Members of Parliament in London the case for the Bible as The Book that Made Your World. This is fitting since the Bible is the greatest gift that the British gave to India.

It is also a wonderful way to celebrate the 500th anniversary of the Reformation that gave us Tyndale’s English New Testament and transformed medieval nations into modern Great Britain.

Majority of the Bible translations happened in Calcutta, after 1800, in the Fort William College. Three days a week Carey helped train civil servants in that college. The Bible became the book that transformed the corrupt administration of the British East India Company into the honest “steel frame” of clean governance.

The Bible taught us that India should not be divided into petty, quarrelling kingdoms such as Israel and Judah; nor united under empires such as Mogul, Maratha, Sikh or British. God desired India to be a nation, a free nation, and a great nation, ruled not by sinful men, but by laws reflecting divine justice and righteousness.

It was through the Bible that we learnt that God did not want us make up our own gods or worship creation — natural or demonic. He commands us to seek Truth and worship God in spirit and in truth.

The Bible brought to India that idea of human equality that is unleashing the potential of every individual. It taught us that everyone — male and female — is created with the dignity of God’s likeness. The Bible revealed to us a secret of building great nations: strong families where a man has only one wife, and fathers his children like our Father in heaven.

Thanks to hardworking, Bible-driven visionaries such as William Carey, Sam Higginbottom, and Norman Borlaug, India — a land of famines — is now a land flowing with milk and honey. It is the world’s largest producer of milk and exports food and fruit.

Independent India acknowledged its profound intellectual, moral, social and political debt to Great Britain when it chose to govern itself not through Rajas and Maharajas, Sultans and Badshahs, but with Westminster style Parliament.

Why did British Parliament became a model for our nation?

Britain’s parliamentary governance did not come from Greek democratic states such as Athens. Greek city-state did not have parliaments. The British system developed because the Bible taught that God’s kingdom is managed by Elders (Revelation 4:4 etc.).

Why do citizens elect Britain’s rulers? Great Britain adopted “Popular Sovereignty” as its model because Moses commanded the liberated slaves to choose their own leaders (Deuteronomy 1: 9-18).

Why does the Prime Minister have greater power than the Monarch? India’s first Prime Minister, Pandit Jawaharlal Nehru, taught us Britain’s secret. He was India’s ‘First Servant’ he said, because that is what the title “Prime Minister” literally meant. This radical political idea began when the King of kings and the Lord of lords washed the feet of his disciples. He taught them that rulers lord it over their people in cultures that do not know God. He, the Messiah, had come to inaugurate a new kingdom in which rulers will become servants: For he came not to be served but to serve and to give his life for salvation of many.

British Parliament became a model for India because Christian Members of Parliament, such as William Wilberforce, made it the conscience of the nation. When he became an MP, the Parliament was a gentlemen’s club. It served the interest of the club members. MPs resisted abolishing slave trade for two decades because they were the beneficiaries of that lucrative, reprehensible, trade.

British Parliament became a model for many nations because the Bible transformed it. It will be my honor to reintroduce to some of the current MPs, “The Book That Made Your World.”

This important assignment needs your prayers . . . and your help. The organisers would like to give a copy of the book to MPs along with the formal invitation. I need £3,500 for the books. Please consider donating online www.RevelationMovement.com