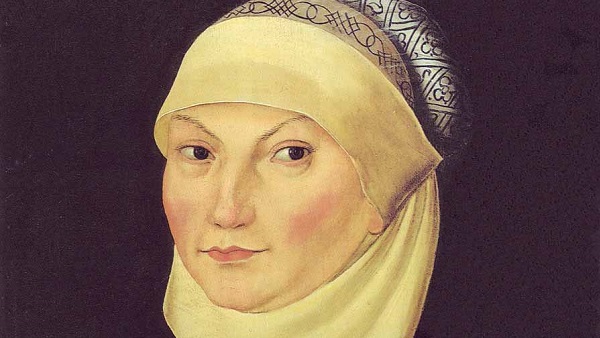 Five hundred years ago my country, India, had more wealth than Europe. Then came a dramatic change. Some European countries began to develop faster than the rest of the world.

It is tempting to credit the West’s success to greed and guns, germs and steel. For these did play a role. A responsible analysis, however, would look at Katherine von Bora — a runaway nun who married a monk, Martin Luther. She began the change that Sociologist Max Weber discussed in his classic, “Protestant Ethic and the Spirit of Capitalism.”

Prior to this nun’s marriage, the Medieval Europe exalted celibacy and virginity, not marriage and family. Europe’s religiosity honored asceticism over enterprise. Katherine, who became Mrs Martin Luther, changed that. She played a key role in creating the new world that respects marriage, commercial enterprise, and economic success.

The newly married nun and the monk had no money to buy a house. Her husband, a priest doubled up as a professor in the small university of Wittenberg. The German town had about 2,500 people. The local Prince, Fredrick the Wise, was the university’s patron. He gave the empty monastery to Martin and Katie Luther. For he agreed with Luther’s study of the Bible that marriage was God’s sacred gift to human beings. Living in a large house created a problem: How was Katie to maintain it on her husband’s salary of a couple of hundred gulden a year?

Katie turned her home into a paying guest-house for boys, studying in the university. That required her to feed 30-40 people everyday. These included international guests, who came to meet Dr. Martin Luther.

How do you feed so many people?

Katie became a gardener — growing her own fruit and vegetables. Then she went on to turn her home into an animal farm. Her’s was the second home in town, permitted to keep goats: for she learnt how to manage her household’s man-power to keep her animals from destroying neighbors’ gardens.

Katie saved some money and invested it in buying second, third, fourth, and then the fifth parcels of land. A creek flowed through one of the lands that she bought. Katie turned it into a fish-pond!

By 1542, the Luthers owned more real-estate in Wittenberg than any other citizen. Katie practiced the Bible’s work-ethic that Luther talked about. Max Weber described that work-ethic as the most important factor behind modern economic progress.

Back then, cities did not provide clean drinking water. The goats and the cows did not yield the quantity of the milk that they now give. Therefore, the milk was primarily for the sick in Katie’s large household. In order to provide safe drinks to her large household, Katie ran a brewery. One can still buy “Luther Beer” in Wittenberg’s tourist market.

As soon as Katie bought a plot of land, she began developing it. Every farm needed buildings for agriculture as well as housing for her employees. Therefore, Katie spent her married life supervising building construction. She mastered Planning, Buying, Managing, Negotiating, and Accounting.

Had Martin Luther followed the Buddha as his guru, he would have remained a religious ascetic, begging for his food. But Luther followed the Bible. It taught that God was a worker, not a meditator. God created this wonderful world and made man creative like Him. God required Adam and Eve to look after the garden and the earth. Later, after liberating Jews from slavery, God commanded them to work for six days diligently and rest on the seventh.

The Bible condemned laziness as sin. Therefore, Apostle Paul left his pupil, Titus, in the island of Crete to transform their culture. Crete lived out Consumerism. They were known as “lazy gluttons,” (Titus 1:12) for they coveted more than they needed. They did not work for what they consumed. Paul asked Titus to appoint Elders in Crete, who will model “good work” and teach believers to work hard and produce enough to bless those who were in need.

Martin and Katie Luther understood God’s Ten Commandments. The tenth commandment, “You shall not covet” meant that people must create wealth. A person who was given five talents must multiply them into ten.

The eighth commandment, “You shall not steal” meant that every person had a fundamental right to the property that he inherited or created. While the state was responsible to protect a citizen’s property, the family, church and the school were responsible to produce citizens that would not steal a neighbor’s fruit, vegetable, animals or other goods. Nor should an employee steal the milk, the eggs, the fruit, vegetables, or fish that belonged to their employer.

I grew up in North India. The land and the climate were perfect for all kinds of fruit, vegetables, milk, eggs, and fish. These agro-products, in turn, could have created vibrant agro-industries. Average peasant did not grow fruit and vegetables because it was virtually impossible to protect his produce. Upper caste men would come to his farm in broad day light to help themselves to his produce. If he left his wife to protect his farm, she would be raped. In spite of such hardships, toiling Indians did produce wealth. The tragedy was that our caste-system, in a culture without the Ten Commandments, prevented my people from enjoying the fruit of their labor. During the 20th Century, atheism governed Soviet Union’s Communist Empire. Atheism did not believe that God had commanded, “You shall not steal.” So it did not respect private property. Russia’s atheist dictator. Stalin, took over citizen’s agricultural land because atheism gives the State absolute power over citizens. Katie would have had no motivation to buy lands and develop them in an atheistic culture.

Absence of Ten Commandments created additional problems in India. Our people worshipped the cows, the land, and the rivers. That robbed them of the right to establish their dominion over nature. Our culture that gave people the freedom to covet and steal, robbed citizens of the motivation to produce more. Katie’s entrepreneurial abilities succeeded because the Bible created a different moral and philosophical culture.

Economics has become an extremely complicated subject now. Therefore, it is difficult for many well-trained economists to understand a simple secret of the West’s economic success. That secret was a woman — Mrs. Katherine Luther. She did much more than feed a few dozen students. Every single day, Katie helped her husband disciple Germany’s future spiritual leaders. She transmitted to German pastors the Bible’s spirit of economic enterprise. That is the art of making money with whatever little you have.

Katie exhibited the art of managing money, saving money, investing savings, managing people and property to multiply talents. After eating dinner at her table, the boys would often sit with her husband, Dr. Martin Luther. They will ask questions and note down his answers. Katie’s household was producing more than food. It was shaping Germany’s future intellectual and spiritual leaders. Centuries later, scholars such as Max Weber would continue to read the notes the boys took and published as Martin Luther’s Table Talks. Those informal, post-dinner discussions applied the Bible to everyday life, including the economic life of ordinary families.

It was through those young men, discipled in Katie and Martin Luther’s home, that the Bible transformed national economies.