Capitalism Creates Psychos According to Professor 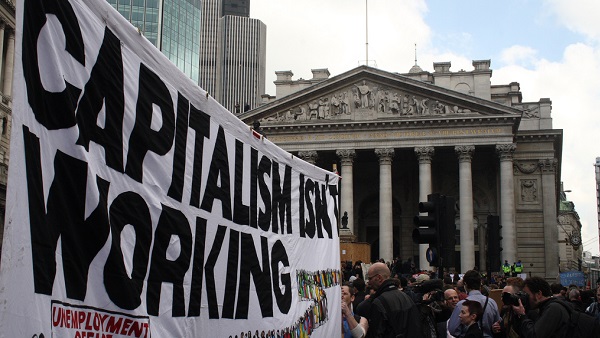 Socialists continually flail stuffed monster versions of capitalism they have sewn together from pieces of their fevered imaginations. Usually I just ignore them because their versions of reality are irrational and I don’t want to be the greater fool who debates with a fool. But a recent assault on capitalism caught my attention because it came from the University of Chicago, Hayek’s old haunt.

John Rollert, an adjunct assistant professor of behavioral science at Chicago Booth and in-house ethicist, wrote “The savage ethics of ‘American Psycho’” for the Booth School of Business blog. Now it’s hard enough to get the average US citizen to watch a Youtube video on economics, let alone read a book. When they do, they often come across nonsense such as this from Rollert:

“Twenty-five years after it was first published, American Psycho is now a canonical work of social satire, widely regarded by gender theorists and feminist critics [just the people we want teaching ethics] alike as a scabrous assessment of modern masculinity run amok.

“American Psycho also remains, to my mind, the single most damning critique of the cultural consequences of contemporary capitalism. By drawing a parallel between the ritualistic displays of domination on Wall Street and the predations of an actual psychopath, Ellis not only shows how soft sadism shades into truly violent behavior, he suggests that the peculiar customs of the commercial elite can blind us to the difference…
To demonstrate your superiority was the motivating force of modern capitalism, and the opportunities that provided for it might be sportive in nature or something more ominous.

“Ultimately, the act of murder is merely an exercise in the most self-indulgent display of all, savage dominance, and if it steadily becomes more elaborate and ornate (which it notoriously does), that is because, like ambition, the thrill lies not in the act itself but in the knowledge that it doesn’t suffer by comparison.”

“The celebration of unabashed sadism in service of superiority and personal success, a spirit that contemporary capitalism seems to tolerate and even abet, is what unites the two books, and one might be forgiven for wondering the degree to which it has contaminated the broader culture…

“The enduring significance of American Psycho is not that it demonstrates the obvious, namely that between the casual cruelty of the Salomon trading floor and the extravagant barbarity of Patrick Bateman there is a point at which the sadism stops being funny. (This should be clear, and clearly felt, to anyone who is not an actual psycho.) The achievement is simpler and more straightforward, and ultimately sharp as a stiletto. To ask, as a matter of moral reckoning: Between the two, what’s the difference?”

So in professor Rollert’s fever induced imagination, capitalism is all about dominance that leads to abusive financial behavior and eventually murder. And everyone applauds it. Of course being a socialist, Rollert believes that people are born good and turn evil only out of oppression. The state can prevent that through public education, business regulation and property elimination. Apparently, the fact that property still exists in the US is sufficient oppression to drive the men of the novel to the worst imaginable evils and Rollert to nightmares.

But Rollert should know that Marx, his mentor, insisted that capitalism didn’t appear until at the earliest the 16th century. His timing was accurate but his causes were absurd. Taking Rollert’s guru at face value, how do socialists account for evil before the 16th century? After all, when Spain tried to reduce the Netherlands to trees and rocks in the king’s effort to cleanse his kingdom of Protestants, his troops would murder every man, woman and child left in vanquished towns, but only after abusing the women so violently that they begged to die.

Capitalism is the root of all evil to socialists like Rollert, but they have a hard time explaining evil before capitalism. When Tamerlane was building his pyramids of skulls in the Central Asia, was it capitalism that inspired his mass murder and cruelty? Hitler was a socialist, BTW. And what drove the socialists Stalin and Mao to murder 30 million each of their fellow citizens? Socialists cannot make the actions of capitalism as evil as the best socialists even with the help of LSD.

The Christian view of human nature says that people are not born innocent, but have an inherent tendency toward evil. We choose to be good or evil. The behavior of the young men in Psycho and Liar’s Poker comes from their choices to commit evil. No one made them do it, not the devil as Flip Wilson used to plead, and least of all capitalism. People make the system; they system does not make the people.

Psycho is not art and neither is a “canonical work of social satire.” Instead, it reflects the destruction of  moral values caused by society’s rejection of the Christian God. Russell Kirk wrote in Eliot and His Age: T.S. Eliot’s Moral Imagination in the Twentieth Century that an anti-Christian culture such as ours will produce a new kind of literature:

“One powerful form of this new literature, as Maritain had suggested, is the diabolical. Since Eliot wrote, the literature of abnormity has become a major branch of publishing.That is what happens to literature when it is severed from the moral imagination and from religious understanding. Eliot wrote repeatedly: the writer discovers the perverse.”

That prophecy of Eliot has come true in the mass production of novels and motion pictures that entice viewers to participate in the worst kind of evils from the safety of their Lazy Boy recliners. Keep in mind that among the earliest socialists were the Marquis de Sade, Charles Fourier and Georges Sorel. One of their main goals was to raze the ground of traditional morals to prepare for the socialist utopia. Christianity, property and morality had to go so the socialists could fabricate new religions and morality from scratch using only their own lusts as guides. Everyone knows about the sexual perversity of de Sade. According to the Wikipedia article on Fourier, he…

“…saw that “traditional” marriage could potentially hurt woman’s rights as human beings and thus never married…Fourier held that both men and women have a wide range of sexual needs and preferences which may change throughout their lives, including same-sex sexuality and androgénité. He argued that all sexual expressions should be enjoyed as long as people are not abused, and that ‘affirming one’s difference’ can actually enhance social integration.”

Sorel promoted senseless violence and destruction. If humans do not have free will and the economic system they live with causes them to be good or evil, Rollert has collared the wrong culprit. The evil of the characters is American Psycho and Liar’s Poker point to socialism as the most likely parent because socialists have always promoted sexual deviancy and violence.

But if we have a choice, as Christianity and capitalism teach, then those same characters offer proof of the ancient Christian doctrine of original sin. Mises wrote on many occasions that freedom and the division of labor generate cooperation, peace and civilization. And Hayek wrote “Individualism: True and False,” that Christian individualism promoted respect for traditional morality.

The only real psychos are socialists.