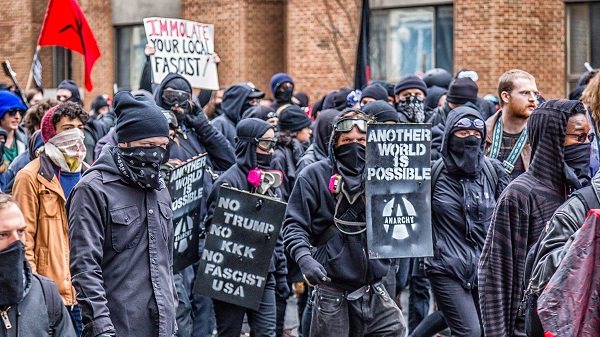 When the Soviet Union broke up the many Americans who supported the regime, or were at least sympathetic to its goals, did not just disappear off the face of the earth. Instead, they burrowed into federal agencies, the arts, and especially education, where they softened their tone a bit and called themselves Progressives, but they continued to advance the Marxist agenda in every way possible. That agenda is every bit as anti-Capitalist (and therefore, anti-American) today as it was in the Soviet heyday. A generation later we are seeing the fruits of these labors.

Too many of my conservative/traditionalist friends shake their heads in disbelief about the state of discourse in the country these days, especially on the campuses. It all seems so outlandish that it is almost comical. They are making a big mistake if they dismiss it.

My friends comfort themselves with bromides like, “Just wait ‘till these college kids get out in the real world. Then they’ll find out what‘s expected of them.” These college kids have already been getting out in the real world for some twenty years and they are transforming corporate America. Twenty years ago they may have found jobs mostly in education, non-profit organizations, government agencies, and the like, but with each new cohort they widen their reach. Now they populate corporate HR departments, diversity offices, and corporate responsibility projects. In these positions they can determine how companies donate money and organize diversity training for people in other areas of the company. This is why the Media Matters campaigns for advertisers to boycott conservative news outlets have been successful, and why efforts to punish states like Indiana and North Carolina for adopting politically incorrect policies have worked so well.

Controlling education means controlling knowledge. Older people fondly remember an America that valued virtues such as patriotism, thrift, honesty, self-sacrifice, and the principles enshrined in the Declaration and the Constitution. People coming out of school these days have no memory of any of that. They have been taught that America was founded on slavery, the genocide of Native Americans, and the oppression of women. There is nothing noble about our history. They have been taught that their own family members are bigoted and old fashioned, so can’t be trusted.

This historical amnesia is no accident. Erasing the values that unite a country is an essential step in bringing the country down. This is particularly true for a country like the United States that is founded on and unified only by a set of beliefs, not on accidents of geography or ethnicity. It is often said we are a nation of immigrants, and that is absolutely true. The only thing that binds us together is a belief in self-governance through the mechanism of a Constitutional Republic. Immigrants become Americans by taking this oath –

The Marxist teachers and professors have succeeded in erasing this memory, as Joy Pullman illustrates in The Federalist. I would be surprised if even ten percent of today’s college students would take this oath that is required of every new citizen. That means they are wandering in the wilderness, without any foundation or anchor. Being American means nothing to them other than an accident of birth, so going forward, being American can be whatever they feel like at the moment. This breeds chaos.

It also breeds movements like Antifa that thrive on chaos. Many people are puzzled that Antifa describes itself as both Communist and Anarchist. Communists want government in complete control of all economic activity while Anarchists want to abolish government. How can they be joined together? It’s not that hard, as we saw during the Russian Revolution. First push anarchy as a way of dissolving all order and civic associations, then the masses will call for the restoration of order and the Communists step in, as the Bolsheviks did in 1917. Granted that not many of the participants of Antifa understand this vision. They are angry hoodlums who simply like to fight and destroy things. But behind them are people who are not angry, but calculating. These people have studied the history of revolutions and know exactly what they are doing.

This study applies also to the current love of “identity politics.” The Marxists long ago gave up on the original vision of mobilizing oppressed workers to rise up against Capitalism to establish a “dictatorship of the proletariat.” “Workers of the world, unite!” is passé. Blue collar workers have become the new bourgeois. They may not be content, but not because they are oppressed by the bosses. If anything they are aligned with the bosses and want to get a good job, live in a nice neighborhood, raise their families, go to church, and be responsible citizens.

No, the search for discontent now comes in other forms. For a while it took the form of anti-colonialism in the third world (see Barack Obama’s father). But that, too, has faded as former colonized countries have learned the only path to prosperity lies in embracing capitalism.

Today, especially in the United States, the Marxists look for other aggrieved segments of society to exploit. The most obvious segment is African-Americans, who have legitimate complaints about how they have been treated over many years. It’s not just slavery and Jim Crow laws in the South. Some of the worst racism in America has been in the Northern cities to which Southern blacks fled to escape state-sanctioned segregation. But take notice that the face of black activism today is not coming from the ghettoes, but from college campuses. Our Marxist professors weren’t about to go into the inner city to organize blacks — they waited for the blacks to come to them in the form of affirmative action admissions and other college diversity programs. Besides, most of the African Americans in the cities are not much interested in revolution. Like their blue-collar brethren, they are far more interested in getting a good job and living in a safe community. They are also very religious and have a high regard for traditional values, even when circumstances make it hard to live these out.

But African-Americans comprise only 13 percent of the population, hardly enough for a “mass movement.” So, we have to add other segments. Latin Americans might be a good bet. They are more likely to be poor, and immigrants, legal or not, haven’t yet acculturated into the American ethos. As it turns out the pickings here are pretty slim. Sure, there is a portion that is ready to be radicalized, but far more came to this country looking for opportunity. They, too, are quite religious and place a very high value on family and self-sufficiency. It is possible to rile some up by exploiting their fears of deportation, but at only 17 – 18 percent of the population we still don’t have a mass movement.

Another aggrieved minority may be Muslim Americans. That hasn’t always been true, but since 9-11 they have felt vulnerable to a potential anti-Muslim backlash. The strongest proponents for a robust military response to Islamic terrorism have been conservatives, especially neo-cons who also are often Jewish. Many Muslim Americans fear that they will be collateral damage in the War on Terrorism. But again, the population here is small, comprising only one percent of the U.S. in 2015, according to Pew..

So, let’s add in women. One might think this wouldn’t work very well, because women have never had it better in this country or any other. Women are far more likely to be enrolled in college than men are (43 percent of women age 18 to 24 were in college in 2005, compared to only 35 percent of men). Women today have very few constraints on their behavior or their aspirations. But create myths about wage gaps and rape epidemics, and add in examples of boorish male behavior, and maybe we can create enough anxiety to get them stirred up, too.

Now, let’s top it off with the gay “community.” These folks certainly don’t have much affinity for “traditional American values” even though they are doing pretty well economically. They don’t comprise a very large population, under 5 percent according to Gallup, but they are already very well organized and activated and hold positions of influence throughout the culture.

Throw in the usual artists and intellectuals, who, from Paris to Buenos Aires have always hopped on to the latest Leftist bandwagon rolling down the street, and there you have it —  the great new Marxist coalition that is behind so much of the political turmoil.

You may notice some problems here. First, none of these groups have much to gain from socialism. Their aspirations are much more likely to be realized through robust participation in a capitalist economy.

More importantly, these groups don’t actually have much in common. In fact, quite the opposite. The “liberation” advanced by the LGTB people clashes rather starkly with the traditional values of the blacks and Latinos. Blacks actually feel threatened by new immigrants taking their jobs. There is a whole lot of tension, and even violence, between black and Latino gangs.  Women fought hard for equal treatment through laws like Title IX, which ensure funding for women’s sports, but the transgendered movement is threatening the whole idea of “women’s” sports. And obviously Muslims are greatly at odds with many of the goals of other elements, including gay rights and abortion.

This grand coalition is more likely to splinter apart than stay united. Therefore, our Marxist professors have coined a clumsy new term – “intersectionality” – to try to keep people working together. Back in the Workers of the World days this was known by the far more inspiring term of “solidarity.” The general idea is that we may not like each other very much, but we all have a common enemy – the white male oppressor. Let’s work on beating him down, and then we can sort out these other concerns.

Of course that is when the real war starts. Which little subgroup will be in power? We have seen this play out before. After the Bolshevik revolution in Russia there was enormous conflict between the Leninists and the Trotskyites, and a bloodbath against all “counter revolutionaries.” The same may happen here – if it ever gets that far.

More likely this whole thing will peter out as the economy and the culture accedes to some of the more reasonable demands and the outrage machine exhausts itself. Plus, Donald Trump may actually succeed in his goals of better jobs and safer streets. Despite the yearnings of the Marxists, capitalism is not the problem, it is the solution. But that prediction is no basis for complacency. If we don’t teach our children what the American experiment is all about, who will? Certainly not their “educators.”

Greg Scandlen has over 30 years experience in health care financing. He is an advocate of patient empowerment, consumer choice, and increased competition. As founder of the Council for Affordable Health Insurance in 1991 and Consumers for Health Care Choices in 2004, he helped get Health Savings Accounts enacted and implemented. He is now retired and living in Waynesboro, PA where he is active in his church and local politics.