Making Sense of the NFL and the Rights of Business Owners 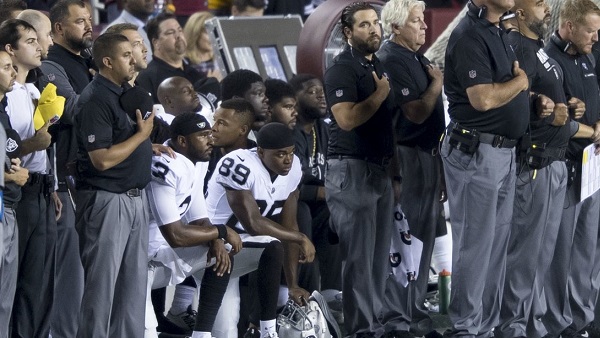 Everyone from sports analysts to rappers and even the president have weighed in on the issue. Is it really that confusing?

The NFL has been a ratings and revenue powerhouse for quite some time. Sports in general has enjoyed a prestigious place in our culture for years. Some would say that it has become a detrimental distraction to families that needs to be reigned in (I’m among those holding to this opinion).

As of late, however, sports and the NFL has been in decline.

We’re all familiar with the now highly publicized and politicized NFL protests started last year by former NFL quarterback Colin Kaepernick. Kaepernick decided to kneel for the national anthem rather than stand with his hand over his heart. He said it was a symbolic protest against racial violence and police brutality against minorities. From there it sparked a controversy that has continued from last year’s NFL season to the present.

This year the story intensified as President Trump weighed in by saying that NFL owners “should fire” players that protest the flag and the national anthem. That single comment by the President has caused more controversy, tweeting, news coverage, and arguments than perhaps any single comment concerning this entire issue. That either tells us how powerful the president is, or how much the mainstream media doesn’t like him. You decide.

As the controversy continues the NFL is seeing ratings drop, advertisers bail, and revenues drop. Hey, everyone likes a good protest, until it starts affecting the bottom line. The NFL is, after all, a business. And right now, business stinks. Seeking to right the ship, the NFL held meetings to decide if they should make all players stand for the national anthem. Commissioner Roger Goodell, NFL owners, and the players union will discuss the issue and seek to enact a policy.

Some owners are taking matters in their own hands. It’s not surprise that outspoken and heavily visible owner Jerry Jones of the Dallas Cowboys has already told his team “If we are disrespecting the flag, then we won’t play. Period.” Jones is a long-time owner of the Cowboys and a career businessman. It’s really no surprise that he made this decision as it is good for business.

Of course not everyone liked the decision. A rapper by the name of Common blasted Jones for his decision to bench any player not being respectful during the national anthem. Common said:

“It’s an owner mentality. Like a slave owner mentality, to be honest. Like, ‘You gonna do what I say on this…Other people [are] choosing to put their hands over their heart. What makes that gesture better than somebody else who might be praying during the national anthem? Or if somebody says, ‘I’m kneeling for what I believe in,’ then they should be able to do that because that’s what this country is about.”

Clearly Common doesn’t understand business, ownership, or what “this country is all about.”

Here’s the bottom line. Jerry Jones owns the Cowboys. Every player on the team is an employee of Jerry Jones. As the owner, Jerry Jones has the right to create guidelines for his employees during “work hours” or, when they are on company time. As such, Jones is exercising his right as the owner of a business. As an employee you do not have to agree with the directives given by the owner. In the end, however, you either comply or face discipline.

Someone will be tempted to say that this isn’t fair. Why does one man get to tell his entire team what they can and can’t do? Well, it’s simple, he owns the team! They are his employees. It’s no different than any other business owner giving directives to his employees. For example:

All male employees must wear a tie.
No personal cell phones during work hours.
All requests for vacation must be submitted in writing.
Mandatory drug screenings will be conducted on all employees.

These are just some of the rules various employers impose on their employees. Not one single employee is forced to abide by these rules. If they refuse, however, the employer is justified in terminating the employee.

I want to make two points about these protests:

Point #1: What has any NFL player done, outside of kneeing during the anthem, to make a difference concerning racial tension? If the entirety of your protest is kneeing during a football game I question how strongly you feel change is needed. Are you engaging your community? Meeting with political and social leaders? Leading programs to create change? Anything?

For some this means that every player will stand during the national anthem or be benched. I support the right of that business owner.

For some it means no cake will be baked in support of same-sex “marriage.” I support the right of that business owner.

For some it means no employee can request off every Sunday for any reason. I support the right of that business owner.

For some it means Christians are not welcome to eat here. I support the right of that business owner.

This country used to believe in individual liberty. People were allowed to live and do business according to their convictions, even if others didn’t like it. That simply meant people were free to spend their money at the business, or go elsewhere. That value, that