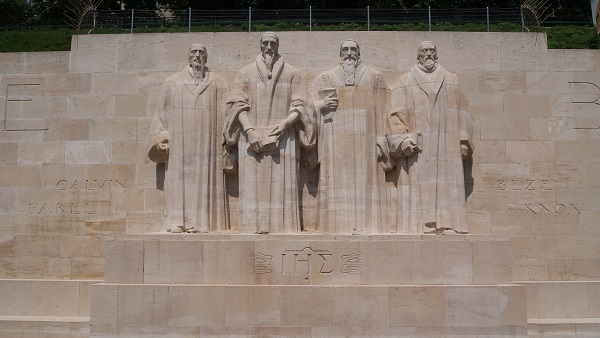 How did Jesus and his disciples turn the world upside down? They took up their cross. Confronting Satan’s brutal kingdom of deception calls for a careful study of Truth. That is why Europe’s Reformation always began in universities and study circles.

Prior to the St. Bartholomew Day Massacre in 1572, the French Reformation had won about 40% of the aristocracy and 48% of the population. Most of them were Calvinists, called the Huguenots. However, the German reformer, Martin Luther, inspired the first French reformers when Calvin was only 10-years old.

The Reformation reached France in 1519, two years after Luther nailed his 95-Theses. The king’s sister, Marguerite d’Angoulême in the city of Meaux, encouraged her bishop and tutor, Guillaume Briçonnet to cherish truth, more than ecclesiastical power.

The bishop invited Jacques Lefevre d’staples to start a study circle, the cenacle of Meaux. This circle translated the New Testament into French. Out of this circle studying the Bible came the first French reformers. These included William Farel — the man who persuaded John Calvin to stay in Geneva. Calvin’s writings, teaching and training of refugee-scholars made Geneva the new centre of reformation, including of France.

So, although, in the long run the “timid and cowardly” scholar-reformer, John Calvin had greater impact, the first Protestant church to be organized in France was Lutheran. This Church at Meaux chose as its first pastor a wool-carder — Pierre Leclerc. Paganised Christianity had already burnt his brother at Metz (France)!

This first Protestant church met in the home of Etienne Mangin. In a picture below, I am standing in front of this house. The shop ‘Franprix’ is on the ground floor. You can see Mangin’s name in the plaque between the four windows above the shop.

Sixty members of the church were arrested on September 8, 1546. They were dragged to Paris for a trial. Their crime? They had celebrated the Holy Communion!

On October 7, fourteen of them were burnt in the market place, behind where the three of us are standing in the other picture.

Today, the Protestant church is in an urgent need of reform in India and in many countries in Asia, Africa, and Latin America. Many liberal and evangelical churches, missions and NGOs have become mafias. They do much more than let loose their packs of hounds to bark and bite those who question corruption. Some of the Indian bishops intimidate their critics with gun-carrying goons. Their churches and institutions function under a spirit of fear.

The “evangelical” churches and forums are a matter of deeper concern because often they are funded and defended by powerful people. My previous posts have used Operation Mobilisation only as one example. I used it to illustrate corruption primarily because I had first-hand information of a few of the minor issues.

The real guilt — moral and/or theological — is upon those Christian leaders who have no interest in requiring Christianity to conform to God’s holiness. Not all these people are parts of evangelical mafias. There are plenty of pessimists who genuinely believe that Jesus can no longer reform His own body, let alone India.

No evangelical will say that Jesus has changed. They think that the times have changed. Jesus has become incapable of reforming because we are living in “the last days.” These days are worse than those days in France when the church used to burn the reformers alive. Now the bishops send ferocious dogs to bark at anyone who refuses to be bribed.

So, why can’t Jesus reform our nations?

Well, the ancient Jesus used to care for the nations. The post modern Jesus only saves souls for heaven. American individualism has succeeded in enlightening Jesus. It allows him to save souls in the West: in India, Jesus is also allowed to reach the unreached ‘people groups’ . . . in these last days He is not permitted to bless, disciple, and heal the “nations.” The evangelical Jesus has to function under American/OM MESSIOLOGY. Their dogs will prevent Him from cleaning up their mess.