Hysteria vs. The White House: Why It’s Worse With Trump 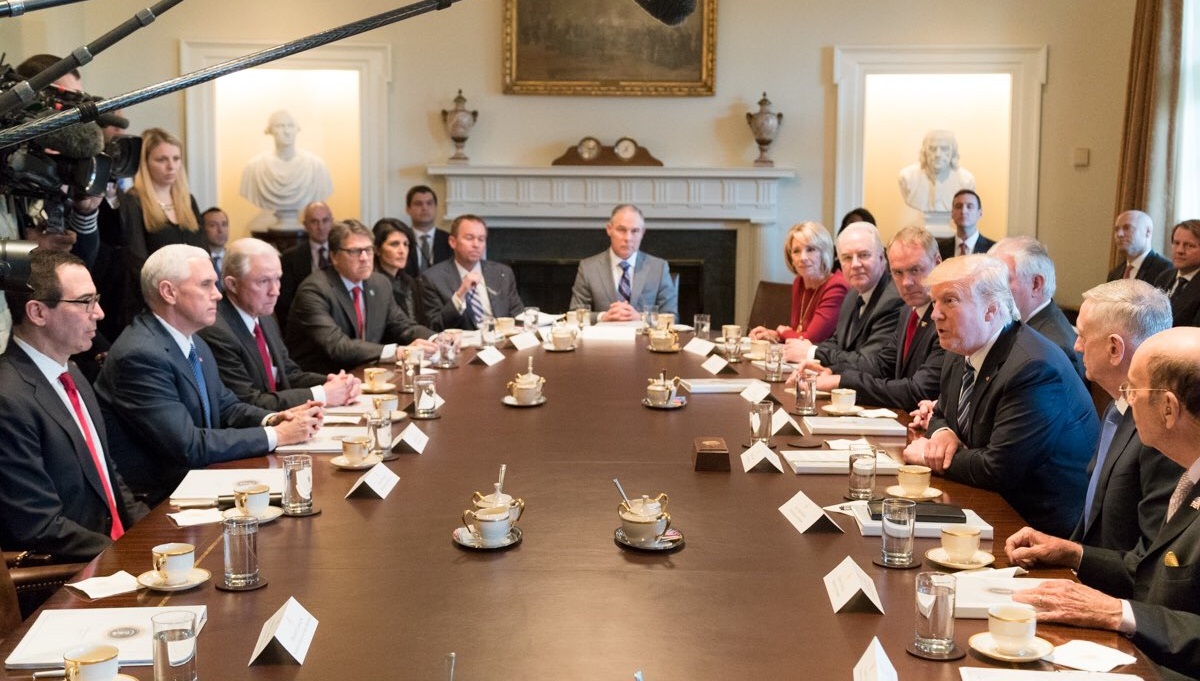 Pundits portray the extensive criticism of President Trump as an unusual event, an occurrence if not unprecedented than certainly unique in its extremity. The point a rather biased press seeks to convey is that, in their perception, the 45th President of The United States is an advocate of policies that are particularly dangerous, and hence inspires an exceptional level of condemnation.

It is a venerable historical tradition.

The bulk of the media banks heavily on its belief that the American public suffers with a minute lack of historical knowledge, and retains little memory beyond events of the past year or so. It is aided in this effort both by an academic curriculum that is woefully lacking in adequate teaching of U.S. history, and social media search engines that tend to downplay results that are contrary to the prevailing press mindset.

Media coverage of the Obama Administration was overwhelmingly favorable, indeed, almost fawning. The limited exceptions included only conservative talk radio, Fox News, and a very limited number of other outlets. This occurred despite that Administration’s extraordinary failures in foreign policy, its steps which prevented the U.S. economy from recovering from the Great Recession, the enhanced suffering of the middle class, its detrimental impact on race relations, and its unprecedented scandals,(including its use of the IRS to attack political opponents,) its attempts to ignore First Amendment protections (particularly in regard to those disagreeing with the White House on climate change,) its false statements in regard to Benghazi, and the bizarre sale of uranium interests to Russia.

But contrast that with what could accurately be described as the outright hatred displayed by the Fourth Estate for Obama’s immediate predecessor, George W. Bush. It was so extreme that the term, Bush Derangement Syndrome, (BDS) was coined by the distinguished columnist and psychiatrist Charles Krauthammer. He defined BDS as…

“the acute onset of paranoia in otherwise normal people in reaction to the policies, the presidency — nay — the very existence of George W. Bush”

Krauthammer outlined how the attacks were based more on emotion than logic. In his book, “Things That Matter,” he cites examples of the level of hysteria reached by Bush opponents, including defining the 43rd President as a Frankenstein-like figure.

Using hyperbolic language, inaccurate statements, and emotional rather than intellectual appeals has become something of a regular tactic, used far more effectively by the Left in presidential matters.

Today, President Ronald Reagan has become an iconic figure. Although arguably one of the most conservative U.S. presidents, he is now regularly invoked by politicians of all stripes. Even the most progressive president in U.S. history, Barack Obama, at times invoked Reagan’s example. But it was not always so. The media portrayed Reagan as likely to start World War Three, and, for good measure, also likely to destroy the U.S. economy.

Outlandish criticism is nothing new in presidential politics.

Perhaps the most salient example of over-the-top criticism of U.S. Presidents can be seen in the treatment of Abraham Lincoln. The historical site Civil War.org provides this example:

“’The illustrious Honest Old Abe has continued during the last week to make a fool of himself and to mortify and shame the intelligent people of this great nation. His speeches have demonstrated the fact that although originally a Herculean rail splitter and more lately a whimsical story teller and side splitter, he is no more capable of becoming a statesman, nay, even a moderate one, than the braying ass can become a noble lion. People now marvel how it came to pass that Mr. Lincoln should have been selected as the representative man of any party. His weak, wishy-washy, namby-pamby efforts, imbecile in matter, disgusting in manner, have made us the laughing stock of the whole world. The European powers will despise us because we have no better material out of which to make a President. The truth is, Lincoln is only a moderate lawyer and in the larger cities of the Union could pass for no more than a facetious pettifogger. Take him from his vocation and he loses even these small characteristics and indulges in simple twaddle which would disgrace a well bred school boy.’ this tirade was not the rant of a fire-eating secessionist editor in Richmond or New Orleans. It was the declaration of the Salem Advocate, a newspaper printed in Lincoln’s home ground of central Illinois…At the time he was sworn in, Lincoln’s ‘approval rating’ can be estimated by examining wintertime Republican losses in local elections in Brooklyn, Cincinnati, Cleveland and St. Louis, and state elections in Connecticut, Massachusetts and Rhode Island; by the observations of Henry Adams (of the presidential Adams’) that ‘not a third of the House’ supported him; and by the published reckoning of the New York Herald that only 1 million of the 4.7 million who voted in November were still with him. All these indications put his support in the nation at about 25 percent — roughly equivalent to the lowest approval ratings recorded by modern-day polling.”

“Donald Trump has done very little to justify the hysterical rage which has consumed his critics…, we should remember that a large part of the anti-Trump eruption is cultural. Trump is obviously neither a conventional US politician nor a standard-issue international statesman. These differences, mostly stylistic but with substantive implications, are terribly threatening to his opponents; for his supporters, they are beyond doubt among his most attractive attributes. Trump doesn’t light candles to establishment icons, doesn’t talk the way smooth liberals talk, and most assuredly doesn’t care what America’s mainstream media say.”

“The unhinged coverage of all Trump scandals, real and imagined, has cost the media in the eyes of the public, among whom only 39 percent said they had a ‘great deal’ or even ‘some’ confidence in news outlets last November…The media are correct in thinking they have an important duty in the Trump era. But the people are correct in noticing that the media is filtering everything through an obsessive hatred for Trump.”

What distinguishes the extreme criticism of Trump from that of his predecessors such as Lincoln, Reagan and Bush 43 is the attempt to attempt to invalidate his election.

Initially, violent protests erupted, with the threat of more to come unless somehow the Constitution was ignored and Trump was not inaugurated. Then came the criticism that he won by gaining the majority of electoral college rather than popular votes. That faded away, because it was rather swiftly pointed out that the newly elected president had the Constitution on his side, and this had occurred several times in the past. Calls for impeachment followed the President’s dismissal of FBI Director James Comey. However, it now seems that Comey’s record at the FBI was spotty at best, and the former FBI chief had sustained substantial criticism from both Democrats and Republicans. That approach failed to gain traction with the public.

That was followed by charges that members of his campaign had “colluded” with the Russians. That has proven to be a double-edged sword. Despite an all-out effort by Special Counsel Robert Mueller and his team, which contains a number of Clinton contributors, little has been uncovered that would seem to threaten the current White House. On the contrary, revelations of potentially illegal surveillance by the Obama Administration on its political rivals, and renewed emphasis on the highly questionable sale of uranium to the Russians during the Obama Administration, has been the unintended consequence.

The uranium sale may be the most potent point in demonstrating that it was the Obama Administration that should be charged with collusion—and that Mueller is less an objective investigator than a partisan politico inadvertently aiding those seeking to overturn the 2016 election.

“Anger at Robert Mueller is burning white-hot on the right and in conservative media, where calls for the special counsel to recuse himself from the investigation into Russian meddling in the 2016 election have reached a fever pitch…From Fox News to Breitbart and talk radio, conservative media has been drawing attention to Mueller’s relationship with fired former FBI Director James Comey and his hiring of Democrats for his investigative team. They also argue Mueller has gone far beyond his mandate of investigating Russian interference in the election. Conservative media has taken a new tack against Mueller in recent weeks, zeroing in on the sale of Canadian mining company Uranium One to the Russia state-owned nuclear firm Rosatom…The sale was approved by nine members on the Committee on Foreign Investment in the United States … while President Obama was in office. Mueller was the director of the FBI at the time.”

“…Mueller has a record that shows a man of fallible judgment…his … approach to evaluating evidence led him to fumble the biggest U.S. terrorism investigation since 9/11…”

To many Republicans, Mueller’s questionable investigation is a painful reminder how official Washington was used by the Obama Administration to wage an illicit repressive effort against its opponents, That era was characterized both the IRS’s now-admitted wrongdoings, and the Justice Department’s actions, which, under Attorney General Loretta Lynch, seriously considered criminally prosecuting organizations that merely disagreed with Obama on climate change.

While extreme criticism of a president is nothing unprecedented, the repeated attempts to overturn the results of a presidential election through a variety of tactics are a new and deeply disturbing development.

Frank Vernuccio serves as editor-in-chief of the New York Analysis of Policy & Government at usagovpolicy.com