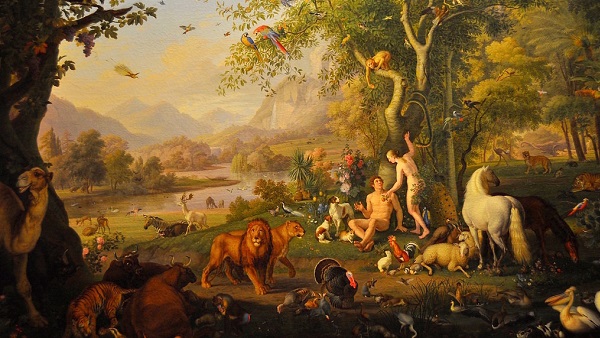 Adam and Eve in the Garden of Eden by Wenzel Peter.

When I switch on my TV, I can find endless debates about sexual abuse and harassment, but as far as I can tell the Biblical view is entirely absent. Christians participate in these debates, but I’m having trouble finding them saying anything different from the various political factions with which they are aligned.

The man and the woman are not equal: equal isn’t nearly good enough. If equality were the highest good, then there would be no reason to have both men and women. Instead of equality we have love, and love is based on difference.

The monster convinced the woman that if she stole food from God and ate it, that all her problems would be solved. The man watched while she ate, and when she didn’t die, then he ate the stolen food too. She was tricked, but he was not. So he had less excuse.

Then things got worse. The man and the woman felt like they had to hide from each other. They could not bear to be seen by the other. They girded themselves in Hagaroth, loincloths for battle, because they were now enemies.

When God came to rescue them, they were so confused that they ran from their Rescuer. They didn’t run away together, they ran away apart. The man said “I hid myself.” which is the very first time the word “I” ever appeared in the Bible. They were not ‘We’; he was an ‘I’, and she was a separate ‘I’. They did not share a common interest.

Since they were at war with each other and at war with God, it would not be good for them to remain strong, so the things in which they previously had been strong, were now turned into weakness. The earth would not yield its strength to the man. Bringing children into the world, a joyful thing for the woman, would not be mixed with pain and sorrow.

The garden period was over. God told them a hard truth. He told them them that in this state, the woman would long for the man, would have a desire deep in the heart of her being for something from him. But the man would rule over her, rather than give her what she longed for. They could not be fulfilled by each other alone, so this left them in a state of desire and conflict at the same time. There would be an uneasy equilibrium between them. The Bible is realistic that way. It tells us the truth. People who hate the Bible say that it is a book of fairy tales, but the truth is that it is the people who hate the Bible who tell fairy tales. They tell silly stories about perfect women vs. evil men or vice versa, stories in which men and women don’t need each other, stories in which men and women are exactly the same, lies that men and women can exist in this world without this uneasy equilibrium. The truth is that unless the man is willing to die for the woman, to undo his original act of cowardice and perfidy when he refused to protect her, when he betrayed her, then uneasy equilibrium of longing and domination is about the best that could be expected.

Millennia later, a man came into the world, and He too was tempted in a garden, but when soldiers who were doing the bidding of the monster came into the garden looking for someone to kill, He leapt up from His knees and stepped in front of the soldiers, offering His life. He fought the monster, and he sweated and was torn and bled and then He died. The fruit of the womb of the woman, He put himself back on the tree, returning what was stolen by the woman so long before. He did this not just as a king, but also as a husband. He undid, the original failure. He slew the monster, but in slaying the monster, He too was slain.