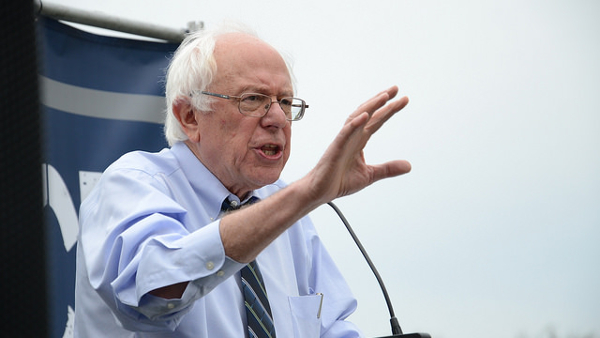 The Democratic Party continues to be roiled over ever-increasing reports of campaign mischief and unethical acts by the Clinton cabal. One of the most recent being Donna Brazile’s (ex-Democratic National Committee Chair) allegations that Hilary basically stole the primary election from Bernie Sanders. If true, the real election in 2016 maybe should have been between Trump and Sanders.

Now, beyond the cacophony of corruption charges against Clinton, the interesting thing here is the fact that America may have elected a dyed-in-the wool socialist for a major party’s Presidential candidate, had Hilary been able to run an honest race. This is a remarkable event in the U.S., until recently considered to be a basically Christian country.

How is possible that a 100% certifiable socialist could almost cinch the Presidential nomination?  And, this is in a country where there is still a plurality of Christians – meaning many Christians must have supported him?

It is understandable that non-Christians would be uneducable, not able to learn from the innumerable failed socialist attempts to ‘manage’ any country’s incredibly complicated economy.

But for Christians (possessing the mind of Christ, after all) to not only be blind to the reality of the multiple and manifest socialist fiascos and, to not be conflicted with the tenants of socialism versus their faith, is somewhat difficult to account for.

Maybe this is because both Christianity and socialism appear similar in that they both say that they care for the poor, the down-trodden and the dispossessed.

While Christianity does encourage charity and alms giving, socialism institutionalizes the helping of the poor.

Under the Christian system individuals give expression to the spirit of Christ indwelling them and gain virtue and merit by their voluntary charitable acts.

But under Socialism, the act of aiding the less fortunate is mandated and consequently there is no free-will act of charity. Hence there can be no merit or virtue attributed to those acts. They become merely slavish obedience to the required government statute.

Under Christianity people have a choice to do good or not. Under Socialism the elite rulers decide which ‘good’ acts everyone must perform and if you don’t obey the state will wield the sword against you.

This is the classic mistake of justifying unrighteous means because of the supposed good end to be achieved. The difference between an individual deciding to act in a righteous or an unrighteous way or, being forced to act in a ‘righteous’ (according to someone else’s idea) way is a deal-breaker when it comes to the working out of one’s own salvation.

It is also the classic case of human government trying to usurp the role of God to itself. Only it is not quite as nice as God, who gives us freedom – the state demanding and requiring obedience.

And, of course, the socialist state never carries out their acts of ‘charity’ in a Christianly way. When the Church administered welfare, relief was granted to the worthy poor (those willing to work) but withheld from the unworthy poor (those too lazy to work).

Of course, most Christians don’t need welfare relief as the faith teaches responsibility, caring for one’s own, the necessity to not be a burden on others, etc. This is why ‘salvation and uplift’ occurs as Christianity is embraced by a new people group.

But socialist governments grant welfare to all, regardless of their behavior, mostly aiding and abetting non-Christians behaving in sinful ways (you can fill in the gory details with about a nanosecond of thought). And, of course the supporting of immoral behavior only encourages more of the same.

For a worldly system such as socialism to destroy such a basic Christian tenet as charity being within the free-will sphere, places it outside of the possibility of Christian support.

Are Christians who vote for socialists ignoring Church teachings or, is the Church negligent in teaching their flock how to relate Biblical doctrine to contemporary issues?