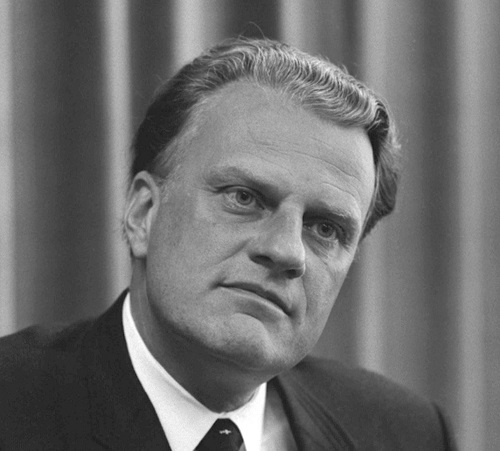 He preached to more than 200 million people in 185 countries.  In 2006 he appeared on the 2006 Gallup list of the 10 most admired men in the world for a record-setting 50th consecutive year.  Billy Graham passed away at age 99 on February 21st.   Does it matter?  Do we think of a life that peaked decades ago or of a person and presence that remains relevant at this very moment?  Me thinks it’s the latter.

Billy Graham was, apart from a lifetime of saving souls, the greatest force for unity within Protestant evangelicalism since Martin Luther unleashed a cycle of endless fragmentation by knocking on the Wittenberg door 501 years ago.  Will there ever be another?

I remember when “Billy” came to Vancouver in 1984.  The Billy Graham Evangelistic Association (“BGEA”) would engage in 2 – 3 years’ preparation for a crusade and then it would pull off the event with the help of thousands of church-fed volunteers.  The whole process was an exercise in unity building among the Christian community in Vancouver, as it was in other cities where the crusade marched in.

A crusade in a city gave Christians a profile and a sense that their presence could be felt beyond their hardwood pews when they engaged in a common effort.  And though there was always some degree of being self-conscious of the pubic exercise of trying to save souls it was not something to be too embarrassed about with Billy leading the way.

Years later I was living in Hong Kong when Billy came to town in 1990.  Like Vancouver and other cities, there was a buzz in the air and great anticipation.  Every culture and continent came under the dominion of going out into all the world to proclaim the Gospel.  It was the same dynamics as I saw in Vancouver years earlier—a wide range of Christians could gather for a concerted effort and to have an impact in the wider community.

What struck me most was that when Billy Graham and his crusade came to town virtually all the churches could agree:  this was a good thing.  And those that weren’t quite so evangelical, and even cringed at proclaiming too loudly that “Jesus is the Answer,” were muted in their criticism.

One aspect of Billy Graham’s ministry was not just what he was doing for sinners but what he was doing for believers.  Billy Graham was a force for unity in a perpetually fragmented Protestant evangelical community.  That type of unity wouldn’t be seen again—until the next time Billy came to town, if he ever did.  He couldn’t be everywhere—though he spent a lifetime trying.

I always marvelled that the churches that we in our denomination never talked to or collaborated with were now—for the fleeting purpose of the Crusade bandwagon—our comrades in arms.  After the Crusade we would, of course, go back into our denominational bunkers.

Billy Graham was a one-man force of unity.  He could inspire people to higher ideals.  He had no official title as leader of Protestants worldwide—he simply earned it as an icon with a global presence.  I saw him on TV countless times over the years, watching his sermons in giant football stadiums in cities like New York.  His presence signified that something important was happening, both a revival within and outside the Christian community in that particular city.  He was a southern Baptist, but people didn’t think of him that way.

He was sometimes called the “Protestant Pope”—by credibility and personality drawing people together.  Billy Graham was a magnet that created unity among a 500-year tradition of Protestant fragmentation.  He had drawing power, personal credibility and a track record of “success.”  He saved souls.  In addition, he was deemed a “celebrity”—a big name, with credibility.

Most importantly, he honed a sense of what can bring people together—and stayed away from things that were divisive.  Billy Graham had a long track record of integrity and personal credibility.  For a life that long, yes, there were inevitable hiccups.  He learnt a painful lesson by getting too close to tricky Richard Nixon.  When recordings made by President Nixon were eventually released, they included a conversation where Billy Graham made some misguided comments.

The one-time indiscretion, however, is dwarfed by a lifetime of impact.  After Nixon, he remained close to both Democrat and Republican US Presidents—but not too close.  He carefully avoided political quagmires.

Will there be another force for Christian unity on the scale achieved by Bill Graham?  The first place to look is with his heir, Franklin Graham, who now heads the BGEA.  The focus of Franklin’s ministry is a modern-day adaptation of the crusade in the form of a “Festival of Hope.”  Graham the Younger is endeavouring to carry the mantle.  Not an easy task, as demonstrated at his Festival of Hope in Vancouver last March 3-5, 2017.

According to the BGEA, the Festival of Hope was a success.  Dave Ingram, Canadian festival director, BGEA, reported that there was a total attendance of 34,406 over three days; 1,929 total commitments to become a Christian; 65,429 viewed the Festival online (from 76 countries) along with 466 commitments online; 389 people make commitments during the Christian Life and Witness Courses; and altogether there were 2,774 commitments made during the Festival journey.

Franklin Graham’s visit to Vancouver, however, got predictably mixed reviews in the secular media—but an unexpectedly frosty reception in parts of the Christian community.   A coterie of Roman Catholic, evangelical and mainline Protestant clergy, representing (at least, on paper) more than half the city’s one million Christians, wrote a public letter scolding Graham.

The signatories disapproved of the way Graham said, “all Muslims should be banned from the U.S. because Islam is a ‘very evil and wicked religion’ at war with the Christian West” and for “portraying the election, administration and policies of U.S. President Donald Trump as intrinsically aligned with the Christian church.”  Unfortunately, rather than the festival being a rallying point for Christians throughout the city, it became a source of division.   The apple fell far from the tree on this one.

It seemed that certain Christian bodies were more concerned with maintaining a sanctimonious stance and highlighting a tainted prophet (hardly a novel situation; see the Old Testament), rather than proceeding with the greater goal of saving souls.  Did those objecting, subsequently organize their own variation of a festival of hope?  Nope.  Still waiting.  Rather than working at collaborating, there was a greater value placed on looking reasonable in the eyes of a critical mainstream media rather than unity.

Perhaps a fellow who run’s Samaritan’s Purse and does a world of good, himself deserves some Christian understanding.  This is not to say that Franklin Graham shouldn’t be more careful with his words.  Absolutely.  His father learned that lesson.  The Bible talks about “being above reproach.”  That’s a tall order, but that is the challenge.

Franklin Graham doesn’t have the star power, track record and standing of Billy Graham.   Regardless of motives and attitudes of those opposing Franklin Graham’s visit to Vancouver, the net result was a fractured Christian community on display to snickering onlookers.

No Christians came out of that situation looking good.  The major take-away:  unity within the broader Christian community is fragile and ephemeral.  Without strong glue there is little to hold Christian unity together.  The situation in Vancouver was a sad reflection on the Christian community—the Franklin Graham visit was a cause of divisiveness.  Regardless of the result, the event was not the unifying event that were the hallmarks of Billy Graham crusades in the past.  Even Christians stayed away from a Christian event.

If only Billy could come to town one more time—but, he won’t.  Has Christian unity died at 99?