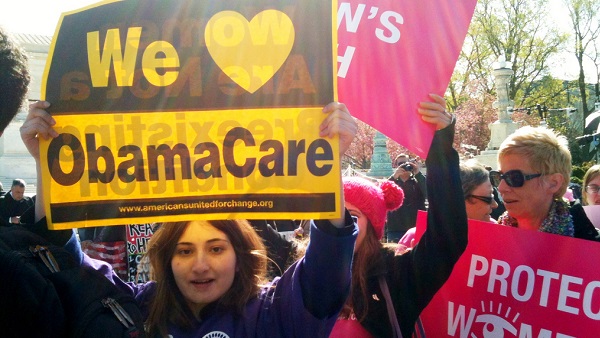 Rally in support of the Affordable Care Act in front of the US Supreme Court in Washington DC. (CC BY 2.0)

The American healthcare system is ranked 37th in the world and last out of all developed nations according to the World Health Organization, the Organization for Economic Cooperation and Development, and other interested organizations. The system is really bad, so bad, it is said, that we should adopt a European-style system so we can all be good, healthy citizens like they want us to be.

A misconception of that central-planning mindset is treating a national market for healthcare as one massive, monolithic system, “run” effectively by politicians and bureaucrats. It is not, and they cannot. Healthcare is simply the interactions of millions of different consumers and providers over a very wide geographical area. It is like the national computercare system. People and organizations buy and sell technology products and services, and millions of consumers and providers buy and sell health services.

The fundamental difference is that healthcare is extremely political, with tremendous government interference into almost all aspects of it, whereas computercare has much greater independence from federal and state bureaucracies. The result is that healthcare is a mess, with rapidly increasing prices and increasing dysfunction, while computercare experiences declining prices, even as quality and capacity increase.

People will point to European countries and say “Why can’t we be more like them. Their average costs are less and health outcomes are better.” The key question as to cost is why it is so. The more we have embraced the European mentality over the last several decades, the worse the situation gets, as we have seen accelerate with the Patient Protection and Affordable Care Act. The egalitarian principles of European socialists are not compatible with the American emphasis on individual rights.

Note that 50 states over an area of more than three million square miles, with different cultures, different heredity, and different environmental factors are all aggregated into one measurement, even though there are at least 50 different “systems,” many of which are bigger than many European countries. It would be more legitimate and less distorting to compare individual states with other countries, though still not very helpful.

Even with dysfunction in American healthcare, though, is it really true that health outcomes are better in Europe? It is not nearly as clear as the reports try to make it out to be. The United States has a significantly higher rate of low-birth-weight and premature births, and infant mortality is much higher among such babies. Most of the risk factors for such cases have nothing to do with the healthcare system. The United States has a significantly higher rate of deaths and injuries from homicide, suicide, motor vehicle accidents, and so on, for whatever reason. All of these things affect the average lifespan, but none of them is related to the quality of the healthcare system.

The United States has an epidemic of obesity, diabetes, heart attacks, stroke, and cancer. These all tend to cause early mortality, but none are directly caused by the healthcare system. Indeed, the biggest cause is the politicization of nutrition. The standard high-carbohydrate diet officially recommended by the USDA, an organization for the promotion of farmers, including grain growers, and adopted by most health-related organizations, marks the beginning of the dramatic rise in these diseases since the 1970s, when it was adopted by politicians.

There are some relatively simple steps to take, but socialists won’t like them. The way forward is taking back healthcare and nutrition from arrogant politicians, de-Europeanizing what we already have, and allowing and expanding competition in the market, something that has been discouraged for decades. It includes decoupling healthcare from employment, getting rid of mandates, letting insurance companies offer whatever plans customers will buy, including low-cost catastrophic-coverage plans similar to the old major medical plans, and subsidized risk-pools. The more free the market, the better for everyone, including the poor.