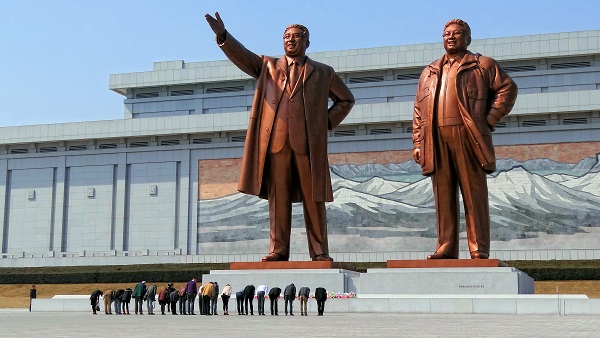 North Korea is the most atheistic place on earth. Christianity is completely forbidden there. There is no right to religious liberty recognized in law there.

So you might be surprised to hear that its capital city, Pyong Yang, was once known as the “Jerusalem of the East” because it was the center of missionary activity in East Asia.

Many Koreans were told the Gospel story and decided that they want to serve Jesus as their master. But Kim il-Sung, Kim Jong Un’s grandfather and the founder of the regime, heard those stories and instead of deciding that he wanted to be a disciple of Jesus instead decided that he wanted to be Jesus himself. Sung re-wrote his own biography in ways that paralleled the Jesus stories. At his birth, the Sung nativity myth proclaims, the mountains shook. At a key moment in Sung’s life, a dove descended from Heaven.

The Gospel has power, a power which can save, or a power which when plugged into improperly can burn out the old institutions of society like so many obsolete circuit breakers.

Something similar happened in the Taipang Rebellion, during the mid 1800s, in which a failed young man from a peasant village heard the Gospel accounts and concluded that he was Jesus’ younger brother and launched, on that basis, the bloodiest war in modern Chinese history and one of the bloodiest wars in human history. The stories of the Gospels deeply resonate with human nature, so much that they have incredible power even to those who reject and co-opt their fundamental message.

The South went the other direction. It embraced the Christian world view and with it the institutions of the free society. My friend, the late Alan Meltzer, put the South Korean miracle in the center of his famous seminar at Carnegie Mellon University because of its near miraculous transformation in human standards of living. It went from a medieval standard of living to great prosperity basically from 1980 to now.

That’s why we show an image of the Korean peninsula at night in our resources page at Vident Financial.

The difference between the North Koreans and the South Koreans is not race. This is a nation cleaved in half during the live time of many still alive. It’s not language; it’s not weather. It’s ideas. Some lead to life, some to death.

One could look at the two nations on either side of the Jordan, Israel, and the Palestinian territories. The Jews and Arabs are cousin Semites, descended from the two sons of Abraham. There is no invisible barrier giving them different weather. The languages are actually surprisingly similar.

Haiti and Dominican Republic, two halves of one island, but with completely different standards of living.

Here’s an interview with Rob West and Steve Moore of the MoneyWise radio show, in which we talk about the Korea story, and even give some helpful (I hope) hints about how to invest in an environment like the current uncertainty on the Korean peninsula.