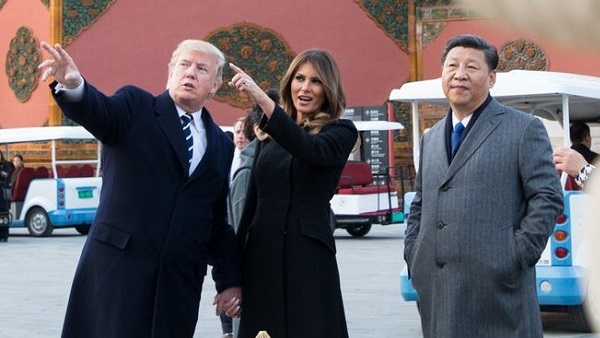 President and Mrs. Trump in Beijing, 2017

There has been significant criticism of President Trump’s tough stance on trade deficits and unfair practices both with China and America’s allies and neighbors. Opposition to the White House move has come not only from the usual political opponents, but even allies within the GOP.  Indeed, Republicans who would never dream of endorsing unilateral disarmament in weapons negotiations appear all too willing to adopt that concept in economic relations.

Interestingly, much of the media, while criticizing the White House for confronting Canada and Europe for their trade practices and threatening retaliatory measures, neglected to mention a key proposal Trump made at the recent G7 meeting: the elimination of all tariffs.

While bluntly confronting Canada and NATO partners and lumping them in with the adversarial Beijing regime may seem harsh, the reality is that the United States economy and job market has suffered significantly.  Remedial steps are required.

The Alliance for American Manufacturing  reports that “Unfair trade practices like dumping, export subsidies, and currency manipulation drove the loss of more than 6.1 million U.S. manufacturing jobs from 1998 to 2010. Today, there is no greater threat to the resurgence in American manufacturing than widening trade deficits and unfair trade practices that go unchecked. New trade agreements must give American workers and businesses tools to aggressively push back against unfair trade practices like currency manipulation, and create a level playing field. Trade agreements already on the books must be strictly enforced. And we need our policymakers to develop and implement a plan to end our trade deficit in manufactured goods, which directly threatens a potential resurgence for American manufacturing.”

There has been a great deal of angst invoked about the White House’s opposition to Canadian trade practices, but very little discussion about how severe Ottawa’s trade barriers have become.  That indicates the dissent to Washington’s tough new stance is based more on politics than practicality.

By far, the greatest offender is China. The Clinton Administration vigorously pursued greater openness to trade with China, and the results proved harmful both to the American economy as a whole and to U.S. manufacturing employment in particular.

The U.S.-China Economic and Security Review Commission’s 2017 “Report to Congress” disclosed that,

“The U.S. trade deficit in goods with China totaled $347 billion in 2016, the second-highest deficit on record. In the first eight months of 2017, the goods deficit reached $239.1 billion, and is on track to surpass last year’s deficit. U.S. companies are feeling increasingly pressured by Chinese policies that demand technology transfers as a price of admission and favor domestic competitors. According to a survey by the American Chamber of Commerce in China, 81 percent of U.S. firms doing business in China reported feeling less welcome in 2016 than they did in 2015. […] China’s foreign investment climate continues to deteriorate as government policy contributes to rising protectionism and unfair regulatory restrictions on U.S. companies operating in China. The newly implemented cybersecurity law illustrates this trend. The law contains data localization requirements and a security review process U.S. and foreign firms claim can be used to discriminatorily advantage Chinese businesses or access proprietary information from foreign firms.”

Beijing’s offenses range beyond mere trade barriers. China is the world’s principal sponsor of intellectual property theft, which costs the U.S. economy as much as $600 billion annually.

According to The Commission On The Theft Of American Intellectual Property,