Is It Better To Be Rich Or, Poor? 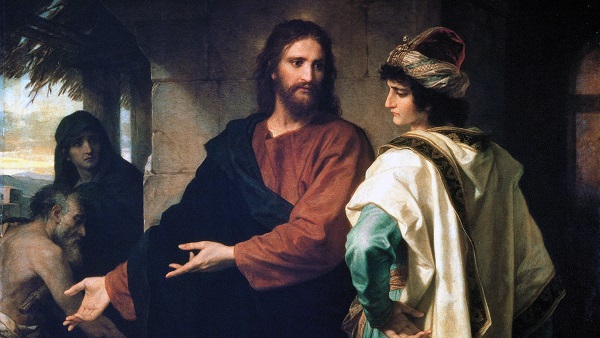 In the ancient world wealth was often acquired through the power to oppress, commonly being accumulated through slave labor.

Today, of course, slavery of that type is virtually unknown in the Western world and instead of stealing wealth from one another, we cooperatively work together to create new sources of wealth.

In the ancient world, James had this to say about the poor and the rich:

My brethren, do not hold the faith of our Lord Jesus Christ, the Lord of glory, with partiality.  For if there should come into your assembly a man with gold rings, in fine apparel, and there should also come in a poor man in filthy clothes, and you pay attention to the one wearing the fine clothes and say to him, “You sit here in a good place,” and say to the poor man, “You stand there,” or, “Sit here at my footstool,” have you not shown partiality among yourselves, and become judges with evil thoughts?  Listen, my beloved brethren: Has God not chosen the poor of this world to be rich in faith and heirs of the kingdom which He promised to those who love Him?  But you have dishonored the poor man.  Do not the rich oppress you and drag you into the courts?  Do they not blaspheme that noble name by which you are called?

Today, things have been put on a much more equal footing.  The poor have been enfranchised with broad based welfare programs including, food, cash, rent monies, health care, even cell phones!

The largess of our society towards the ‘needy’ sometimes leads to unexpected results.

A contractor friend of mine, on a job for a welfare recipient (paid for by us, the taxpayers) tells the story of heading down the stairs into the basement only to have his way impeded by a massive pile of clothes, many of which still had their sales tags on them.

When he inquired, he was told that it was stupid to launder clothes as they were amply supplied with the enough “free” money to buy new ones – they would wear them once and discard them into the dungeon!

Sometimes the poor are unmerciful, never satisfied with what they can get for nothing.

The playing field has been levelled:  Since we are all communists now (public policy #1 being that we are all entitled to have our needs met) the producers, the responsible, the diligent are required to provide for the non-producers, the irresponsible and the non-earners.

You could almost make the case that today the poor are oppressing the richer, making them toil on their behalf.

The poor have been given preferred status with “equal employment” laws, workers compensation laws, liberal bankruptcy laws and, time after innumerable time, the courts fail to cast just rulings in order to redistribute the wealth instead.

In fact, it seems that the courts now prefer the poor over the rich.

I know of one case where a company was sued for discriminatory firing and it turned out that the foreman making the firing decision was black, the person fired was black and the judge ruled that it was racial discrimination!

With a judicial system like this, is it the rich who prevail by dragging their adversary into the courts or, the poor who are shown preference as being downtrodden and needing relief?

However, time does not change all things.

James faults the wealthy for blaspheming the name of Christ and I certainly would not say that things are any different today than they were then.

It seems that every pip-squeak billionaire full of bloated self-confidence because of his financial success, declares loud and strong the triumph of man’s scientific accomplishments, mans’ capacity to create and shape his own future – without God, of course and, the necessity for us to forgo the outmoded psychological crutch of religion.

Every time another one of these hubristic boasters spouts off, James is vindicated and we are given another example of the evil temptation of pride to blind us to our dependence on and neediness of God’s good will.

All of which only goes to show that wealth or, poverty makes not the crime.  Rather the crime is in the getting, to the extent that we are responsible for the situation we find ourselves in.

Poverty can be obtained virtuously as well, as many religious take on the vow of poverty in order to serve God and man to the full extent of their capability.  Or, poverty can be obtained sinfully through sloth, laziness, taking when the ability to give is present and selfishly trying to get the most from others with the least amount of exertion.

As Paul says in Romans, “I know and am convinced by the Lord Jesus that there is nothing unclean of itself…”

Our circumstances, rich or poor, have no inherent morality.

We the people, only our sorrowful sinful selves, can create virtue or sin, as we adhere to or, rebel against the moral code established by the One who is far above us.