Kavanaugh’s Not The Left’s Enemy, The Left Is Its Own Enemy 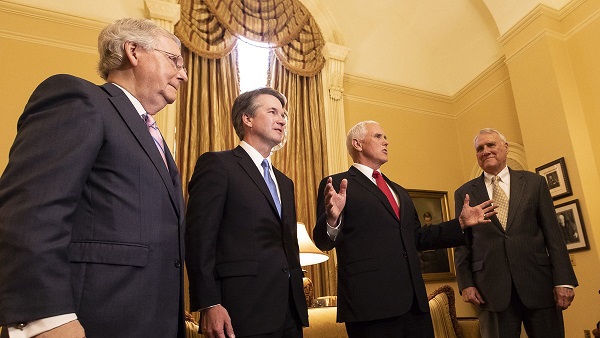 A recent conversation with a left-leaning relative yielded the concern that Justice Kavanaugh would do great harm to gay and women’s rights.   I pondered his concern for a few days and concluded that the enemy of the left is the left, and not a conservative judge.

We see this play out in the world of marriage.  God created marriage as between a man and a woman.   This can never change if morality is from God.  SCOTUS, deciding that ‘morality was from man’, ushered in to existence same sex marriage.  With God no longer forming the foundation of marriage, the foundation became a ‘loving, committed relationship’.  With that as the foundation, same-sex couples can now meet that standard and marry.   Since the adage still holds – give an inch and they will take a mile – I truly believe that we will see an effort push this envelope as far as possible.  Initially, Bob and Carol could marry.  Now, it is Bob and Ted.  It won’t be long before Bob, Carol, Ted and Alice want to get married as they will claim to be in a ‘loving, committed relationship’.  It won’t be long until two siblings want to formalize their love for each other.  And, do not be shocked when Aunt Martha wants to formalize her loving, committed relationship with her ‘comfort animal’.  And yes, they will have a reasonable basis for victory.  Once we shatter the foundation of morality, there is no way to rationalize stopping the extent to which people will take things.

Another example is the sexualized culture we live in.   I have no concerns with my kids watching older movies and TV shows because they were clean.  Nowadays, I have the remote in hand, ready to change the channel if inappropriate content appears on the screen.  What has changed?  The source of morality has changed from God to man.  Do you find it ironic that the Women’s March on Washington was led by Hollywood elites like Asley Judd and Madonna –   two people that make their living in an entertainment world that thrives on the objectification of women? While the stated purpose of the march was to protest Trump, they should have been protesting their own industry.  It is rare to find a TV show or movie that does not highlight sex in some manner – either through scantily-clad women, sexual themes, or teasing the audience in hopes to get them to watch a little longer hoping to see ‘something’.  With the foundation for sexual behavior broken, there is no right and wrong anymore.  This is why the personal lives of many entertainers are a mess – divorce, depression, drugs, affairs, and suicide all run rampant.  Is it any wonder why Bill Cosby is in jail, Harvey Weinstein may make a guest appearance, and the casting couch has become the norm for movie auditions?  When women give in to their own objectification, then seeing them as equals to be cherished and respected by men goes out the door.

The enemy of the left is the left because their choices effectively remove moral foundations.  I am not saying that all the left is without morals, they just struggle with recognizing the unintended consequences of foundation-destroying social experiments. In any political movement, there is always the fringe element that takes things too far.  Once you open Pandora’s box, you cannot close it.  The left has opened Pandora’s box one too many times, and the rest of the country is beginning to fight back.  The 2018 midterms ought to be interesting!

The choices of the left remind me of Jesus’ parable of the wise and foolish builders from Mark 7: 24-27:

I trust that the confirmation of Jude Kavanaugh will help put our nation back on a firm moral foundation.